CapoVelo.com
CapoVelo.com - | Life on the Road with Soigneur Sara Clawson and the Twenty 16 Team
44122
post-template-default,single,single-post,postid-44122,single-format-standard,no_animation 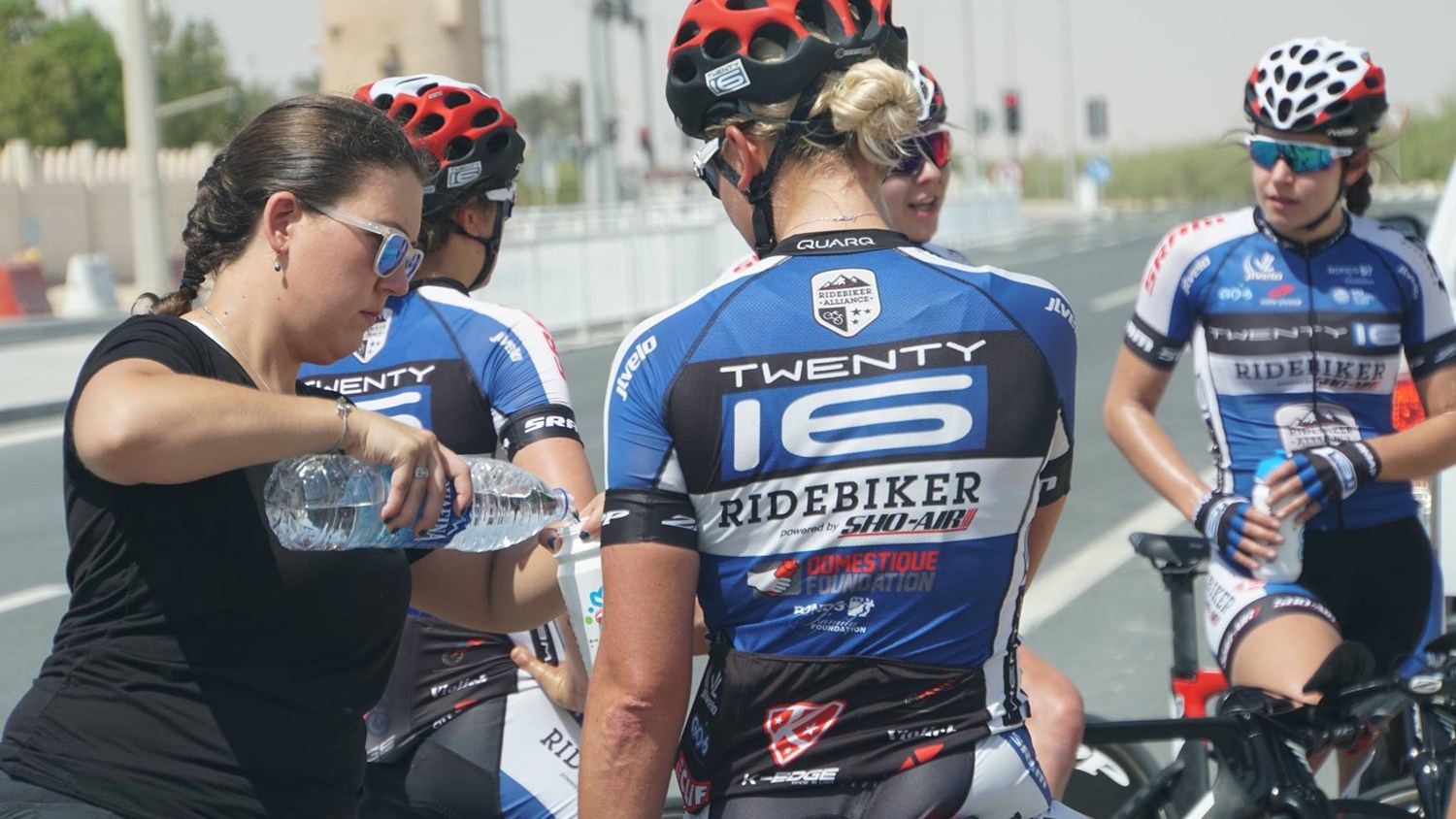 Ask Sara Clawson what her job as soigneur entails on a typical race day, and a hideously long list comes pinging back via e-mail, which she finishes off with “that’s it in a nutshell.” One big nutshell.

It would take up far too much space to print the list here, but one thing is sure: whatever is required, she’s got it covered. Sara Clawson has a Master’s degree in sports medicine and is currently pursuing a doctorate in kinesiology. But this qualified massage therapist, who also has her own practice in Greensboro, North Carolina (USA), does not shy from the more menial every-day duties of soigneur. As she points out:

“Soigneurs are to cycling what grooms are to race horses.”

“They provide every detail of care a rider receives on and off the bike. They are massage therapists, medics, advocates, nutrition and hydration specialists, psychotherapists, chauffeurs and trusted friends.”

For Sara Clawson, tasks such as preparing food and bottles are part of the bigger picture of keeping the team safe, healthy, successful and functioning smoothly: “It’s not all about massages and excitement; the details matter.”

While nearly all soigneurs have an advanced qualification in sports medicine, the ins and outs are learnt on the job. And it’s not suited to everyone: “Soigneurs keep a cool head in extreme conditions, improvise constantly, and provide the best care possible with often limited resources.”

They also do the grocery shopping, cooking, washing up and laundry, they prepare bottles and musettes, they clean the team vehicles… a lot of it is far from glam. So why choose to do it?

For Sara Clawson, the trigger came when she saw the profession of soigneur in a list of the ‘10 Worst Jobs in Sports.’

“Soigneur was number 9 and I thought ‘that sounds like the ticket’.”

Her first experience was as a volunteer for a junior development team at the Tour de l’Abitibi in Canada: “It was the hardest work I have ever done for free, and I loved it.”

Then came a stint with USA Cycling working mainly with junior men but also the Under-23 and women’s squads. For the last few years, Sara Clawson has been attached to the American-registered UCI Women’s Team Sho-Air Twenty20 (formerly Twenty 16 p/b Sho-Air). In 2016 she worked for them full-time, but this year is working on a contract basis to accommodate her studies and private practice.

“When the soigneur life is good, it is really, really good. When it’s bad, it truly is one of the worst jobs in sports.”
She continues: “I like the dynamic quality of life on the road, the variety of things I get to see and do, and the excitement of racing. I also very much like being home with my husband and our dogs, and the calm predictability of a steady stream of clients in my office. Both have their perks and I am very lucky that I get to choose where I want to be.”

Of the multitude of tasks that fall under the responsibility of the soigneur, one of the scariest is refuelling the team in the feed zone: “It takes a lot of nerve to stand one’s ground when riders are galloping by at 50km/h. I just have to trust that their self-preservation instincts are as strong as mine!”

She will never forget one Kermesse race in Belgium where she was handing out bottles “as fast as humanly possible” to between 12 and 14 USA junior riders. One rider caught not only the bottle, but also his soigneur’s thumb, wrenching her arm behind her. It took a year of physical therapy to recover from the resulting torn rotator cuff, that at one point she thought had put an end to her massage career.

Life on the road with a team is full of moments, good and not so good, that will remain engraved in Sara Clawson’s memory forever. A highlight is the women’s team time trial at the 2015 UCI Road World Championships in Richmond (USA). Twenty 16 p/b Sho-Air was one of the early teams to set off and a fast time saw them occupy the hot seat for quite some time.

“The girls were exhausted at the finish and it was a real maze going through the Convention Center to get to the hot seat. I was busy wiping their runny noses and cleaning up their dirty faces, oblivious to the fact that it was all being filmed live on TV! But it was so neat being part of that excitement after a good performance.”

Not so much fun was the same event a year later in Doha, which she missed entirely after being blocked from driving onto the course and, while trying to find a detour, got lost in the desert with the Team Representative Nicola Cranmer: “Google Map didn’t seem to work too well and all signs were in Arabic. We suddenly realised we were somewhere that two lone women probably shouldn’t be. Finally, we saw a bus and could follow it back to a more populated area. Nicola was desperately trying to get a live feed of the racing but we missed it all and didn’t even make it to the finish.”

Working with men and women

Having worked with both women and junior men, Sara Clawson has noticed some key differences between the two: “I love them both, but I have more in common with women cyclists as we’re largely around the same age and have the same things going on in our lives – marriage, family, aging parents, figuring out our future careers. With junior men, I’m almost old enough to be their mother and there is more of a mentor dynamic.

Contrary to popular perception, she has not found women to be more emotional than men: “Passion runs high in the heat of competition for both men and women,” she confirms, adding that the soigneur’s role is to cope with the athletes’ physical and emotional states: “Soigneurs are on the front lines of the battle against fatigue, injury, dehydration, emotional exhaustion and the agony of defeat.”

It is this variety and fast-paced nature of the work that appeals to Sara Clawson, but she is aware that this is not something she will be doing through to retirement age: “I recognize that I don’t have an infinite career in full-time massage. I think I have maybe 10 years left before my hands aren’t up to it, so I will most likely matriculate into the education side. Hence the doctorate.”

Eventually, she would like to develop a training program so aspiring soigneurs can get a good grounding rather than rely solely on stressful on-the-job training. One thing for sure is that this former collegiate cyclist, cycling fan and adventure lover will never cut herself off completely from the cycling scene.

“I will always love being around bike races and bike racers,” she says.