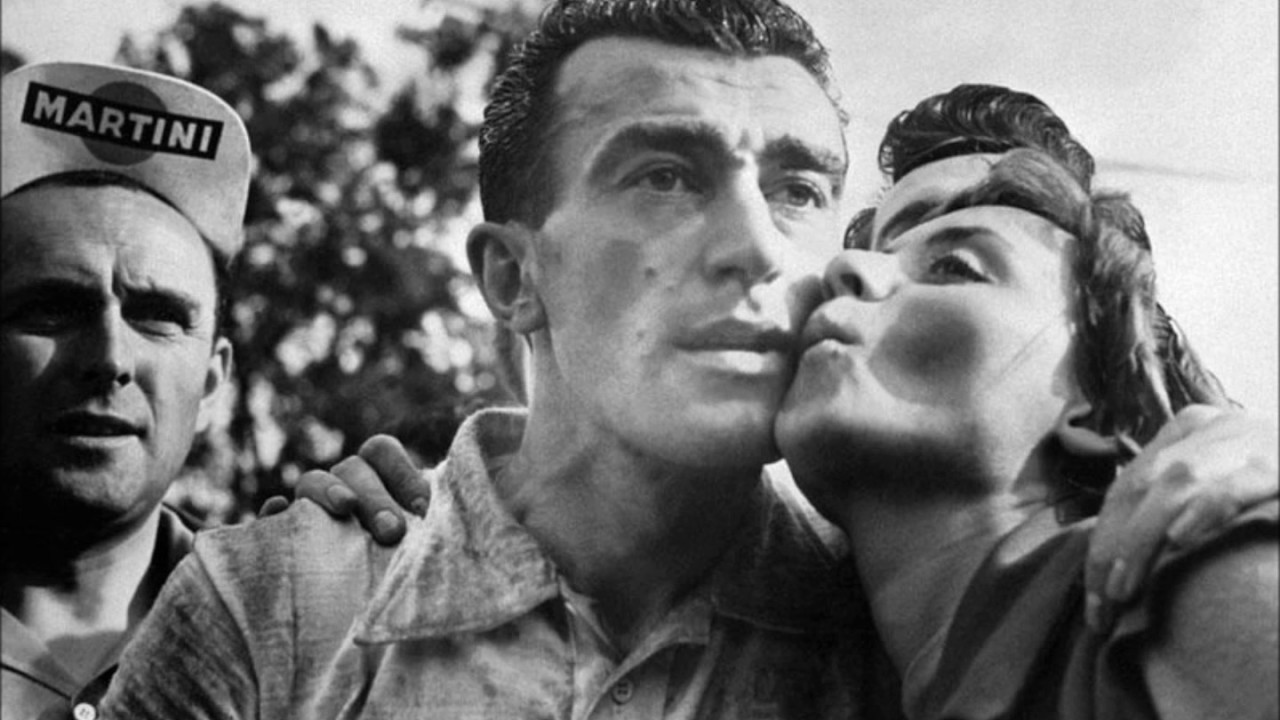 The French rider is best remembered for being the first to win three consecutive Tour de France titles, which he achieved in 1953, 1954, and 1955.

In all, he won four out of the five Monuments of cycling.

Bobet was blessed with natural ability and a smooth pedaling stroke, but to many it was his dedication that made him a champion.

Indeed, Bobet’s training practices are what made him legendary amongst his rivals, implementing a fierce training regiment that was equally focussed on polishing his sprinting skills as it did his climbing prowess.

Bobet was born one of three children above his father’s bakery in the rue de Montfort, Saint-Méen-le-Grand, near Rennes.

Word has it, that his father gave him a bicycle when he was only two-years old, and within 6 months he was able to ride distances upwards of 6 kilometers (3 miles).

Bobet entered his first race at the age of 13, a 30 kilometer event that saw the fledging young rider finish second in a sprint. After that, he continued to race in his local area as an amateur, winning a handful of notable events.

In 1941, he qualified for the final selection of what was widely considered the unofficial French Junior Championship, the Premier Pas Dunlop.

Two years later, he finished sixth in the Montluçon race, which was won by Raphaël Géminiani, who would later become a professional teammate and rival of Bobet’s.

After World War II, Bobet applied for a professional license upon leaving the army, but instead received one for an independent, or semi-professional.

This benefitted Bobet greatly, as he was able to compete in both professional as well as amateur races.

For instance, he was able to enter events like the regional Brittany Championships, while also being eligible to race in the National Championships in Paris, claiming the title of the latter in 1946 after riding clear of the peloton and catching the remaining two leaders.

Borbet subsequently turned fully professional that same year with the Stella team, which was a bicycle factory in Nantes.

Stella was a small team that rode mainly in Brittany. However, in May of 1947, Bobet and two other members of the team rode the Boucles de la Seine race in Paris, claiming a solo victory by six minutes over the peloton. This triumph earned him an invitation to ride in that year’s Tour de France.

Unfortunately, the unexpected toughness of the race forced Bobet to abandon on the ninth day in the Alps, during which time he was seen crying along the climbs, thus earning him the moniker the “cry-baby” of the peloton.

Veteran rider René Vietto later referred to him as La Bobette, a mock feminization of his name, while the cycling historian Dick Yates wrote:

“He brought down the scorn of the press and everyone quickly wrote off this ‘cry-baby’. René Vietto was in the yellow jersey as leader of the general classification and he looked like he was going to win – he was a real man. As France forgot about him, Bobet went home to lick his wounds and listen to words of advice from his father.”

Bobet’s initial Tour de France campaigns were overshadowed by such luminaries as Gino Bartali, Fausto Coppi and Hugo Koblet. Still, he succeeded in capturing the maillot jaune (yellow jersey) for a brief period during the 1948 race.

Two years later, he finished third on the podium, while also winning the Mountains Classification that year as well.

Bobet won his first Tour de France in 1953, dominating the mountain stages of the 50th edition of the French Grand Tour.

However, critics were quick to diminish his feat, pointing out a void in the competition, with rivals such as Koblet, Coppi and Ferdinand “Ferdi” Kübler conspicuously absent.

The 1954 race was different though, despite not having any Italian favorites competing there was a strong contingent from Belgium that year.

The race started out fast and didn’t ease up, with Bobet taking the lead after just four days – before losing it on day eight.

From there, the jersey changed hands a few times until Bobet regained it with a dominant performance in the mountains, particularly on the climb of the Col du Izoard.

Winning the time-trial event further cemented his lead, later arriving at the finish in Paris a staggering 15 minutes ahead of Kübler.

A few weeks later he won the World Champion Road Race in Germany.

Bobet left Stella after eight years to ride for Mercier, where the team rode bikes bearing his name, yet they were actually made by Mercier in their factory in St-Étienne.

Bobet completed a hat-trick of successive wins in 1955, winning the Tour of Flanders and the Critérium du Dauphiné Libéré before claiming that year’s Tour.

Rolland however, grew weaker as the race approached the Pyrenees, paving the way for Bobet to take over leadership of the team.

Despite suffering a sever “saddle sore” that later required surgery, Bobet went on to win the Tour.

In the aftermath, the media reported, “his flesh was full of holes.” “Dead tissue had to be removed to within several millimeters of vital organs. Nobody dared speak the word cancer.”

Bobet believed his suffering during that year’s Tour had lasting negative effects on his health and ability to perform on the same level for the rest of his career.

“He has 400,000 kilometers in his legs. He has conquered glory and fortune but he is badly ill. Despite the formal advice of his doctor, he has decided to ride the 1958 Tour de France. He will suffer. He knows that. In the heart of the gigantic rocks of the Cassé Déserte, Bob is arced on his bicycle, his kidneys crushed by the effort and his head, like a heavy, painful balance, oscillates above his handlebars. The sun beats down on him. Around him, the whole mountain smokes like a giant witch’s cauldron. As he breathes, what burns his throat and his lungs is the dust that rises around him… Abandoned, alone, without help, streaming with sweat, he has no other weapon against his adversaries but the mountain, the bad weather and his crazy willpower.”

Off the bike, Bobet liked to portray himself in the manner of a Hollywood matinée idol, which brought him much ribbing from other French riders.

Géminiani once said, Bobet’s mannerisms actually made him less popular even in his own Brittany. In addition, the British professional Brian Robinson called Bobet “a private man and a little moody” and said he would sulk if things went wrong, while the French journalist René de Latour described him as, “he didn’t look good on a bike” and that he had “the legs of a football [soccer] player”.

Bobet was equally fastidious about his attire, and was once rumored to have rejected his first yellow jersey because it had not been made with pure wool, which he believed was unhealthy to wear.

Bobet was also one of the first riders to employ a personal soigneur, a physiotherapist named Raymond Le Bert, taking his lead from Coppi.

Some of Le Bert’s unorthodox practices included booking Bobet a hotel room between half-stages, which was against the Tour’s rules. Riders were supposed to use a dormitory provided for them.

In addition, when the Tour insisted riders carry spare tires, usually round their shoulders, Le Bert gave Bobet tubulars with the inner tubes removed, which were useless to ride on but lighter to carry.

Bobet was said to be a great admirer of Coppi’s, particularly for his “modern techniques” and his refusal to have anything to do with performance-enhancing drugs.

One table attracted particular attention. Around it were Jaques Anquetil, Eddy Merckx and Bobet, 13 victories in the Tour between them. The conversation at the table was particularly lively and Louison Bobet was being challenged for saying that he had never taken the slightest drug or stimulant. He was obliged to admit that he had drunk the small bottles prepared for him by his soigneur at the time without knowing exactly what they contained. Which produced laughter from Anquetil and Merckx.

Bobet’s career effectively came to an end following a car crash that occurred outside of Paris in 1960, while traveling as a passenger in a vehicle that was being driven by his brother.

Following his retirement, Bobet had a succession of businesses, including a clothing store.

But, he became best known for developing the saltwater health treatment of Thalassotherapy, later opening the Louison Bobet Centre near the sea at Port du Crouesty at Quiberon.

In stark contrast to embracing a lifestyle of “wellness” and “healthy pursuits” however, Bobet fell ill over of the years, and later died of cancer the day after his 58th birthday.

Bobet is interred in the cemetery of Saint-Méen-le-Grand, where a museum was established in his memory.