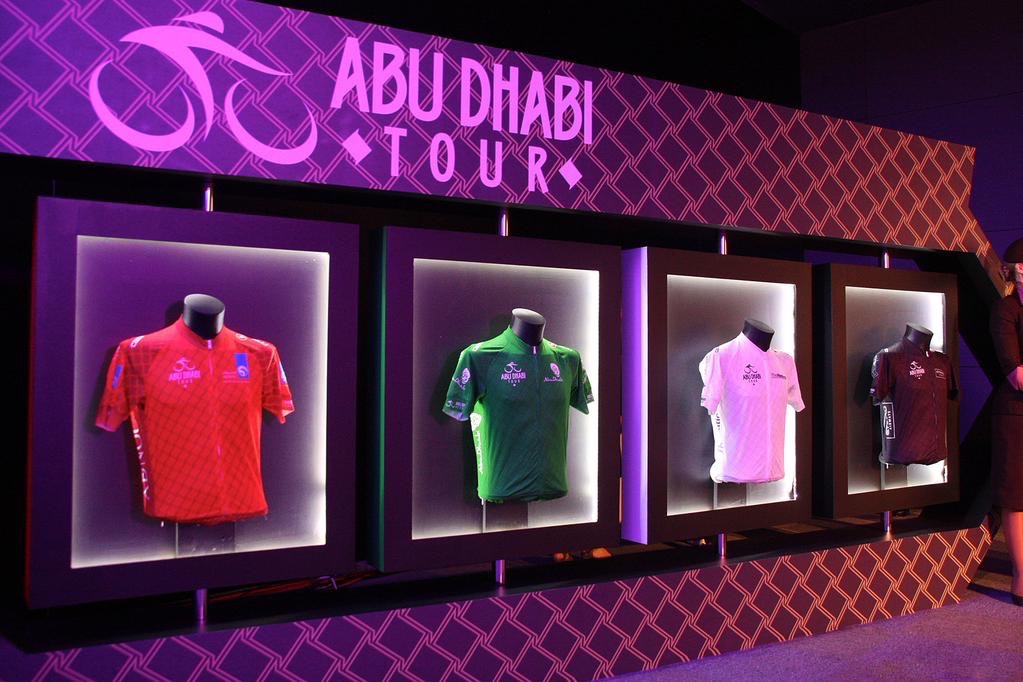 16 Sep 2015
By Campionissimo - In LATEST ARTICLES, THE GREAT RACE

Red, green, white and black: in October, the best riders will wear the United Arab Emirates (UAE) national colors as leaders of the four race classifications

Yesterday, in the magnificent setting of Yas Marina Centre, UAE Etixx–Quick-Step rider and Abu Dhabi Tour Ambassador Mark Cavendish, unveiled the four different jerseys that will debut on 8th October on the podium of Madinat Zayed, after the finish of Stage 1 of the brand new cycling tour.

As part of the ground breaking deal between the Velon group of WorldTour teams and Abu Dhabi Sports Council (ADSC) announced on 8th September, Velon and ADSC are working together with marketing and technology support to enhance and promote the race and its #RideToAbuDhabi campaign.

“I’m honored to be here today in the role of Official Ambassador” said Mark Cavendish. “This is an important step on the road to the debut Abu Dhabi Tour. Jerseys are the symbols of our sport: the colors and meanings behind them are very important. I definitely like these colors and the Abu Dhabi Sports Council’s choice. I will be focused more on red and green but I am very curious of black, an unusual color in the international cycling circuit. I hope to reach the podium after the first stage in Madinat Zayed.”

Velon CEO Graham Bartlett said: “The Abu Dhabi Tour has big plans and Velon’s teams and riders are committed to supporting them. As part of our partnership, we have guaranteed that some of the WorldTour’s greatest teams and racers will be competing at Abu Dhabi to capture the Official Jerseys, are working in cooperation with ADSC to promote the Abu Dhabi Tour and bring the fans the sure-to-be dramatic racing that lies ahead.”

The jerseys are designed and made by the Castelli with a close-to-the-body anatomical shape for maximum aerodynamic performance.

“Bikes and jerseys are an inseparable couple. And cycling fans know how important the jersey’s reputation is for the success of a stage tour. Ours is a choice of identity: red, green, white and black, representing the UAE’s unity and it is important to carry on this context through sport,” said Mr. Aref Hamad Al Awani, General Secretary of the Abu Dhabi Sports Council. “I pause a moment on the Leader jersey: not everybody knows that red is the dominant colour of the Abu Dhabi traditional flag. In this manner we want to symbolize all our history while we are on the world stage.”