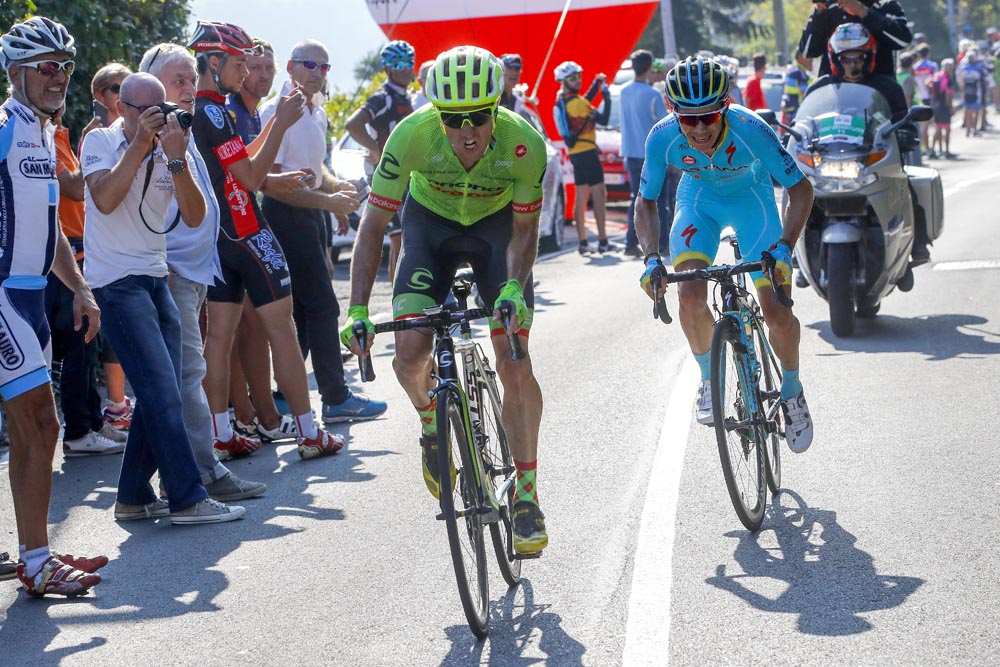 Miguel Angel Lopez (Astana) won this year’s edition of Milano-Torino today, after commencing a powerful attack part-way up the final ascent of Superego, that saw the young Colombian rider catch a surprising number of his rivals off-guard – with Michael Woods (Cannondale-Drapac) as the only rider who was able to respond.

However, the Cannondale-Drapac rider proved no-match for the Astana rider, as both men proceeded to attack one another during the final steep sections of five-kilometer climb to the Basilica at Superga above the city of Torino, with Lopez ultimately proving to be the strongest of the duo.

Meanwhile, Woods’ teammate, Rigoberto Uran, crossed the finish five seconds behind him, to claim the final spot on the podium.

“Thanks to the team I achieved this magnificent victory here today despite the loss of Michele Scarponi who crashed – I dedicate this achievement to him,” Lopez said.

“Diego Rosa, who was also involved in the crash, did a tremendous job for me as well as Dario Cataldo in bringing back the breakaway. We always speak during the race, that enabled us to change tactic on the way… It was smart to try to go away before the final ascent. I didn’t expect to win today. It’s beautiful.”

However, back in the main field, teams such as Tinkoff, AG2R La Mondiale, Trek-Segafredo, Bardiani CSF and Cannondale-Drapac began amassing a concerted chase effort.

At one point, Kennaugh decided to attack his breakaway companions along the first trip up to Superga, quickly building up a slight lead over Grosu and De Marchi.

Meanwhile, Trek-Segafredo led what was left of the peloton over the final sections of the climb, with Eduardo Zardini (Bardiani CSF) later attacking and subsequently catching and passing De Marchi and Grosu.

In the meantime, Kennaugh continued to make his way over the climb, while Zardini and the chase managed to reduce his lead to just 30 seconds.

From there, Kennaugh took some risks along the tricky descent. But, the Sky rider was eventually reined in at the bottom of the climb with 10 kilometers to go.

AG2R La Mondiale was the first team to attack at the base of the final climb, forcing a group of 11 riders to go clear.

Woods was the first rider in the group to make a bid along the steep slopes to Superga, but his move was soon joined by Lopez.

There was a brief partnership between the two riders, but all bets were off when Lopez attacked during the final kilometer.

At one point, Bardet rode clear of the chase group in pursuit of the two leaders, but to no avail.

Back up front, Lopez attacked Woods again during last kilometer, but the Cannondale rider managed to hang on to execute a final attack of his own during the closing 700 meters.

However, Woods’ move proved futile, as he was unable to rid himself of Lopez, who in turn launched a final attack that proved to be unassailable for this rival.