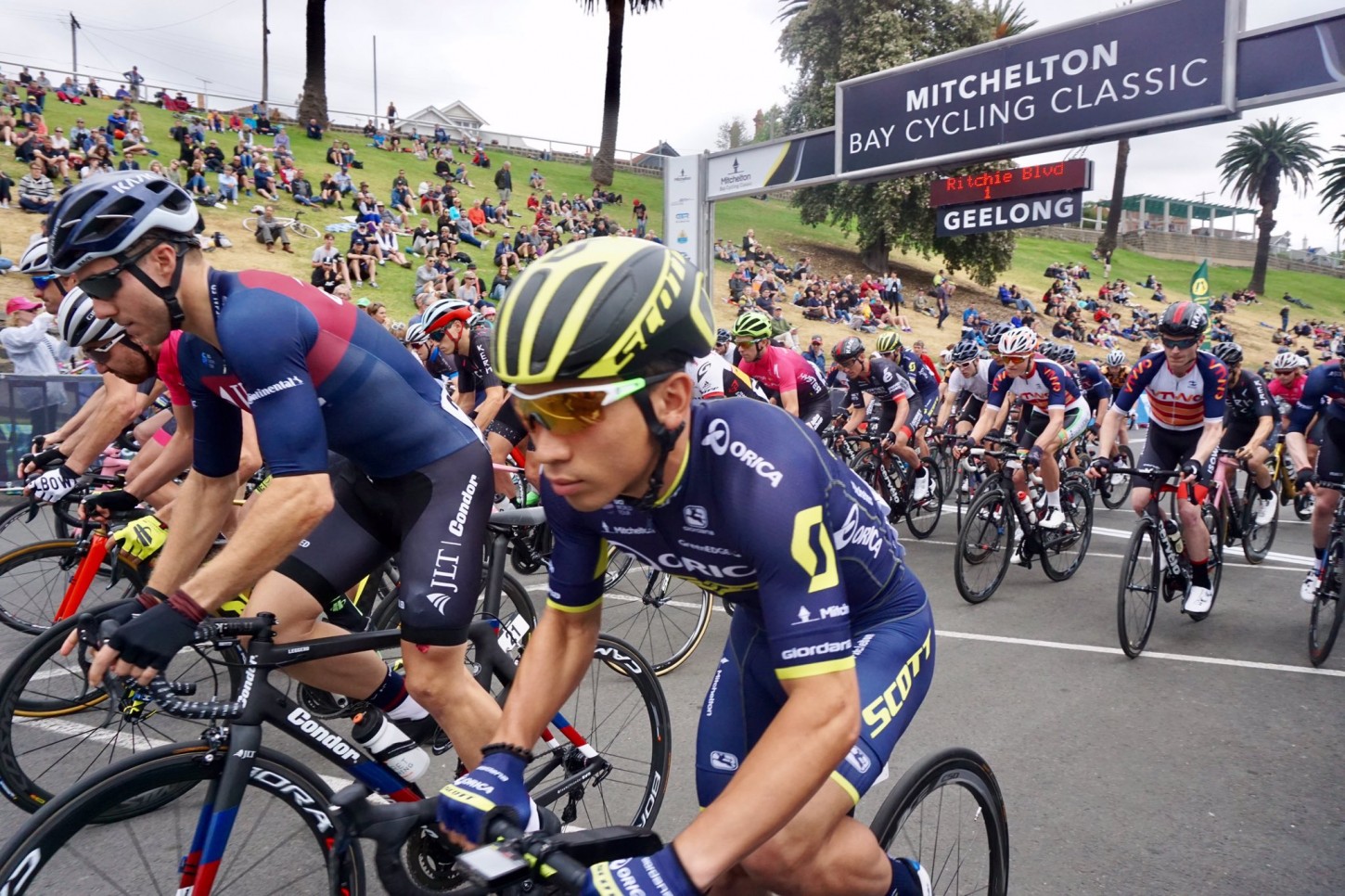 JTL Condor’s Ian Bibby claimed the opening stage of this year’s Mitchelton Bay Cycling Classic, after the British rider managed to avoid a crash in the final corner to edge out Jesse Kerrison (IsoWhey Sports SwissWellness) and teammate Mathew Gibson to seize the stage honors.

Meanwhile, three-time winner and race hopeful, Caleb Ewan, was amongst the causalities, causing the young Australian rider to miss out on the stage victory.

We were racing for Breton Jones,” said Bibby. “I did a good turn, got into position and sort of sat up and there were only five or six [riders] left, so I thought I should just carry on.”

“They all went really hot around the corner and then they all went down, so I put my chin down,” Bibby added. “It’s a shame, the crash, but I suppose that’s bike racing.”

Cameron Bayly (IsoWhy Sports Swiss Wellness) attacked 25 minutes into the hour-long race, while ORICA-Scott led the chase which ultimately reeled Bayly back in just ahead of the finale.

“The race went pretty flat out really for those last few laps,” noted Bibby. “I caught up on the last bend with a lap to go. I had Ed [Clancy] and Brenton on my wheel. I rolled them back and swung over and there were only six or seven left.”

Ewan attacked on the back straight of the circuit, carrying his speed into the final corner with 190 meters left to go, while other race favorites such as Scott Sunderland (IsoWhey Sports-SwissWellness) followed in his slip-steam just before the crash.

From there, Bibby emerged from the final corner with only a couple of riders around him, subsequently holding off Kerrison and his teammate to take an unlikely victory.

“Going into the corner I was maybe fourth or fifth,” Bibby said. “There were a couple lads on the straight behind me still, and I thought I’d keep going and get a top five if possible.

“Caleb hit out,” Bibby explained. “All I saw was four of them sort of going down the line flat out. Someone must have gone down, caught wheels. I tried to dodge them as best I could.”

“I came around, and me another lad came out together,” Bibby added. “It was a drag sprint up and luckily I got the better of him.”

Only 18 of the 48 starters in Geelong finished today, with a battered Ewan eventually crossing the finish in 17th place, some 50 seconds down on Bibby.

“I’m not exactly sure what happened,” said Ewan. “I have hit that corner so many times in exactly the same way, if not faster, and I haven’t had an issue. There’s no major damage, just a bit of skin. There are more days to come, so we will keep trying.”

“First of January. First win. Hopefully it will be a good year,” Scandolara said. “It was a pretty hard race but with an amazing team like Alé today, it was less difficult. ORICA did a really hard race, attacking at every moment. I had to make sure to jump on them as soon as possible.”

After a flurry of attacks from the big teams in the early stages, the race’s first decisive move came roughly two-thirds of the way through its 45 minutes. Orica-Scott pair Annemiek van Vleuten and Jess Allen got clear with Scandolara for company before a strong chase group of four came across: Peta Mullens (Hagens Berman – Supermint), Chloe Hosking (Ale), Sarah Roy and Amanda Spratt (both Orica-Scott).

Orica-Scott had four of the seven riders in the lead group and it was no surprise when Spratt soon attacked. She had Hosking for company — a promising move — but the pair were soon caught.

An attack with less than 10 minutes to go saw Allen, Shannon Malseed (Holden Women’s Cycling) and Scandolara get clear of the field. The trio would go on to maintain their gap through to the end with Scandolara taking a comfortable win, followed by Malseed and then Allen.

Staying up the road and controlling the pace was Ale Cycling’s goal from the outset of today’s race.

“It was just a matter of making sure we were in the breakaway and me or Chloe [Hosking] or the other strong girls had to make sure to be there,” Scandolara said. “In the last corner I made sure I took it first so then I could manage my sprint and do what I wanted.