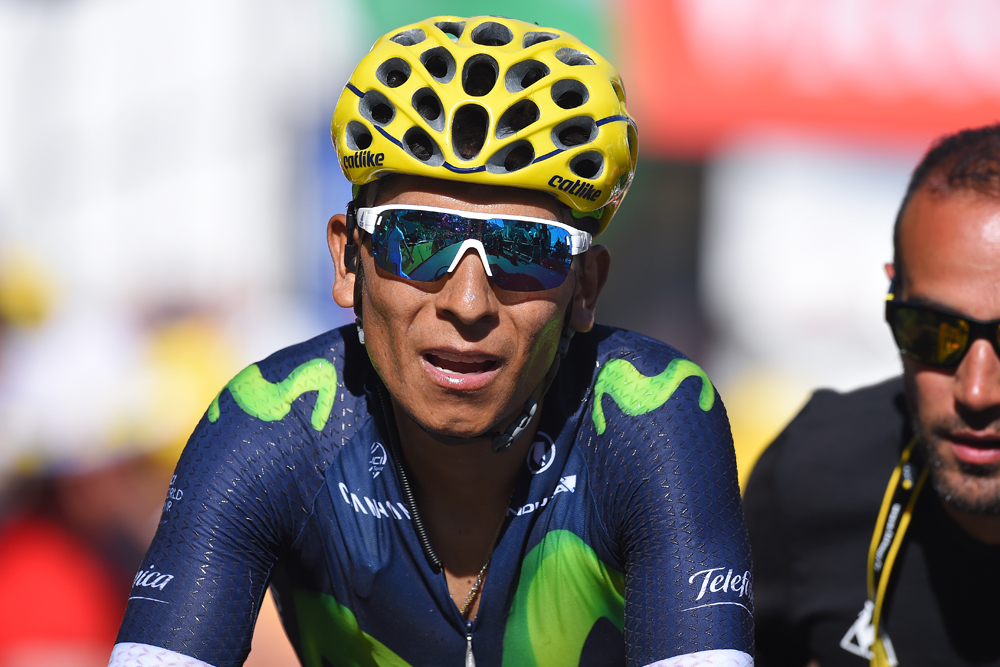 The latest rider to speak out against the reintroduction of disc brakes in the pro peloton is Nairo Quintina – calling them “heavier, less aero and dangerous”.

Indeed, the Colombian rider told an audience of journalists during the final stage of the Abu Dhabi Tour on Sunday, that he asked to have the disc brakes removed from his bike following the accident which occurred during the opening stage that allegedly left Team Sky’s Owain Doull with a sliced cycling shoe and cut foot.

“Our bike brand [Canyon –ed] has disc bikes available but in my opinion we shouldn’t be using disc brakes,” said Quintana.

“Firstly because they don’t actually brake all that well. You hear other riders’ bikes in the peloton when the brake rubs up against the rotor. That’s one thing. Secondly, it makes the bike less aerodynamic. Thirdly, they’re much heavier.”

“Lastly, there’s the danger they pose in a peloton of more than 100 riders. They are good for a touring cyclist, or a person who goes out riding with two or three others and is more careful, but racing is another matter.”

“There is no problem with the brakes that we currently have – they work very well. No one has ever had any sort of complaint,” he argued. “They’re lighter, and you have a much better feel.”

Disc brakes have been attributed for causing two serious injuries since cycling’s governing body allowed them to be introduced in 2016.

Fran Ventoso is believed to have suffered a serious gash to his leg last April, followed by Doull’s accident last week – though skeptics cast doubt on the claims that disc brakes were responsible.

The UCI halted its original trial after the Ventoso incident and commenced the re-trial at the start of this season with rounded rotors, though the riders’ union, the CPA, has recently pushed the UCI to ban them once again until further safety measures are introduced.

CPA representative Adan Hansen told the media on the morning after the Doull incident, that “it might take a bullet for change to happen”.

Quintana reiterated his concerns yesterday, saying, ‘until something tragic happens, up to someone even losing their life, they’re not going to see sense – the UCI as well the manufacturers.”