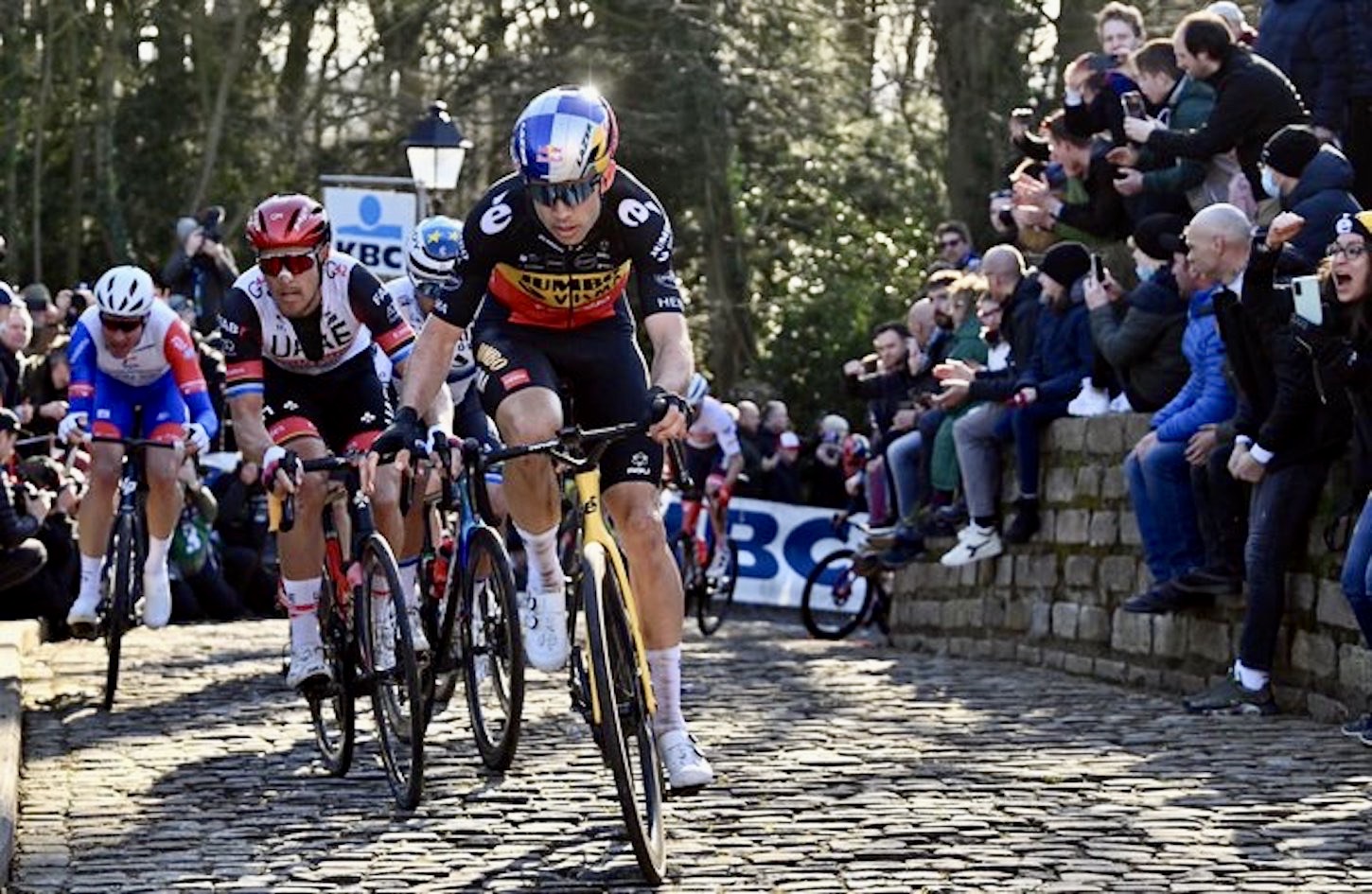 Wout van Aert (Jumbo-Visma) opened his Spring Classics account with a victory in today’s Omloop Het Nieuwsblad, after the Belgian rider launched a long-range attack with 13 kilometers remaining that no one could counter.

Meanwhile, Sonny Colbrelli (Bahrain-Victorious) won the sprint for second-place from a group of about 20 riders, with Greg Van Avermaet (Ag2r Citroen) finishing roundsman gout the podium  in third.

Van Aert made his winning move along the final ascent of the Bosberg, cresting climb with lead of about 10 seconds that continued to increase until the line, finishing 22-seconds ahead of his closest rival.

After about 70 kilometers of racing, the original breakaway group had fractured into several smaller groups, with the remaining stragglers being caught up the chase with 45 kilometers to go, forming a new lead group of nine riders.

An acceleration from Tiesj Benoot later saw himself and teammate Wout van Aero go clear, taking the Ineos Grenadiers duo of Tom Pidcock and Jhonatan Narvaez with them.

They were later joined by Colbrelli, and together, with 26 kilometers still to ride, these five riders caught the six riders that remained ahead of them – Kung, Vermeersch, Vliegen, Healy, Hollmann and Hulgaard.

With the crucial Muur-Kapelmuur approaching, Benoot attacked at the front of the race 20 kilometers from the finish, shattering the cohesion of a group that were reluctant to give Benoot’s teammate Van Aert a free ride.

They were promptly caught at the foot of the Muur, leaving just Benoot out in front with a lead of just under 30 seconds with what was a very large peloton in pursuit.

Benoot saw his lead evaporate on the climb, as Matej Mohoric (Bahrain Victorious) led the peloton over the top with many of those from the previous breakaway, including Van Aert, Trentin and Colbrelli, nearby.

Benoot was caught on the descent after, where the race came back together with over 20 riders still together.

Attacks in these circumstances were inevitable, with Oliver Naesen (Ag2r Citroen) among those to have a go.

But the big move happened just prior to the Bosberg, 13 kilometers from the finish, when race favorite Van Aert accelerated.

Van Aert extended his lead on the Bosberg to about ten seconds, and by now was fully committed. But despite his strength, he still had a big task on his hand holding off what was a very strong, and still very big (approximately 20 riders), group.

Despite the best efforts of the chasing group, who worked together relatively cohesively, Van Aert’s lead grew, and with 7km had reached 20 seconds.

Bahrain-Victorious’ Mohoric and Colbrelli and Groupama-FDJ were doing the lion’s share of the chasing, and so some of the impetus went out when Kung had a flat tire.

A smile on the Belgian rider’s illustrated just how deep he was going, and by the time his advantage was up to 30 seconds with just a few kilometers to ride, victory was inevitable.