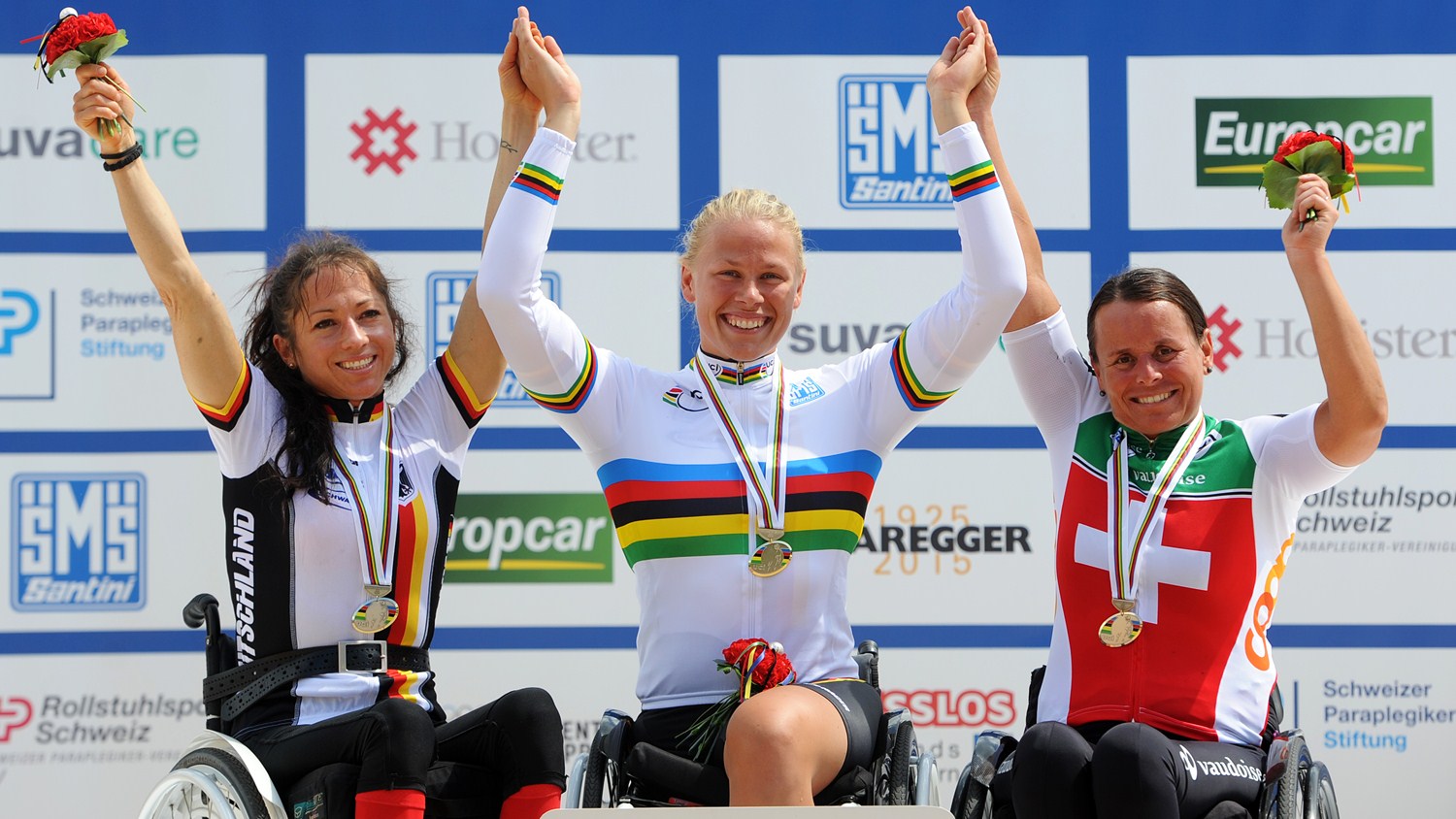 Thirteen mountain passes and 14,000 meters of climbing… para-cyclist Silke Pan has set herself no easy task for the summer. But more than a pure sporting challenge, her project is also a journey of discovery that she plans to share via a documentary film and a book.

“I want to present these mountains from a different angle,” explains the former circus artist, paraplegic since an accident in 2007. “At the top of each pass, I am organising a meeting in relation with that particular summit.”

After four years of international hand-cycling competition, including a silver medal at last year’s UCI Para-cycling Road World Championships,  Pan has decided to take a different direction with her beloved sport.

“I want to set up my own projects, while continuing the sport I love and pushing my limits. I’ve been thinking about this project for quite a while.”

Silke and her handbike have already conquered two of the mountains on her list for the coming months.

At the top of the Col du Simplon, she met with the canon from the Hospice de Simplon, who treated her to a guided tour of the premises, filled her in on its history and recounted numerous interesting anecdotes.

Her military-style welcome atop the Col des Mosses was completely different: a Swiss Army battalion accompanied her the last few meters of the Hongrin military road to the firing range.

“It was very impressive to be greeted by these armed, camouflaged men. They were all very serious, and I was at a loss for words when I first arrived.”

The remaining eleven ascensions planned for this summer will take place mainly in July and August and lead her to meetings with, among others, Olympic judoka Sergei Aschwanden, an eminent alpinist, a paraglider, a crystal hunter…

Pan has already started documenting her voyage for the book that she is co-writing with her partner and cycling companion Didier Dvorak.

“I’m writing a book that is both sporting and cultural, showing the beauty of the Swiss Alps but also something more intimate from each pass that people aren’t necessarily familiar with. I am meeting some exceptional people in a magnificent context.“

“These are encounters that will always remain with me and which I want to share.”

Swiss journalist and television presenter Jean-Philippe Rapp will write the foreword for her book, while adventurer and writer Claude Marthaler will pen the introduction. Meanwhile a film crew is following her progress with a view to producing a documentary.

A motivational speaker, Pan will also address conferences to talk about her ascensions, her inner strength and her thirst for and love of life.

Listen to Pan for any length of time and her enthusiasm creeps up on you and envelops you. Her energy overflows and is channelled into more than this one project.

The Haute Ecole de Santé Vaud (tertiary health education institution) has asked her to be part of a team for the 2017 Race Across America (4900km cycling in nine days) as both participant and mental coach.

She is also helping the HEPIA (Haute Ecole du Paysage, d’Ingénierie et d’Architecture) and the company Biomobile on a project to produce a “green” handbike.

“I have still more projects in my head for 2018 and beyond,” says the tireless Pan, who also runs a balloon decoration company with Didier Dvorak.

More information about her current project “La Suisse au bout de bras” (Switzerland at my fingertips) can be found on the website I believe in you.