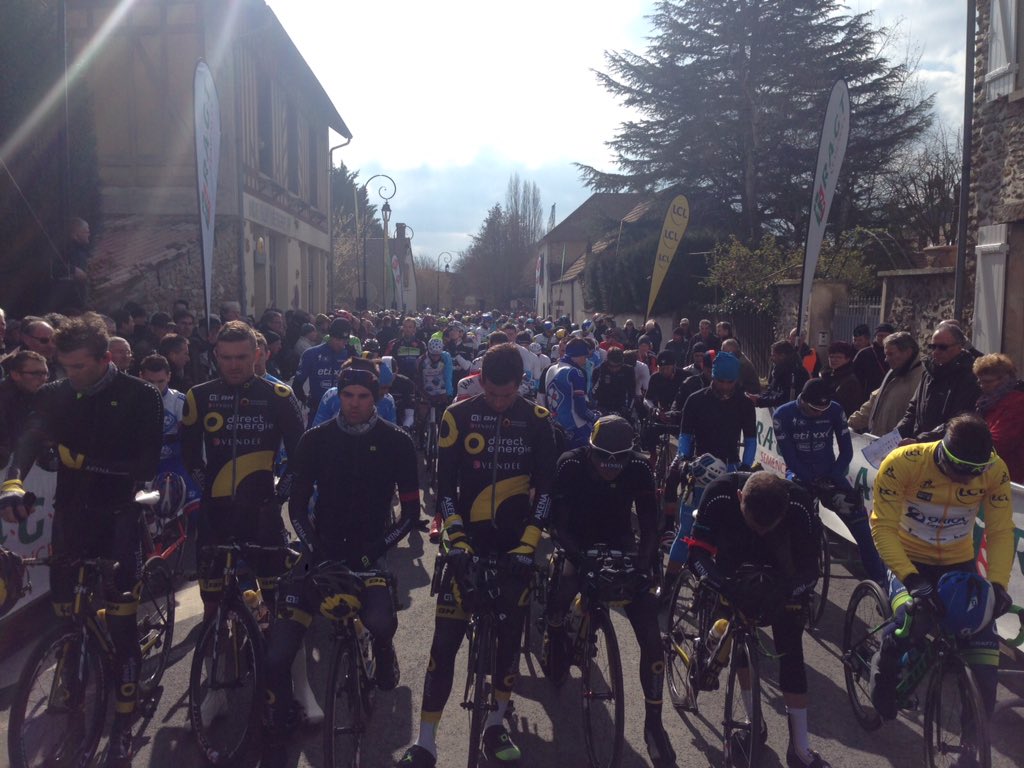 Arnaud Demare (FDJ) brought his winless streak to a close today, after claiming stage 1 of Paris – Nice, in a sprint finish ahead of Ben Swift (Sky) and Nacer Bouhanni (Cofidis), marking his first major victory since winning the French champion title two years ago.

Meanwhile, Michael Matthews (Orica Greenegde) kept a close watch on his main GC rivals to retain his leader’s yellow jersey, while even collecting a few seconds in the last intermediate sprint of the day.

Today’s stage began with a moment of silence, to observe the death of the French rider, Romain Guyot, who was recently killed in a training accident.

From there, the escapees would go on to establish a maximum advantage of 9:30 over the peloton – after 70 kilometers of racing.

De Gendt would claim the first intermediate sprint of the day in Bonneval (km 104), while the peloton continued to chip away at the breakaway group’s lead.

The escapees were eventually reclaimed by the peloton along the gravel sector of Chemin de Tourmaline during the final 20 kilometers, with De Gendt being the last hold-out.

Heading into the gravel sector of Chemin du Tertre de la Motte, Pierre-Luc Perichon (Fortuneo) decided to initiate an attack, subsequently picking up the mountain points, as well as the intermediate sprint in Vendome.

Back in the peloton, Michael Matthews outsprinted Geraint Thomas (Sky) to add two seconds to his overall tally, after winning the intermediate sprint.

However, as the race entered the final kilometer, Edward Theuns (Trek) decided to attack, only to have the curtains brought down on his efforts during the closing 400 meters.

From there, Ben Swift (Sky) initiated an attack, while Bouhanni and Demare closely marked his move.

In the end, it would be a final surge by Demare that would earn the French rider the stage victory.