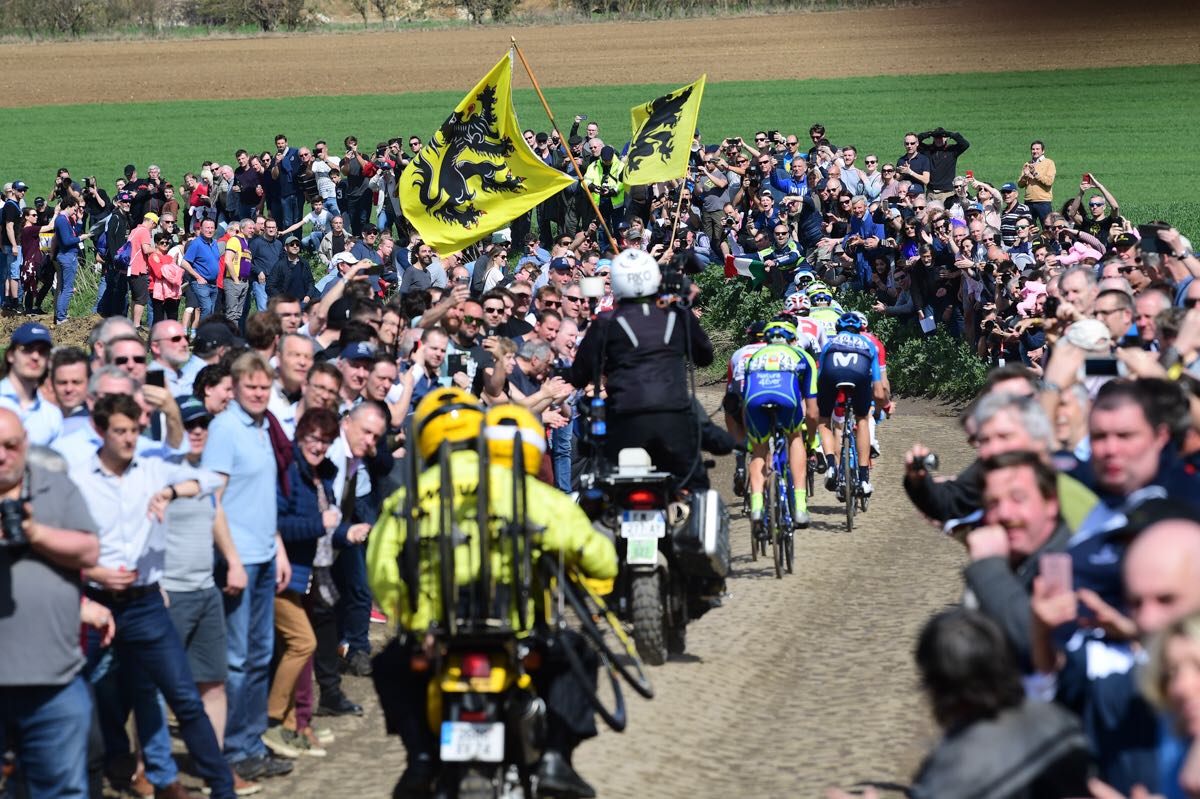 Peter Sagan (Bora-Hansgrohe) became the first reigning world champion to win Paris-Roubaix since Bernard Hinault in 1981, after the Slovakian rider won a two-man sprint on the velodrome against Swiss national champion Silvan Dillier of AG2R-La Mondiale.

Meanwhile, Niki Terpstra rounded out the podium for Quick-Step Floors, marking but another top finish for the Belgian squad in their Spring Classics campaign.

The deficit of the bunch was seven minutes when they hit the first cobbled section at Troisvilles (km 93.5) after the nine leaders got a maximum advantage of 8.50. A crash split the peloton in three parts with defending champion Greg Van Avermaet (BMC Racing Team) being caught in the last part. He lost team-mate Stefan Küng in one of the first crashes of the day. Despite several hiccups affecting Arnaud Démare (Groupama-FDJ), Oliver Naesen (AG2R-La Mondiale) and Alexander Kristoff (UAE Emirates), all the favourites were back in the main pack mostly led by Quick Step Floors towards the Arenberg trench where the advantage of the breakaway group was down to 2.15. At the exit of the trench, the front group was split in two with Dillier, Bystrom, Wallays, Robeet and Soler at the front while Mike Teunissen (Sunweb) and Philippe Gilbert (Quick Step Floors) rode away from the peloton before being reinforced by Nils Politt (Katusha-Alpecin).

With 75km to go, all the favourites were reunited with a deficit of one minute from the five remaining leading riders. Zdenek Stybar (Quick Step Floors) relayed Gilbert on the offensive in between the five leading riders and the peloton. Stybar caught Soler who couldn’t hold the pace of his former breakaway companions. As he also caught Robeet, he gave up the chase with 60km to go. Van Avermaet launched the battle of the giants with 55km to go. Peter Sagan (Bora-Hansgrohe) countered and rode away solo. Sagan hit the front of the race with 51km to go. 40km before the end, Sagan, Dillier and Wallays had 35 seconds lead over a small group led by Niki Terpstra (Quick Step Floors) and eventually formed of Jasper Stuyven (Trek-Segafredo), Sep Vanmarcke and Taylor Phinney (EF), Wout Van Aert (Willems-Crelan), Jens Debusschere (Lotto-Soudal) and Van Avermaet

With 25km to go, the leading trio had an advantage of 45 seconds. It went up to 1.25 as Wallays lost contact and left the lone Dillier as an early breakaway member along with Sagan at the front. Sagan tried to go solo on the cobblestone sections of Carrefour de l’Arbre and Hem but the Swiss champion stayed with him. The duo was never threatened by the chasing group from which Terpstra exited to round out the podium behind Sagan who was logically faster than Dillier in the sprint on the velodrome of Roubaix.