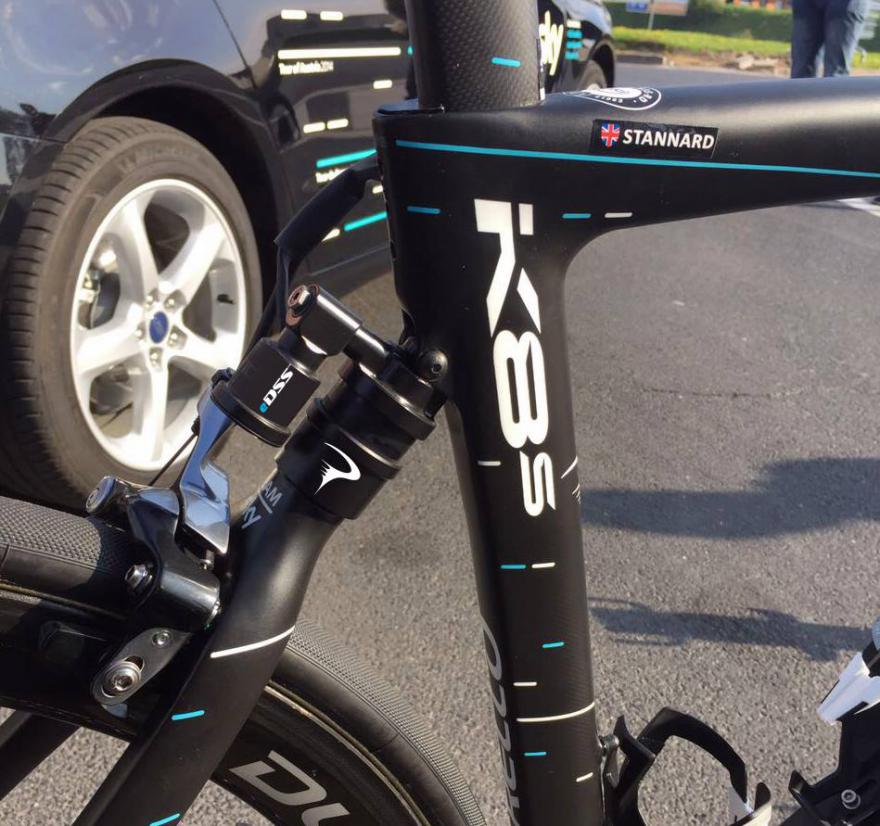 Apparently the “pogo stick” version of the Dogma K8-S, which unofficially failed during the Paris-Roubaix classic a couple of years ago, hasn’t prevented Pinarello from further experimenting with quack science, as the Italian brand has once again seen fit to equip Team Sky’s latest version of the Dogma K8 with some newfangled adjustable suspension gubbins ahead of this weekend’s cobbled classic.

Putting prejudice aside, Pinarello partnered with the suspension company, HiRide, to develop the new system, which is claimed to feature  automatic suspension dampening and lock-out.

Formally called, the eDSS 2.0 (Electronic Dogma Suspension System), the system relies upon six axis accelerometers and gyroscopes to read feedback from the road, and just the amount of dampening accordingly. Furthermore, Pinarello says it can adapt the suspension to suit all types of road surfaces and terrain in milliseconds.

Whether or not this new system ultimately proves to be effective, remains to be seen.

However, if it performs anything like the previous gimmick, and that’s really what it turned out to be, it will likely join similar failed contraptions like the RockShox Roubaix and the Specialized Zerts in the dung heap of bicycle tech.

Still, Pinarello seems pretty enthusiast about its new development. To wit,“I am very happy with this new and ambitious project that PinarelloLab developed with the collaboration of HiRide. The introduction of an electro-hydraulic control system establishes an important step forward in the technological evolution of our bikes, improving performance and increasing safety,” commented Fausto Pinarello.

Carsten Jeppesen, Team Sky head of operations added, “the eDDS2.0 is a fantastic innovation on our bikes, gives to our riders the best of both worlds: stiffness on normal road and comfort on the cobbles.”

Our thoughts, listen for the word of Colonel Steve Austin as Team Sky makes their way down one of the first Murs during this weekend’s race.