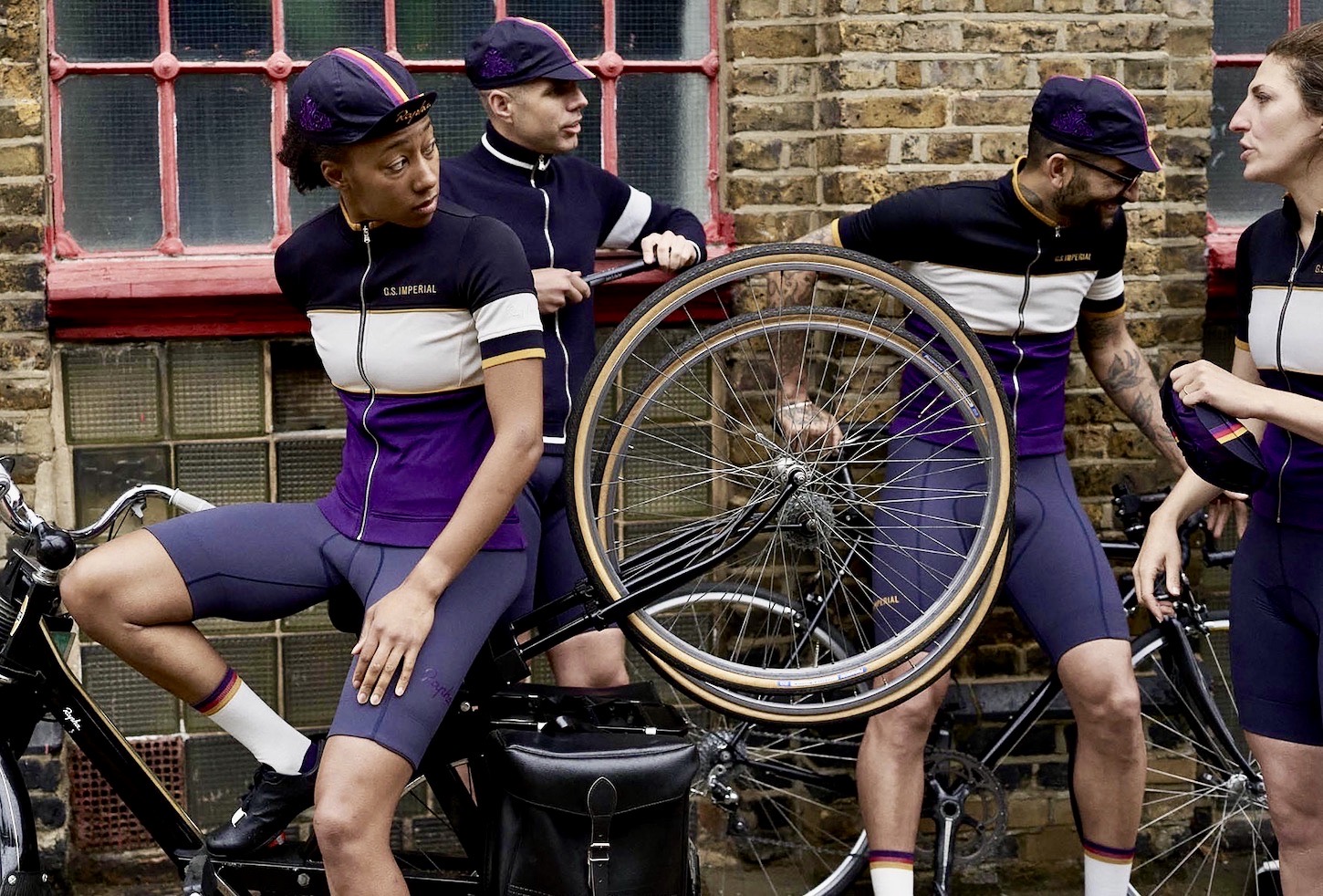 Rapha has launched a new collection of apparel for its Rapha Cycling Club members called Imperial Works, which celebrates the British brand’s earliest beginnings where it began in an old piano factory that once bore the same name.

“Long before the signature stripes of the RCC were to be seen in cities around the world, there was another club based in London but with an Italian soul.

“Imperial Works was an invitation-only members club whose luxurious livery was the envy of other cyclists,” Rapha says.

“The Tricolour Jersey features an adapted version of the club’s original colors with a contrast stripe across the chest and embroidered detailing throughout,” Rapha says.

It’s made with Rapha’s soft RPM150 blend with recycled fibers for a lower environmental impact, which features a quarter-length zipper and an embroidered treble clef on the pocket that gives a nod to Rapha’s original offices inside the old piano factory.

Made with the RPM150 blend, there are embroidered details throughout the jersey, including the signature armband, as well as a full-length Super Lampo zipper.

Rapha offers both a men’s and a women’s Imperial Works version of the Classic bibshort, which feature a multi-layer chamois made from quick-drying foam with an antibacterial finish on top, while the straps are made from a lightweight mesh for breathability with a central cut out on the back of the men’s for added ventilation.

The bibshorts are further highlighted by low-profile silicone leg grippers and reflective pipping on the side panels for improved visibility in low light conditions.

Made with a merino wool blend, Rapha says this base layer is versatile and comfortable, promising to keep you cool on scorching climbs and warm on the chilly descents.

“All the seams have flat-lock stitching to avoid chafing and are positioned behind the shoulders to avoid bag or bib straps rubbing while cycling,” Rapha adds.

“Based on the knitted track jackets often created for Italian cycling clubs, the Imperial Works Track Jacket is a made with a luxurious merino wool blend for complete comfort,” says Rapha.

Additionally, the jacket has a contrast lining for added insulation, along with two integrated hand pockets for keeping warm while on cooler outings.

The socks are based on Rapha’s Merino socks, making use of merino’s natural sweat-wicking properties for temperature regulation across a wide range of weather conditions.

The socks are also given a pre-wash treatment for reducing shrinkage.

The Imperial Works cap has embroidered detailing across the brim and sides, while a tri-color stripe accents the middle.

You can learn more about the new Imperial Works collection at Rapha.cc