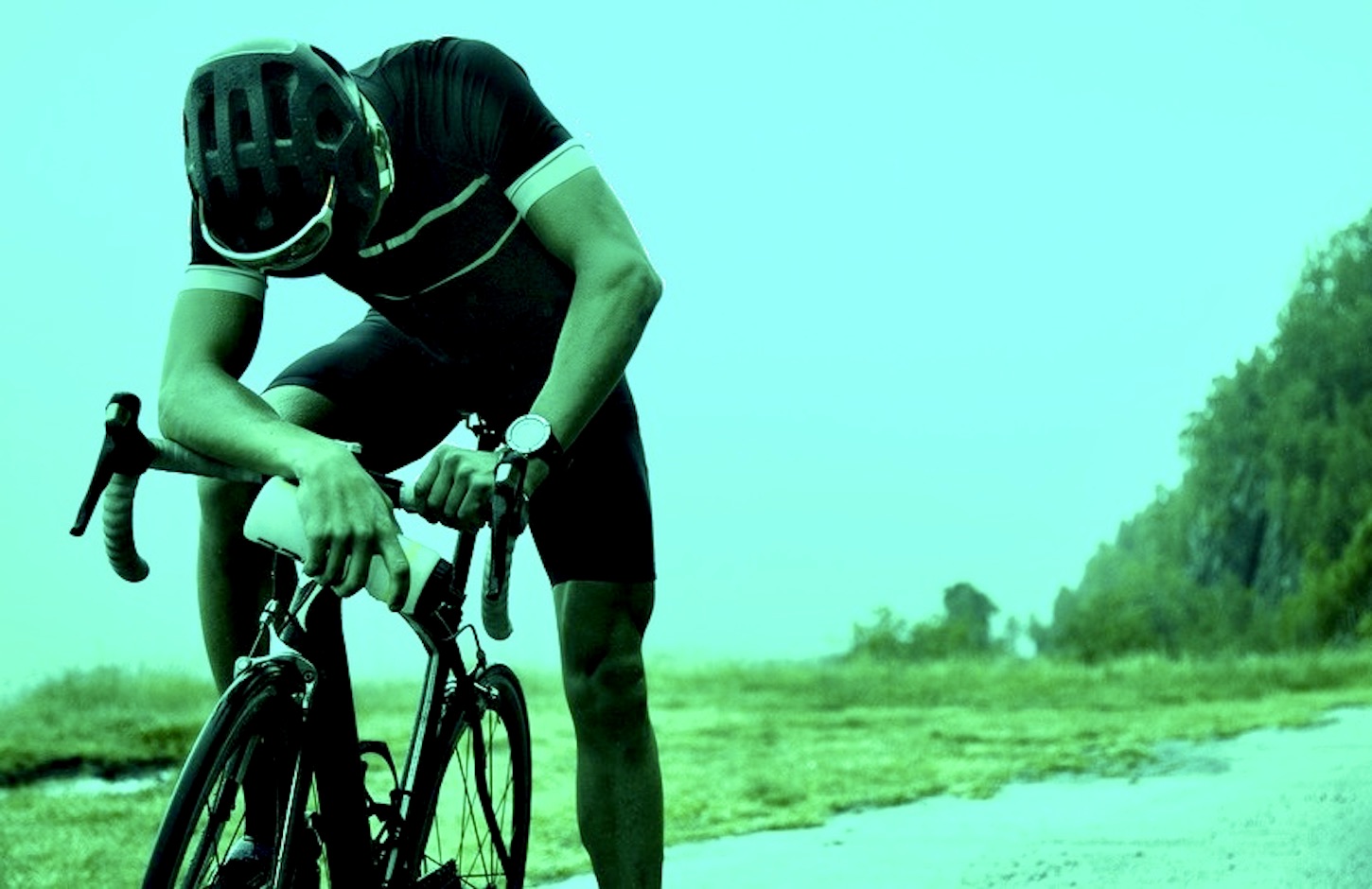 ………On the science of finding your absolute limit

article by Alex at FastFitness.Tips

The term “time-to-exhaustion” has been added to several training apps to mean the longest time you can ride at a specific power. For example, if you set your indoor smart trainer to 400watts in ERG mode, how long can you maintain that? However, this is not really true exhaustion, since you could continue at 300w or 200w even after reaching your limit at 400w. So today I will explore the limits of true exhaustion, and learn how to push yourself further than ever thought possible. The truth is, we almost always can go further than we think we can, and your brain will usually give up long before your muscles and cardiovascular system. Consider these superhuman efforts. In 1880 Michael Byrne bet he could run further than a horse in a week. After 578 miles he won! Or how about this more recent effort from 2020; Canadian Pro cyclist Travis Samuel rode 1008km in one 24hour world record stint on Zwift for the Crush Covid marathon Zwift fundraiser.

Let’s have a look at the mechanisms underlying fatigue and  exhaustion.

When you think of fatigue you probably think of your muscles. Fatigue can be defined as an inability to maintain a power output during repeated muscle contractions despite wanting to. However there  are two major components of fatigue: peripheral fatigue and central fatigue.

Peripheral fatigue is about the muscles’ ability to maintain desired force fuelled by oxygen and glycogen and fatty acids. This peripheral fatigue is more limiting in short duration, high intensity activity because it stems from a build-up of metabolic by-products, hydrogen ions (H+) and inorganic phosphate (Pi) (not lactate!). Central fatigue is a major factor during lower intensity, endurance activity and has to do with high level monitoring from the brain. Central fatigue is somewhat mysterious as this fatigue occurs when the brain *intentionally* reduces neural drive to the muscles through a reduction in motor unit recruitment and in motor unit firing rate. Researchers think that a “central governor” mechanism in the central nervous system functions to protect the body from damage. Indeed, Noakes said fatigue is more like an emotion rather than an actual physical event that can be manipulated

Evidence suggests that exercise intensity is regulated based on one’s perceived exertion in order to avoid the possibility of “critical” damage or fundamental disturbance in homeostasis. Basically your brain asks not just “can I continue?” but “will there likely be damage if I continue to the goal?” If there is not a reasonable chance of achieving the goal at the current pace without harm, your brain will tell your muscles to slow down. This can be written in a perceived hazard score:

Take the example heart rate. Heart rate is regulated by the autonomic nervous system controlled by the brain. If during exercise, your heart rate goes dangerously high your brain will try and slow you down. Not just slow your heart, but slow your muscles too. And more than this, if you heart rate is rising fast and your brain doesn’t think you can sustain that rate of increase before the goal is met, then your brain will try and slow you down as well!

This is one branch of a safety mechanisms called the central governor theory. And all evidence says it is more than a theory, it is a major determinant of your performance.

Originally proposed by Archibald Hill and then 70 years later by professor Tim Noakes, the thrust of the central governor theory is that the brain uses a mixture of conscious and sub-conscious (physiological) cues to control the muscles and hold them back from reaching their actual limit. Physiological factors (such as the level of muscle glycogen, lactate etc) are not the main determinants of fatigue, but just signals that the brain takes into account along with other information. Your brain is constantly monitoring the situation and when it decides your effort exceeds your ambition, it creates the distressing sensations you then interpret as fatigue.

Now here is the interesting bit. If the  brain moderates your effort based on the *perceived conditions* such as the time left in the event, or the likelihood of success….. can the system be fooled into giving you a bit more? To answer this we have to look at feedback or deception studies.

As long ago as 1968, Boston Marathon champion Amby Burfoot described a “deception” workout where the coach makes you tackle an extra lap or extra repetition after you think you’re finished from pretending to miscount. “From this workout,” he wrote, “you’ll learn forever that you’re capable of much more than you think. It’s the most powerful lesson in running.”

Now fast forward to 2011 Kevin Thompson, head of sport and exercise science at Northumbrian University, did the same thing in an innovative study. He asked athletes to cycle against an on screen avatar which he told them was their PR/PB time. But he cheated! The avatar was programmed to go 1% faster (with 2% more power) than their recent their PR/PB time! The surprise was 8 of 9 athletes improved their times (link) which they could not do simply by offering them money to beat their time! This was replicated by Ansdell (2018) and I have drawn it out here.

Notice the athletes who were cheated, did better right until the end, when I guess their additional effort caught up with them but by this time they were well ahead! Since then multiple studies have found the same .

In their meta-analysis, Davies et al. explored the effects of environmental feedback interventions on pacing. In line with the above studies, 26 cycling studies demonstrated environmental effects of hypoxia, thermal aspects and feedback on pacing and performance.

However, there is another factor that these deception studies did not consider. The effect of racing someone else. Corbett (2012) studied this in 14 cyclists doing a 2000m TT. Power output) improved and times were improved by 2% (188.3seconds vs 184.6seconds) when the athlete believed they were racing someone else (although they were only racing themselves). Only in the last 10% of the event did the solo performance “catch up” in terms of power output, almost exactly the same effect as above.

And so if we look at studies that have three conditions we find this.

If you offer a carrot to an athlete in the form of their own PR avatar they will generally improve by about 1%, if you show them a mock competitor they will improve by another 1% (2% total)…..but there is a catch, if you show them a competitor 5% faster they will blow-up and stop, exhausted. It seems there is only so far that the central governor can be fooled. Recently the mechanisms behind this have begun to be revealed.

Deception and the Brain

It has long been known that even in a fatigued state, skeletal muscle can produce surprising force if evoked by nerve stimulation during a maximal voluntary effort but the amplitude of the superimposed twitch decreases with increasing voluntary force. However it is also observed that stimulation of the motor cortex has also revealed submaximal activation of muscles during maximal voluntary efforts of respiratory muscles. What is new is that this could be functionally useful!

Brazilian researchers published a study showing that trained cyclists produced 4% more power and had lower heart rate and perceived effort during an incremental test after a 10-minute bout of tDCS (transcranial direct current stimulation, or tDCS). What is going on? It turns out that perception of bodily fatigue(peripheral fatigue) might be located in the insular cortex and perception of effort (central fatigue) might be located in the anterior cingulate cortex. Two entirely separate areas.

How can you apply central governor theory to enhance your own training? Here are a few tips based on the theory, which should make your training more productive and enjoyable:

Next time, you feel you have reached your limit try and remember it is your brain telling you things are getting tough, not that you have truly reached the exhaustion. Also remember that in a race, others are probably feeling worse. Wasn’t it Greg Henderson who said

“Training is like fighting with a Gorilla. You don’t stop when you’re tired, you stop when the Gorilla is tired”