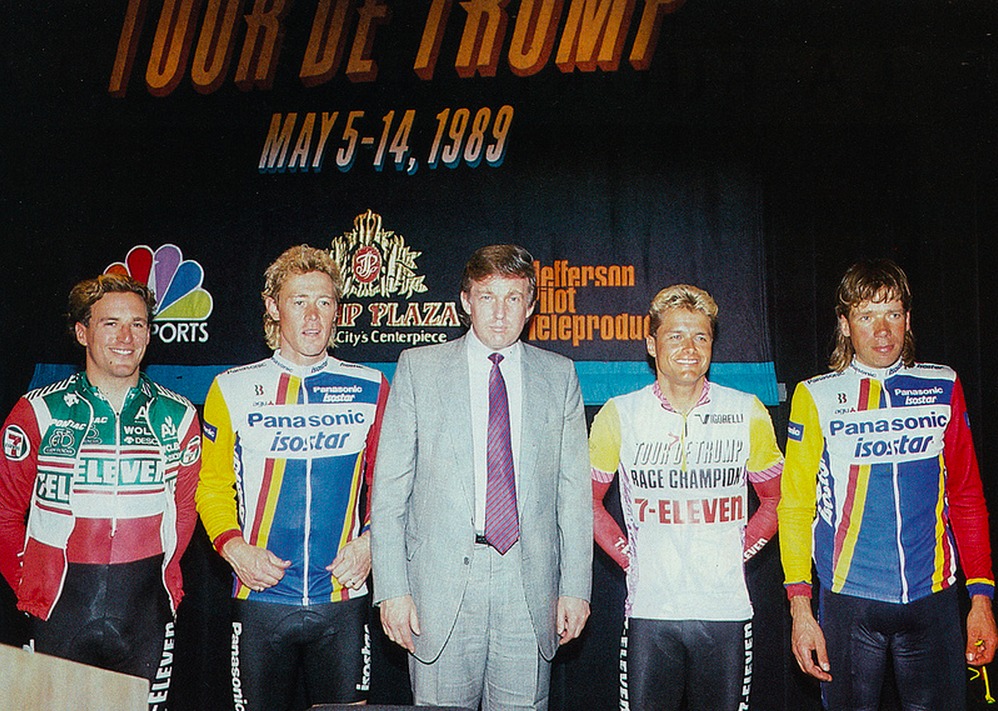 17 Oct 2016
By Campionissimo - In FEATURED ARTICLES, LATEST ARTICLES, THE PODIUM

These days Donald Trump is more interested in becoming the president of the United States, but in the late ’80s the Tour de Trump helped put US pro cycling on the map.

In late 1988, Donald Trump veered from his massive real-state and business holdings into the realms of world-class cycling. “The Donald” did it in a way only he could, by announcing a new event called the Tour de Trump. The multi-stage race would be held May 5-14, 1989, throughout the northeastern U.S. He announced the event as a “rival to the Tour de France.”

As well as putting up a prize pot of $250,000 – a fifth of what the Tour de France offered – and suggesting a criterium around the White House, Trump insisted the race should carry his name.

Asked later why he didn’t call it the Tour of USA, he replied, ‘A lot of the racers came because of the name. I would like to make this the equivalent of the Tour de France.’

The first route started in Albany, New York, and meandered through Pennsylvania, Maryland, and Virginia before finishing on The Boardwalk in Atlantic City, New Jersey, in front of — where else? — the Trump Hotel and Casino.

Dag-Otto Lauritzen of the professional U.S. team 7-Eleven, won the inaugural edition race ahead of a field that included American Greg LeMond, who eventually won the Tour de France that year, as well as many of the top teams in the world at the time, including the PDM and Panasonic squads.

USA Cycling CEO Derek Bouchard-Hall credits the race with raising the profile of US cycling around the world, while its organiser Mike Plant – now on the UCI Management Committee – helped bring last year’s road World Championships to Richmond, Virginia, which featured in the Tour de Trump in 1989.

Trump gained notoriety in unusual places around the globe with the Tour de Trump, which was televised in five continents and more than 100 countries in an era when ubiquitous satellite signals were not the norm. He reveled in the oddity of cycling, saying it was “off the beaten path from his boxing promotion” but it was a sports platform he saw had “massive potential, because of its global appeal.”

Trump was delighted with the race and announced ambitious plans to make the Tour de Trump a coast-to-coast race. But after just one more edition, won by Mexican rider Raul Alcala, Trump pulled the plug because of mounting debts in his property empire.

The DuPont Corporation took over the sponsorship in 1991, and the race ran until 1996, with a young Lance Armstrong winning the final two editions. USA Cycling’s Bouchard-Hall, who raced in the 1995 edition, told Politico magazine earlier this year, ‘I would definitely say the Tour de Trump was great for American cycling. Ultimately a wildly successful endeavour which raised the profile of American cycling internationally and, within the US, raised the profile of the sport of cycling.’