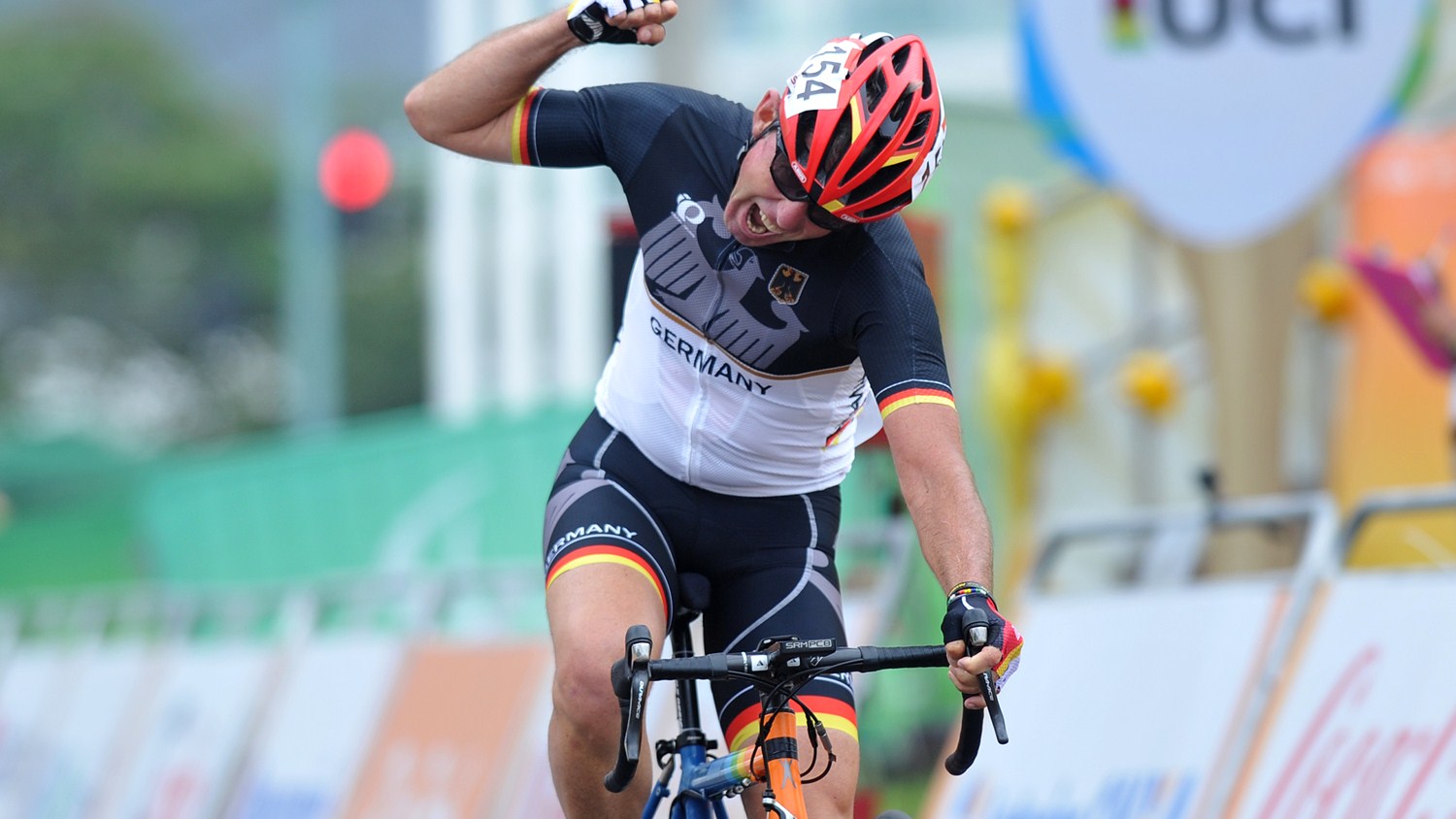 Australia’s Carol Cooke and Germany’s Hans-Peter Durst used the third day of competitions in Pontal, Brazil, to each earn their second titles of the Rio 2016 Paralympic Games. After their victories in the T1-2 time trial, the two paracyclists once again showed their wining ways during the road race.

“In this race it was important 800m before the finish line.I knew if I was there first, it was the win and that’s what happened. It is great to win gold,” commented Durst.

Two-time reigning UCI World Champion of the event, the 58 year-old had been unable to finish the road race at the London Paralympics; David Stone won the gold that year. Even though Stone had to give up his title to Durst, Stone nevertheless will go home with two medals from Rio after having earned the bronze in the time trial.

In Women’s racing, Carol Cooke also earned her second victory of the Games in the T1-2 class. The 55 year-old Australian dominated competitors during the 30 kilometer road race, crossing the line in 1 hour 07 minutes, 51 seconds. This is the third Paralympic title of Cooke’s career, and she’s been nearly unbeatable in road events for the past three years.

“It was a real relief, I think we as athletes put so much pressure on ourselves with our ranking and what we’ve done in the past. On a stage like this, the Paralympics, anything can happen. With 5.5 kilometers to go, just before I took off, I thought ‘geez, this is anybody’s race. I was really emotional on time Trial day, I couldn’t stop the tears from flowing. Today it’s just more of a ‘wow, yay, I’ve done it feeling”, Cooke said post-race.

American Jill Walsh stopped the clock 17 seconds after Cooke, securing the silver medal. Germany’s Jana Majunke rolled in 28 seconds after the winner, and completed the podium.

In C1-2-3, new Paralympic Champions were crowned in both Men’s and Women’s road racing events.

Fifth in Wednesday’s road time trial, Warias finished second in the road race at the London Games, and 2015 UCI World Championships in Nottwil. With their wins today, Bosmans and Anobile have both earned their first Paralympic podium finishes.

“It’s an amazing feeling, I was already two-times World Champion, I won silver in London and now the Paralympic gold… This medal will not go in the sock draw like the others. This Paralympic gold will go in a special place,” commented Warias.

At her first-ever Paralympic Games, Jamie Whitmore finished the Women’s C1-2-3 road race (47.4 kilometers) in a sprint that saw her cross the line first in a time of 1 hour 30 minutes 14 seconds.

Whitmore has been dominating road events for the past three years in the C3 class; this is her second medal at the Rio Games, as she won silver on the track in the individual pursuit event. Whitmore finished seventh in the road time trial.

“I’m feeling fantastic now that I won gold. This has been a life-long dream since I was about six years old and wanting to be an Olympian. I had a very wild pro career as a triathlete and mountain biker. I thought my dream had ended and then there’s this great thing called the Paralympics so I got a second chance,” explained the 40 year-old American.

Another Gold for Team Italy

The day came to a close with Team Italy’s relay victory in the H2-5 class. The mixed relay team composed of Vittorio Podesta, Luca Mazzone, and Alessandro Zanardi completed the 22.5 kilometer course in a time of 32 minutes 34 seconds.

Only 47 seconds behind was Team U.S.A.’s William Lachenauer, William Groulx, and Oscar Sanchez who earned the silver medal. Switzerland’s Lukas Weber, Tobias Fankhauser, and Heinz Frei crossed the line at +1 minute 28 seconds of the winners, and took home bronze.

At the London 2012 Paralympic Games Tem U.S.A. won the gold, with Italy taking second and Switzerland in third place.