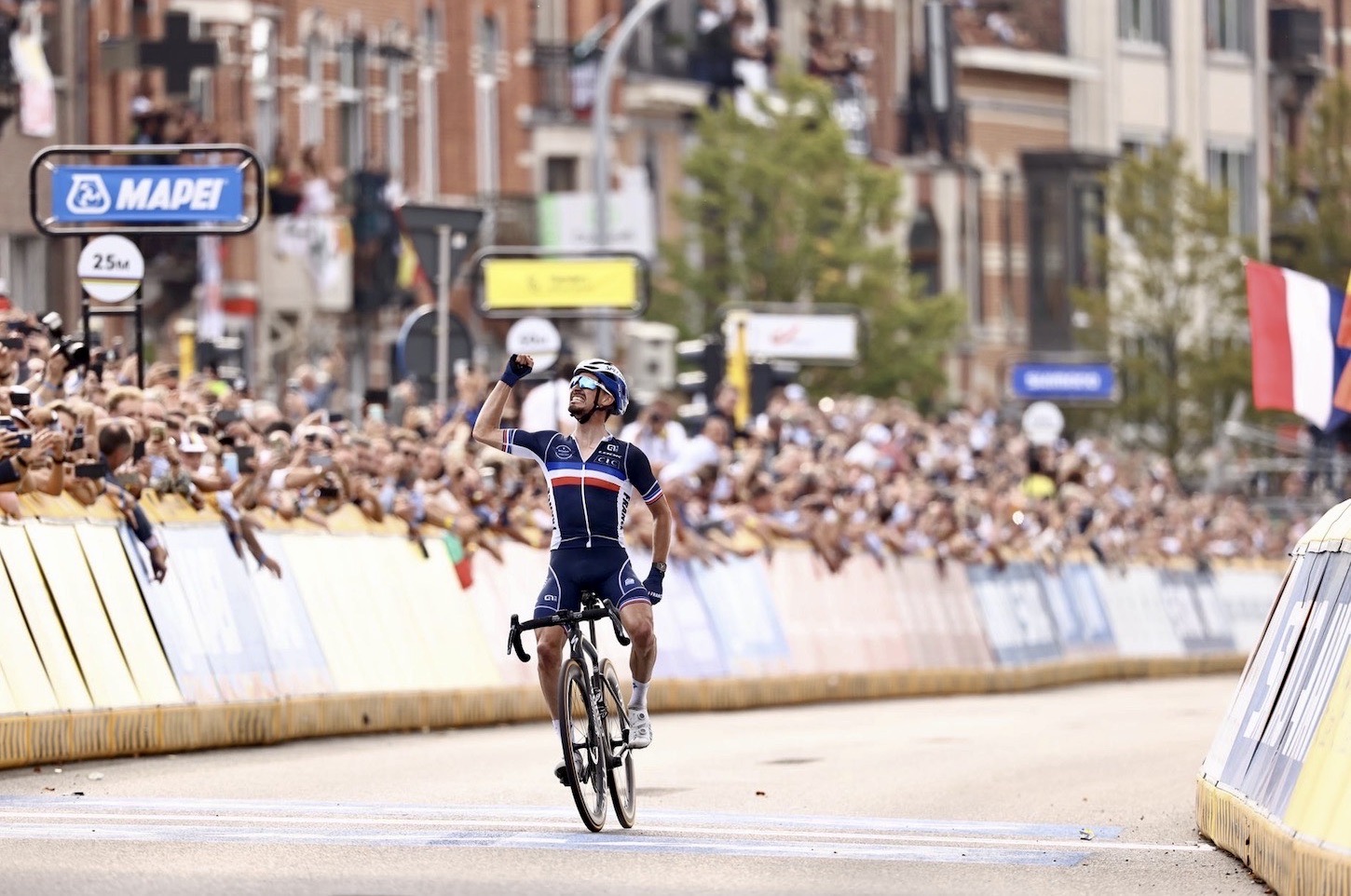 Julian Alaphilippe defended his World Championship Road Race title today, claiming a solo victory in Flanders after attacking with a little less than 60 kilometers remaining, a move that saw French rider hold-off a chasing group by just over half a minute to retain his Rainbow Jersey.

It took three attacks before Alaphilippe managed to escape, having made the jump from a 17-man breakaway group that included pre-race favorites Wout van Aert (Belgium) and Mathieu van der Poel (Netherlands) and Tom Pidcock of Great Britain.

Over time however, Neilson Powless (USA), Stuyven, Valgren and van Baarle were only riders left from the original breakaway group who were tasked with trying to chase down Alaphilippe. But, the defending champion had enough in the tank to defend his title, winning by a gap of 32 seconds.

In the meantime, Van der Poel, van Aert and Sonny Colbrelli (Italy) followed in a group a further 50 seconds back, with Remco Evenepoel (Belgium) featuring prominently throughout the race, marking every key move in support of fellow countryman van Aert before blowing up with 30 kilometers to go.

Attacks flew from the outset of race, with Evenepoel marking out an attack from Benoit Cosnefroy (France) with 180 kilometer still to go.

More than a dozen riders jumped across soon after, with Italy being the only major nation to miss the first break, forcing the Italian squad to exhaust its resources for the better part of 50 kilometers as they attempted to pulled back the escapees.

Meanwhile, the Belgian riders had amassed at the front, with the entire team setting a searing pace in an attempt to thwart any attacks, with Nils Politt (Germany) finally breaking up the deadlock with 90 kilometers to go after a series of attacks from the French.

The race later fractionalized along the Flandrien circuit, with several riders being dropped from the breakaway, leaving just Powless with Evenepoel and three others to chase, while the peloton proceeded to fragment behind them as well.

Alaphilippe later produced his winning move along the steep cobbled climb of the Bekestraat with around 20 kilometers left, jettisoning is rivals and steadily opening up a gap that would prove unassailable.