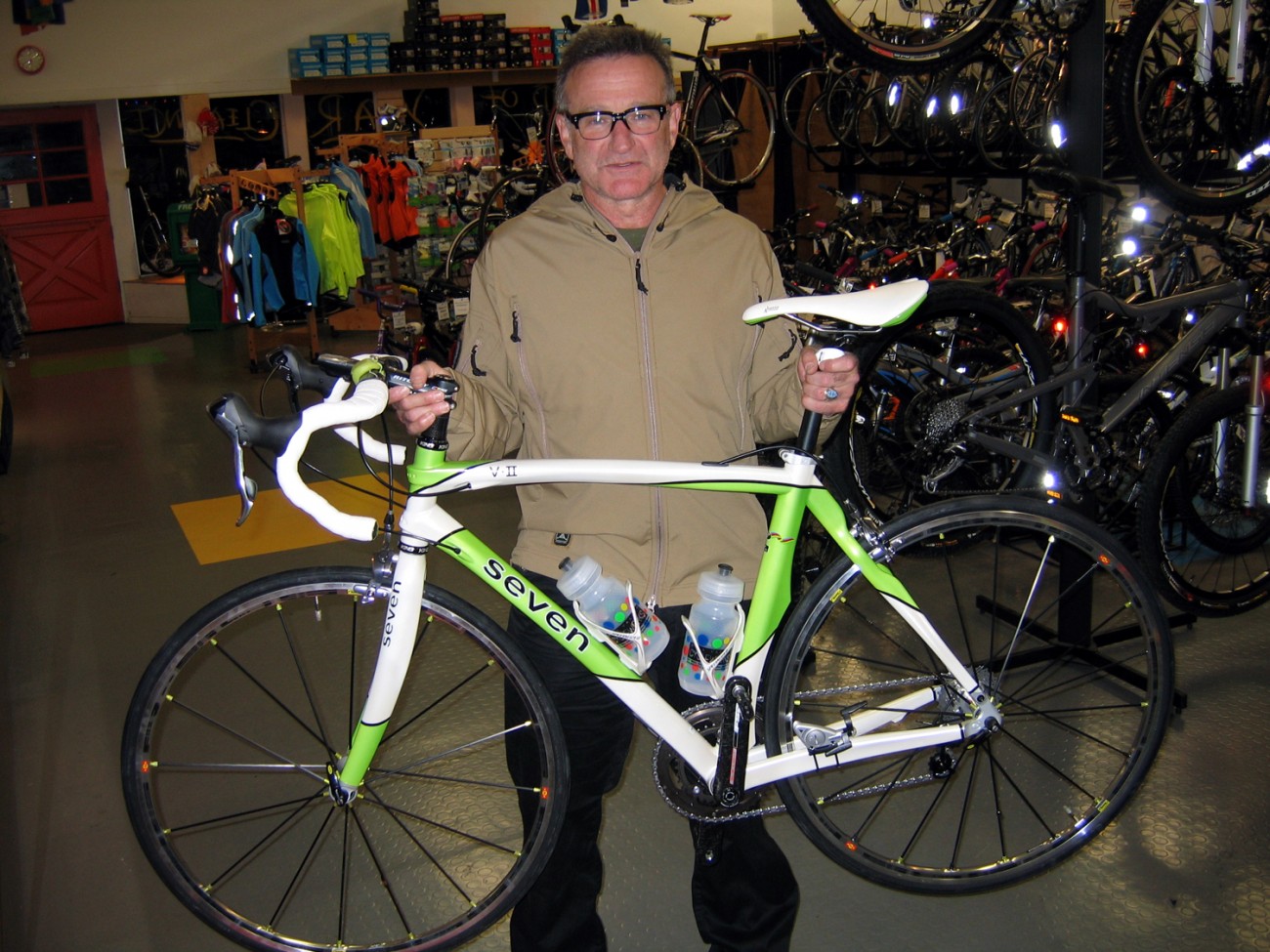 Paddle8, the Williams Family, the Challenged Athletes Foundation (CAF) and the Christopher & Dana Reeve Foundation today announced the results of the Robin Williams Bicycle Collection benefit auction, which raised more than $600,000. All bicycles received multiple bids from around the world and more than doubling the high estimate. The auction on Paddle8 raised these critical funds for both organizations to further support the communities they serve.

An avid cyclist, Williams was beloved by the cycling community and collected a number of high-end and custom bicycles as well as commonplace mountain bikes and roadsters. The sale consisted of a selection of 87 bicycles from Williams’ personal collection highlighted by the Master Pista, La Carrera Futura 2000 bicycle winning the highest bid at more than $40,000. Other notable bicycles included a Dario Pegoretti Responsorium and Love #3, Serotta Ottrott, Trek Madone 7 Diamonds, a Zipp racing bike, and a Schwinn Unicycle.

Robin Williams’ bicycles drove unprecedented traffic to Paddle8, with more than six times the usual visitors at the peak of the sale, serving as testimony to the late actor’s enduring legacy. Paddle8 co-founder Alexander Gilkes states, “This sale has been a fitting tribute to the immense compassion and generosity of Robin Williams and his wonderful family. The success is testament to the unfaltering adulation for Robin, the immense intrigue in such a personal collection and the alignment with two worthy causes.”

As well-known for his philanthropy as he was for his acting, Williams was devoted to a number of charitable causes and served as an ambassador to CAF and the Reeve Foundation to raise awareness for the millions of Americans living with disabilities. As a result of his fierce dedication, both organizations have advanced their shared mission of helping individuals living with physical challenges achieve improved health and quality of life, while promoting greater inclusion and independence.

Williams’ children, Zak, Zelda and Cody, are continuing their father’s philanthropic legacy through their ongoing commitment to CAF and the Reeve Foundation.

“We would like to thank everyone who participated in this auction for their generosity of spirit and for helping raise funds for these two causes so close to our Dad’s heart. He would love the fact that his bikes will be used and appreciated by new owners and, at the same time, allow thousands of people to live more active and fulfilled lives.”

Robin Williams was instrumental in the growth of CAF’s mission to provide opportunities and support to people with physical challenges so they can pursue active lifestyles through physical fitness and competitive athletics. CAF believes that involvement in sports at any level increases self-esteem, encourages independence and enhances quality of life.

Williams and his family were fixtures at CAF events, including the San Diego Triathlon Challenge (SDTC). Robin was an 11-time participant in the SDTC, where able-bodied individuals and challenged athletes compete side-by-side to display the power of the human spirit. At the triathlon, Robin participated as the cyclist on Team Braveheart. His teammates included Scott Tinley, two-time Ironman World Champion and Hall of Fame inductee, and Rudy Garcia-Tolson, a double amputee and two-time Paralympic gold medalist swimmer. In addition, Robin was an enthusiastic participant in the CAF 3-day NorCal Back to Back Cycling Challenge and came out annually to share words of encouragement with riders at CAF’s Million Dollar Challenge, a week-long 620-mile bike ride from San Francisco to San Diego.

In March 2015, the organization hosted A Celebration of Will, a CAF gala to honor the legacy of Robin Williams that raised over $2 million dollars for the Challenged Athletes Foundation Endowment in Memory of Robin Williams.

“When Robin participated at events for the Challenged Athletes Foundation, he would always say, ‘It’s like coming back to family,’” said Jeffrey Essakow, Chairman of the Board, Challenged Athletes Foundation. “Robin was family and served as a beacon of hope for athletes with physical challenges. He showed the world that the power of humor and kindness can make a tangible difference. We are honored to join the Reeve Foundation and recognize Robin through this auction.”

Robin Williams was equally as influential in advancing the Reeve Foundation mission to cure spinal cord injury and improve the quality of life for all individuals living with paralysis. With the Williams family’s steadfast support, the Reeve Foundation has invested over $122 million to speed the development of treatments for spinal cord injury and realize Christopher Reeve’s dream of a world of empty wheelchairs. Williams also championed Dana Reeve’s vision to enhance quality of life through the Reeve Foundation’s Paralysis Resource Center, a constellation of services to serve families impacted by paralysis.

Christopher Reeve and Robin Williams met in 1973 as roommates at the Julliard School and became lifelong friends. After Reeve sustained a spinal cord injury, Robin joined the Reeve Foundation Board of Directors and continued to support the organization following Reeve’s passing in 2004.

The Reeve Foundation honored Williams in 1998 with the inaugural “Human Spirit Award” and recognized him again in 2007 for his tremendous impact. His family continues to remain active and involved by participating in events, including the Foundation’s gala, A Magical Evening.

“Like Christopher Reeve, Robin Williams was an unmovable force. To have them in the same room, let alone fighting for the same cause, was extraordinary,” said Peter Wilderotter, President and CEO, Christopher & Dana Reeve Foundation. “Robin provided unending support without fanfare or question, and became a powerful voice for the 5.6 million Americans living with paralysis. Thanks to his efforts and the generous contributions of his family, cures for spinal cord injury are now within reach. Being part of this auction with Challenged Athletes Foundation is a beautiful way to honor his legacy of giving.”