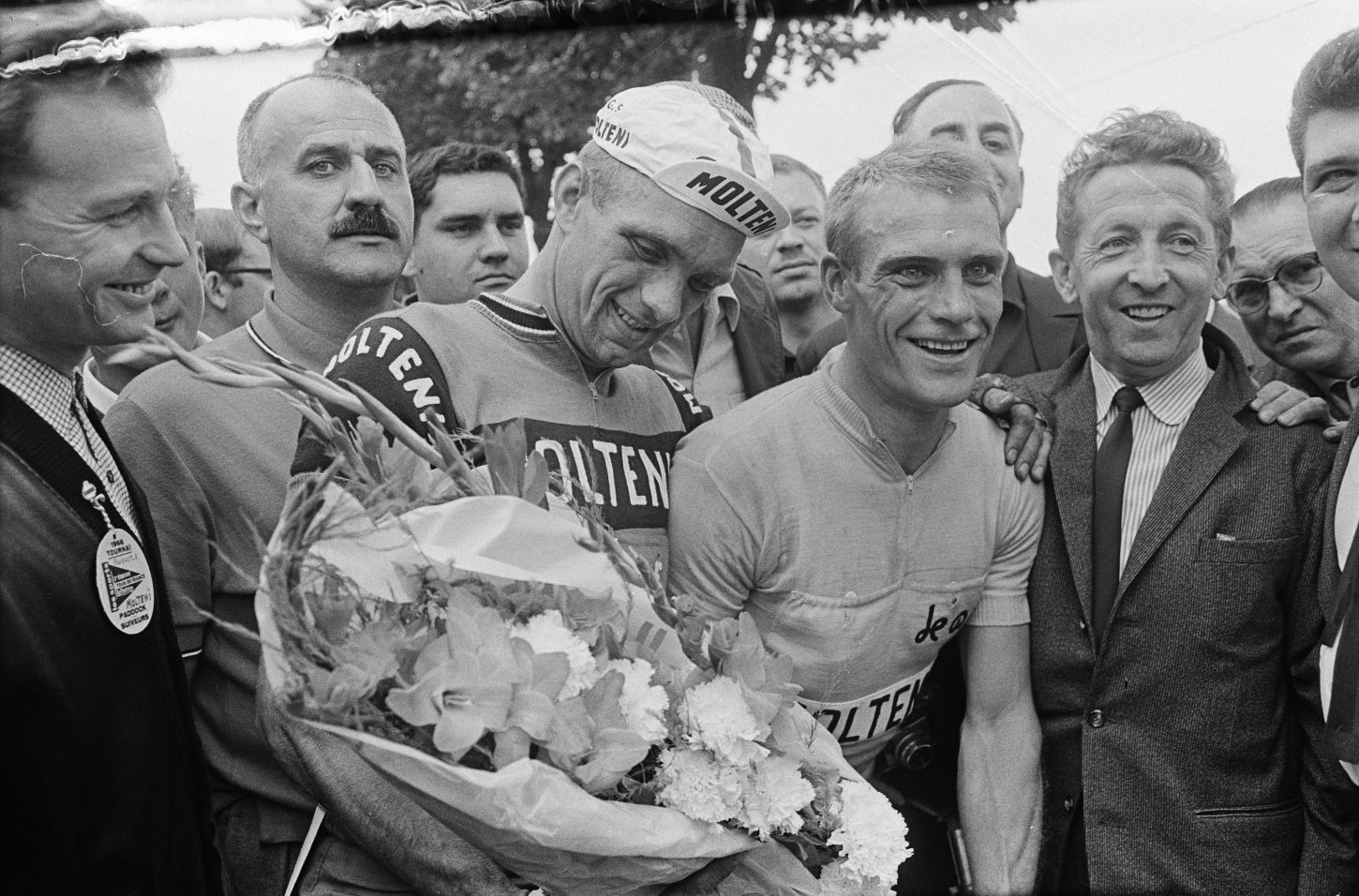 Altig is best remembered for being the first German rider to win the Vuelta a Espana, after claiming the title of the 1962 race ahead of Jose Perez Frances of Spain and Seamus Elliott of Ireland, while also capturing the Points Jersey in that year’s Spanish Grand Tour as well.

In addition, Altig also won the Points Jersey in the 1962 Tour de France.

Altig also led a successful campaign as a one-day Classics rider, winning the 1964 Tour of Flanders and the 1968 Milan-San Remo Classic, along with a victory in the 1966 World Championship Road Race, after beating Jacques Anquetil and Raymond Poulidor of France.

Altig was born in Mannheim, Baden, Germany, an area which became known for producing a number of successful riders.

Following in the footsteps of his older brother Willi, Altig began racing in 1952 with a focus on track. And, together the two brothers quickly established themselves as an unbeatable pair in the Madison event, for which they won the national title.

As a result, the notable British race promoter, Jim Wallace, recruited Altig to ride alongside Hans Jaroszewicz in the Herne Hill Velodrome events in 1956, where the two proved to be a formidable duo. Wallace remarked:

What a pair they made! They just about slaughtered a top-class field of international riders, with all our best home lads. Only Michel Rousseau, later that year to become world sprint champion, was able to take a points sprint from them. That was in the first sprint, too; thereafter the German pair gained not only every sprint for points but every prime [lap prize] as well … They went on to Coventry [another meeting held over Easter] and did much the same thing, winning everything in which they rode, so classy was their performance.

The next year, Altig became the national sprint champion, which was followed up with a repeat performance in 1958. This caught the eye of German coach Karly Ziegler, who quickly recruited Altig for the Endspurt Mannheim team as a pursuiter.

Zeigler’s decision was capital, as Altig went on to win the 1959 National Pursuit Championship, as well as the Madison championship with his brother, while later that year he beat many of the world’s best pursuiters to become world champion in Amsterdam.

Altig turned professional in 1960, embarking upon his first Six-Day race in Denmark. The German rider’s transition seemed so seamless that Wallace once again went on record as saying.

No man ever settled down better or quicker to a pro career than the able Altig. In the hurly-burly world of indoor track racing. Rudi never seemed a novice. Settling down at once, tearing strips off established stars, he soon started to fill indoor tracks which had long forgotten the welcome sight of a ‘house full’ sign. He brought back the biggest winter racing boom to Germany for many years, reminiscent of the balmy pre-war days. With seven tracks at home – more than in the rest of Europe – Altig had a busy time and was soon in the big money.

From there, Altig went on to win the World Pursuit Championship in 1960 and 1961, amassing a total 62 race victories on the track, which included 22 Six-Day races.

Perhaps, Altig’s greatest collaboration was with famed French rider Jaques Anquetil, when the two paired for the 1962 Trofeo Baracchi, a 111 kilometer two-man time-trial in Italy.

Generally in a race of the Barrachi type, the changes are very rapid, with stints of no more than 300 yards. Altig was at the front when I started the check – and he was still there a minute later. Something must be wrong. Altig wasn’t even swinging aside to invite Anquetil through… Suddenly, on a flat road, Anquetil lost contact and a gap of three lengths appeared between the two partners. There followed one of the most sensational things I have ever seen in any form of cycle racing during my 35 years’ association with the sport – something which I consider as great a physical performance as a world hour record or a classic road race win. Altig was riding at 30mph at the front – and had been doing so for 15 minutes. When Anquetil lost contact, he had to ease the pace, wait for his partner to go by, push him powerfully in the back, sprint to the front again after losing 10 yards in the process, and again settle down to a 30mph stint at the front. Altig did not this just once but dozens of times.

However, despite the duo winning the race by nine-seconds, Anquetil was met with catastrophe when he struck a pole at the finish.

The five-time Tour de France champion was seen being help away with staring eyes and blood streaming from a cut to his head.

While still focussed mainly on track, Altig was persuaded by his team at the time, Raphaël Géminiani, that his future lied in road racing. Thus, he decided to compete in his first Tour de France, where he led the general classification for five days and claimed three stage victories as well as and the overall Points Competition.

That same year, Altig won the overall victory in the Vuelta a España, along with three stages.

Altig won his first Classic in 1964, the Tour of Flanders, after commencing a solo breakaway that endure for 60 kilometers, seizing the race honors more than four minutes ahead of his closest rival.

That same year he won the German National Road Race Championship as well.

However, the following year was met with disappointment, after finishing second to British rider Tom Simpson in the World Championship Road Race in San Sebastián, Spain. Simpson remarked:

I could not accept that Altig could beat me. Going round the back of the circuit we came to a gentleman’s agreement. Both of us had worked hard in our little break and therefore we each deserved an equal chance of victory. We agreed to separate when we reached the one kilometer to go board and ride in side by side. Altig was quite happy about this for I am sure he thought he could put it across me. So there we were, two gentlemen virtually fighting a duel over the last kilometre. I was glad that Altig had accepted my proposal for it was the fairest way out. I have always regarded him as a great rider and his showing that day did nothing to make me change my mind.

Altig found consolation in winning the World Championship Road Race at the Nürburgring the following year. However, there was some controversy over his victory, as many perceived that he had been helped by Gianni Motta, who despite riding for Italy that day, was normally Altig’s teammate on the Molteni team.

The concern was quickly overshadowed by the refusal of the first three riders to give urine samples for drug testing.

As the story goes, they were protesting at what they saw as a laxity in the manner in which testing was being carried out.

His second and final Classic victory came with the 1968 Milan–San Remo title. He also won two stages of that year’s Vuelta.

The following year Altig finished a paltry 9th in the Giro, but found solace in winning the opening individual time trial in the Tour de France, earning him the maillot jaune (yellow jersey) for one-day.

Altig retired from racing in 1970, but not without a slew of victories in a number of lesser-known races such the Rund um den Henninger Turm, Sassari-Cagliari, G.P of Diessenhofen, Critérium de Grobbendonck and the German National Championship that year.

Upon his retirement, Altig became directeur sportif for the Puch-Wolber team, as well as Germany’s national coach. He also worked as a television race commentator for a number of years.

Altig died in Remagen, Germany at the age of 79, as a result of cancer.