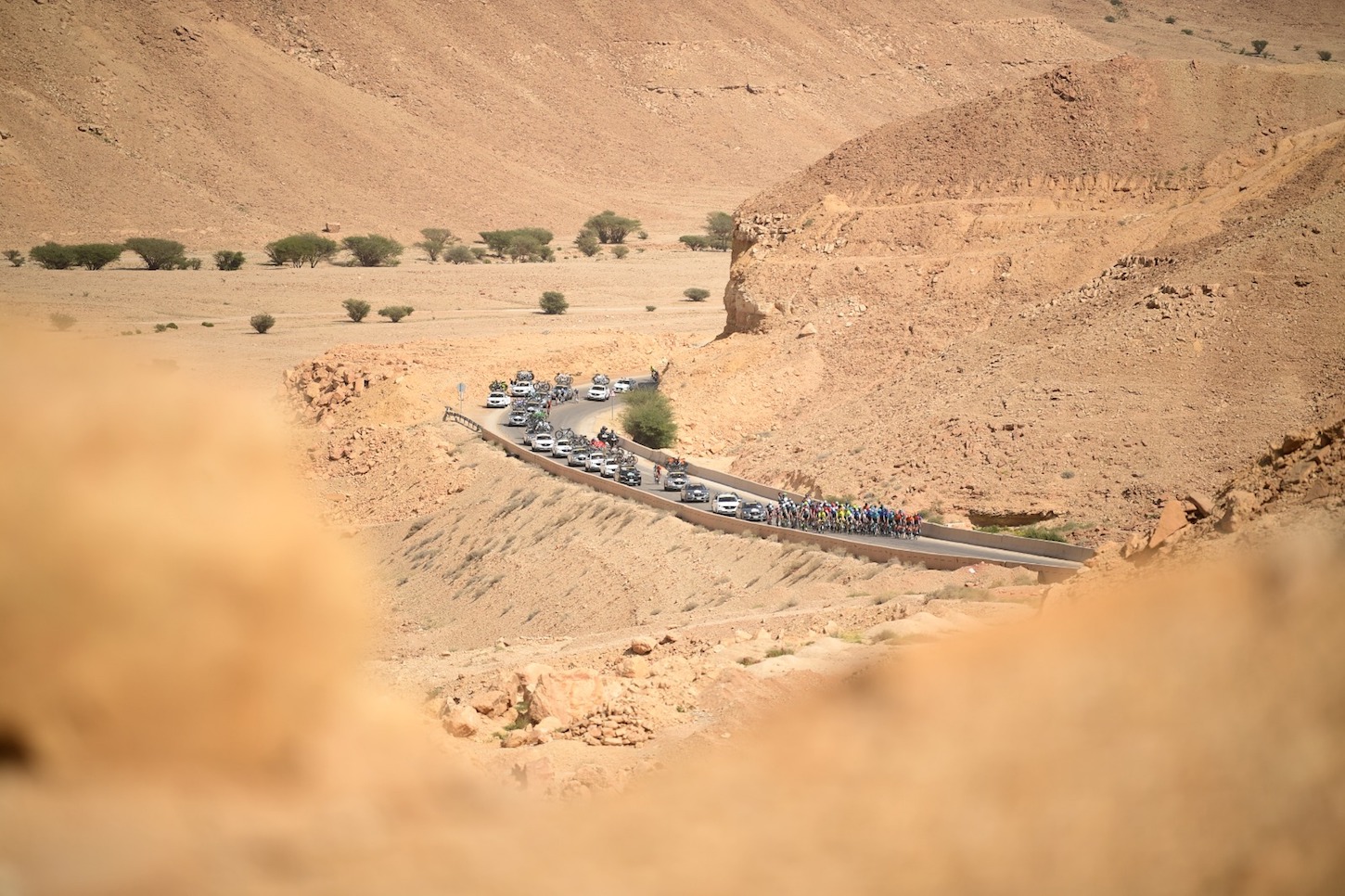 As a result, Bouhanni is now the wearer of the leader’s green jersey heading into tomorrow’s final stage.

At the start of stage four of the Saudi Tour situated at the Wadi Namar Park, the 116 riders of the event were warmly welcomed by a part of the Saudi Arabian national cycling team. Seven Saudi riders were even honoured to ride ahead of the pack in the neutral zone on the way to km 0 before the official start. And a fast start it would be on the day’s 137-km stage to Al Muzahimiyah King Saud University.

Despite quite a few attempts in the opening moments of the race, the first decisive move happened after 18 kilometres when three men pulled away: Zukowsky (Rally Cycling), Kangangi (Bike AID) and Tipper (Ribble Weldtite Pro Cycling). They reached the first intermediate active sprint, led out by Zukowsky with a 30” advantage over a group of four including Paaschens (Wallonie Bruxelles), Fuentes (Burgos-BH), Boev (Gazprom-Rusvelo) and Nicolau (Caja Rural-Seguros RGA) and 2’ over the pack led by team Bahrain-McLaren. At km 37 the front three were eventually caught by the chasing four.

The leading seven continued their progression and the gap grew and reached 3’10 at the second sprint won by Fuentes comforting his lead in the Most Active rider standings. In the battle for that polka dot jersey, Nicolau got his revenge at the third intermediate sprint beating Fuentes for the 3 points, while the gap reached 5’ over the pack.

But as expected the race got far more entertaining as the riders took on the Qiddiyah climb. On the final kilometre of the uphill portion, Nicolau took off on his own. The Spaniard  made it first to the fourth sprint with a 10” advantage over Zukowsky and 25” over Paaschens. Behind the UAE team Emirates of Rui Costa accelerated making life hard for their rivals. While polka-dot jersey wearer Fuentes was dropped and eventually caught by the pack, the eight front riders bunched up together again on the descent.

On the second climb, Green jersey Phil Bauhaus suffered a mechanical incident and was dropped from the peloton while again the UAE team powered to the front. Behind the leading riders, a group of 11 men took off including Rui Costa (UAE Team Emirates), Doubey (Circus-Wanty Gobert) and Garcia Sosa (Caja Rural-Seguros RGA). At the bonus sprint (km 113), Nicolau captured 3 precious seconds and points ahead of Paaschens and Kangangi while Rui Costa was only 15” adrift and the overall leader as well as Nacer Bouhanni over a minute behind.

On the long descent the pack finally bunched up again and the leaders were caught. At the bottom, Rui Costa once again powered away with 8 kms to go, taking with him Doubey. Both men could enjoy a 15” lead with 5 kilometers remaining. Their efforts finally proved to be vain as all the strong men of the Saudi Tour bunched up together again. The decision would be made in a sprint between over 60 riders.

Well led out by his Arkea-Samsic team mates, Nacer Bouhanni flew to victory outsprinting Niccolo Bonifazio and Yevgeniy Gidich. In the top 5 of the three previous stages (and the top 3 of the first two days), the Frenchman confirms his fine form claiming his first win of the year. Already a winner of three stages on both the Giro and the Vuelta, Bouhanni adds a victory in Saudi Arabia.

Thanks to his stage success, the sprinter takes command of the general classification and will be wearing the Green jersey on tomorrrow’s final stage with a slim 2” advantage over Phil Bauhaus (Bahrain-McLaren) and 5” over Rui Costa. Bouhanni also leads the points classification while Kron (Riwal Readynez Cycling Team) remains best young rider and Nicolau conquers the Most Active rider’s jersey.