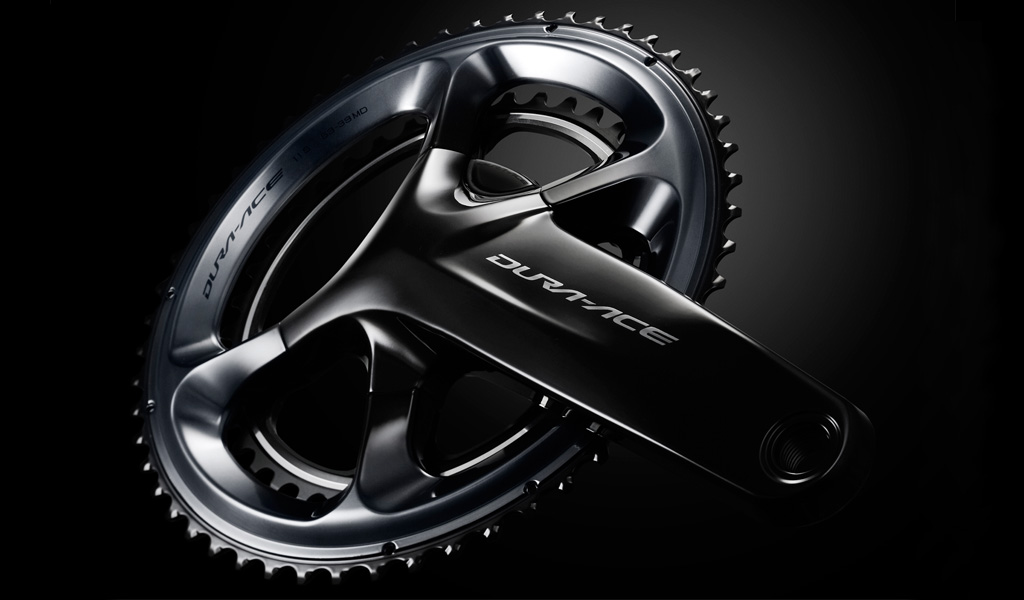 So what sets it apart?

However, when we say slightly lighter, we’re referring to just 7g.  😉

Contrary to some of the rumors that were previously whirling about that the next generation Dura-Ace crankset might be carbon fiber, the R9100  remains all aluminum, and its available in 50-34T, 52-36T, 53-39T, 54-42T and 55-42T configurations, with crank arms lengths ranging from 165mm to 180mm.

“Not only can the pure output of watts be measured, left and right legs can be measured separately, as well as cadence, giving you the truest measure of performance, isolated from external factors such as gradient, road surface and wind.”

Compared to previous add-on designs, the power meter’s strain gauges now sit inside the left and right crank arms, while the computer is nicely concealed inside the spider. Moreover, the power meter runs on an integrated battery, which can recharge itself magnetically with the proper adapter, thus eliminating the need to remove covers or casings.

As far as shifting goes, the new Dura-Ace is available in both mechanical and electronic (i.e. R9150) versions, with choices of either traditional caliper or hydraulic disc brakes. The shifters for the disc brake version, needless to say, are shaped differently in order to accommodate the hydraulic internals.

But, according to Shimano, both versions feature more of a “click” as it relates to shifting, which they claim gives the rider more “feel”.

Additionally, Shimano has added its Synchronized Shift technology to the electronic version, which is a direct cross-over from the brand’s off-road segment.

“Shimano Synchronized Shift is designed to choose the next biggest or lowest gear ratio irrespective of whether a gear change needs to be made by the front or rear derailleur,”

• Full Shimano Synchronized Shift: the front derailleur reacts based on the rear derailleur’s shift action. This essentially means that, when activated, there is no need for two separate shifters to control front and rear derailleurs, the two buttons on one shifter will control both derailleurs.

• Semi Shimano Synchronized Shift mode: the rear derailleur reacts based on the front derailleur’s shift action, shifting to the next most appropriate rear gear when the rider makes a front shift.

Shimano believes this has tremendous implications for both the time-trialist and triathlete. To wit:

“Reducing the number of buttons simplifies decision making stress for riders and allows lever dimensions to be slimmed down by 28% (from 40mm wide to 29mm) and lever weight to be reduced by 22% (from 128g to 100g).” “Satellite shifters also incorporate this new one button feature.”

The R9100’s front and rear derailleurs have been greatly revised as well, which according to Shimano has not only led to even more precise shifting, but their smaller size has also resulted in a reduction in weight, while also keeping them further out of the way in the event of a crash.

“Both electronic derailleurs are compact and designed to protect the shifting operation in the event of a crash.” “The low profile of the rear derailleur also comes with Shimano Shadow Rd technology, positioning the derailleur further below the functioning sprocket.”

In fact, Shimano foresees frames in the future having a built-in port which will conceal the box entirely, while leaving the buttons accessible for adjustment and recharging.

The new Dura-Ace also incorporates for the first-time, its own hydraulic disc brakes series, as compared to the previous non-series. And, Shimano is quick to point out, these are not simply rebadged brakes with the Dura-Ace logo slapped on them.

“New dedicated Dura-Ace rotors bring better heat management properties to provide stability in brake performance.” “With an increased adaptor size, heat transfer through the rotor is decreased and more heat can dissipate through the air. This results in a 30°c reduction in rotor temperature over Shimano’s ICE Technologies Freeza rotors.”

Additionally, rim brakes are available in both dual-pivot or direct mount, with the ability to accommodate tires up to 28mm wide. Also, Shimano says they have slimmed down the calipers a bit too and added a booster between the pivots.

Cost and avaibality you ask?

Shimano says they expect to make the new Dura-Ace available in the Fall of 2016, with pricing to be announced.