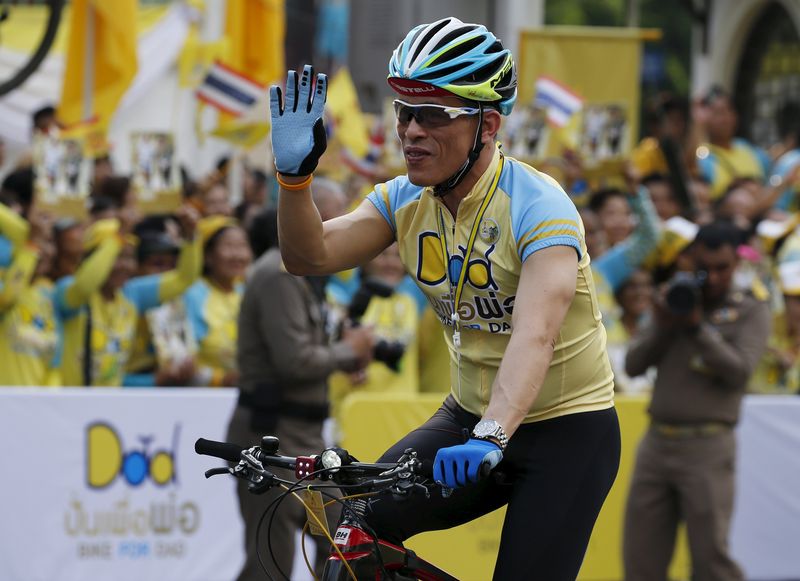 In a rare public appearance, Thailand’s crown prince, Maha Vajiralongkorn, led a mass cycling event across his nation’s capital today, as a tribute to his father King Bhumibol Adulyadej, who been in ailing health.

Thais and foreigners, clad in the King’s official color of yellow, lined the streets along the 29 kilometer route, to cheer on the participants as Prince Vajiralongkorn led 100,000 cyclists across Bangkok in the inaugural Bike for Dad event.

The event was organized by the Royal Household and the Crown Prince, to celebrate the King’s 88th birthday, which took place on December 5.

The ride started at Dusit Palace, and saw cyclists pedal past the Central World mall, the Erawan Shrine and Sriraj Hospital where King Bhumibol Adulyadej is currently admitted due to poor health, while the route finished back at the palace.

Many of the participants said that they were delighted to be able to be part of the first-ever Bike for Dad event, which follows the similar Bike for Mum event in August, which saw 136,411 cyclists participate.

“The event is a great way to support the King, but also to exercise”, said Tritus Soitongieun from Bangkok. “Especially as cycling has become so popular in Thailand.”

Today’s Bike for Dad event required the city’s 84 roads had to be shut down for the day, along with 100 school closings.

The public however, seem undeterred by this, waving yellow flags and taking pictures in the streets along the route.