CapoVelo.com
CapoVelo.com - - The 2020 Tour De France Will Be Won in the Individual Time Trials, Not the Climbs
78911
post-template-default,single,single-post,postid-78911,single-format-standard,no_animation

The 2020 Tour De France Will Be Won in the Individual Time Trials, Not the Climbs 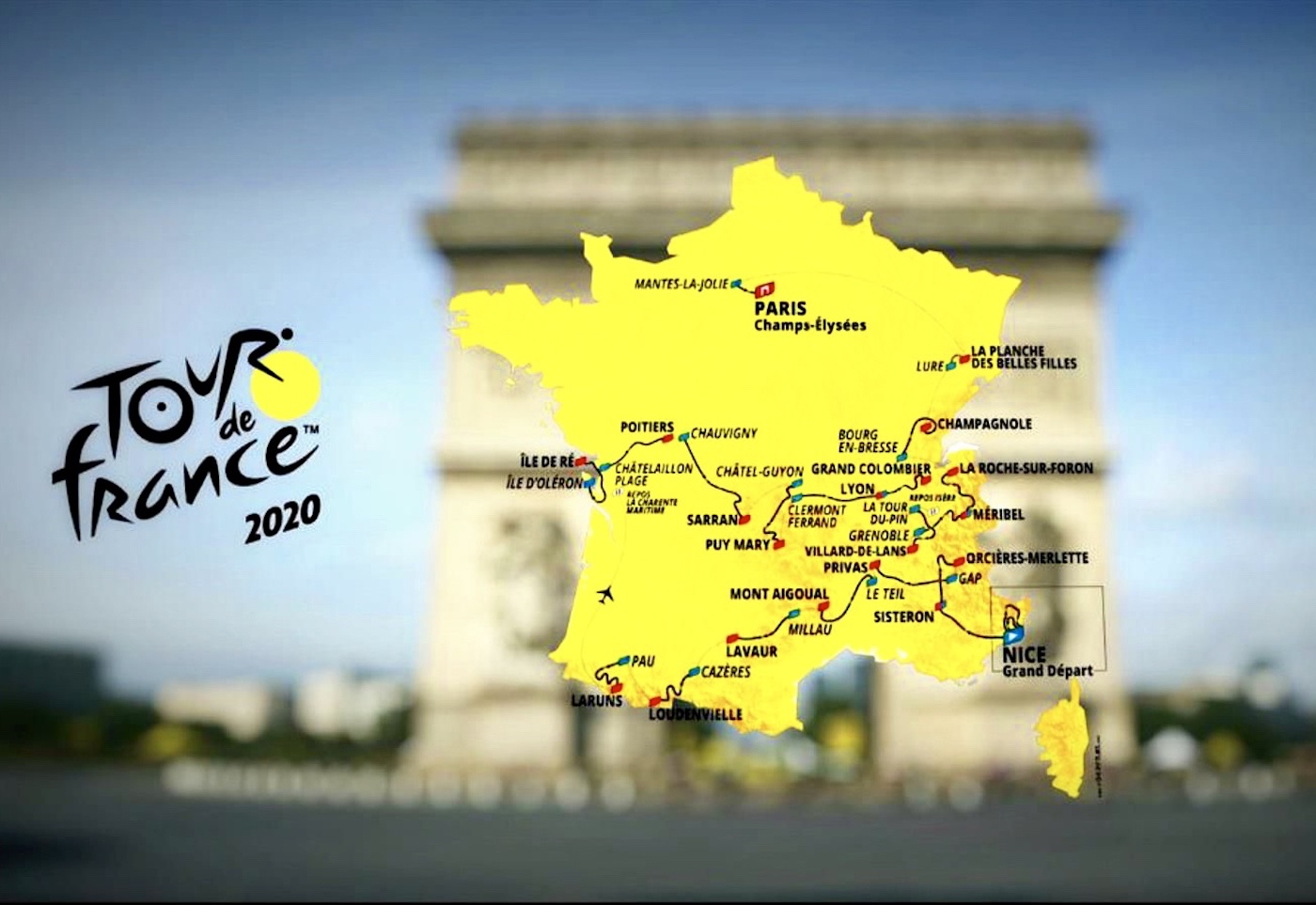 The route for the 2020 Tour de France was recently unveiled. The initial takeaways seemed to be that it is a time trial-light affair that will tend to suit the pure climbers, and that its multiple mountain stages will somehow offer bite-sized, endless entertainment for the short-attention-span millennial audience. A closer look suggests that it probably won’t be that simple.

The general consensus is that 2020 will be one for the climbers, as the race features a large number of mountain stages with a healthy dose of summit finishes, just one 36-kilometer individual time trial, and only a handful of stages for the sprinters. Also, as in 2019, there will be time bonuses at the finish and on select penultimate climbs.

These characteristics seem likely to combine to create a race that will favor riders who can climb with the best, who can handle technical descents, and who can make split-second tactical decisions on the road, particularly in the event of crosswinds.

The problem with this narrative is that it doesn’t really take into account two of the most defining trends of the modern grand tour – (1) world-class time trialists slimming down to extremely light weights in order to win grand tours or, more rarely, (2) natural climbers honing their TT craft to the point where they don’t lose significant time in the race against the clock.

The bottom line – particularly in the typically more mountain-intensive Tour de France – is that at their fittest and lightest, grand tour machines with world-class time trial pedigrees like Tom Dumoulin, Geraint Thomas, Chris Froome, and Primož Roglič can ride such a high tempo on climbs that pure climbers are unable to build up significant time gaps on them. On the flip side, climbers like Egan Bernal and Vincenzo Nibali have had to hone their time trialing to limit losses against the clock since the time differences they can pull out on their more favored steep mountain summit finishes is limited.

So, despite all the media assertions, the 2020 Tour may well end up being decided by the individual time trial on the penultimate stage of the race. While this single 36km ITT has been widely reported or criticized as paltry, the 2020 route is actually the most ITT-heavy one since 2017 (with that edition only having 0.5km kilometers more). In fact, 2020 has 50% more solo time trial kilometers than in 2019 and almost three times as much as the 2015 edition.

While the time trial does finish on the brutally steep La Planche des Belle Filles (5.9km at 8.5%), it still provides 30km of flat or rolling roads – longer than the total amount of time-trialing in the 2019 route – for the bigger engines to build up time. Even with the inclusion of the finishing climb, the scales should tilt in favor of multi-talented riders like Dumoulin, Roglič, and Thomas (or a healthy Chris Froome) – racers who have proven they can outclimb the pure climbers in upwards-tilting time trials.

This theory is supported by Roglič’s win at 2019 Giro’s opening stage which finished on the steep climb to Madonna di San Luca in Bologna; Froome and Dumoulin finishing 1st and 2nd at the 2016 Tour de France climbing TT on stage 18; and Dumoulin, Roglič and Froome going 1, 2 and 3 at the 2017 TT World Championships, which finished with a 3.5km climb at an average gradient of 9.1%.

In recent years past, Dumoulin has voiced his displeasure with the Tour de France’s generally ITT-light routes, and has opted instead to focus on the Giro d’Italia – and it seems that as long as Christian Prudhomme is race director Dumoulin is unlikely to get his desired ITT-heavy route. 2020 may offer Dumoulin the best chance in the last several years, but he will have to create a race-winning difference in those 36km if he wants to be the Tour de France winner.

The Giro has also recently announced its 2020 route, serving up a traditional and literal tour of the country, with a TT-heavy route and pretty much all the climbing action packed into the third week. The idea that “the Tour is for climbers” and “the Giro is for the time trialists” is widely repeated – that grand tours featuring a “balanced” route, heavier on TTs, will produce different winners than an “unbalanced” route that is heavy on climbs and light on time trials. This concept seems to be popular in cycling media and amongst fans, but we would argue that it is demonstrably false.

We have seen time and time again that the same handful of riders possess both the time trialing and climbing talent to win grand tours – that the variability of TTs and climbs don’t actually affect the outcomes that much. For example, the 2015 Tour de France had the fewest individual time trial kilometers in the last twenty editions of the race (14km) and was won by double Olympic time trial medalist, Chris Froome, while the ITT-heavy 2019 Giro d’Italia (59.8km) was won by one of the closet things today’s peloton has to a pure climber, Richard Carapaz.

The most ITT-heavy route in the last twenty editions was the 2007 Tour de France, which featured a whopping 117 solo time trial kilometers, won by Alberto Contador, a climbing specialist. Dennis simply doesn’t have the ability to climb with the other quality time trialists like Froome, Dumoulin, and Roglic. A rider like Bernal can limit his losses to Dennis in the time trial to a few minutes and then put 20-plus minutes into him the next day on a difficult mountain stage. In fact, Bernal can be a deceptively strong time trialist: he finished only nineteen seconds behind Dennis in the pancake-flat 19.2km time trial in the 2019 Tour de Suisse.

And, on the flip side, even the very best climbers have to be able to time trial at a high-level in order to win grand tours, particularly the Tour de France. Bernal’s ability to limit his time loss to Thomas to fewer than ninety-seconds in the 2019 Tour de France’s lone individual time trial was one of the main reasons he was able to secure overall victory. Vincenzo Nibali, the 2014 Tour de France champion, is a great climber who isn’t considered a strong time trialist. However, he finished a very impressive fourth place in the lone time trial of the 2014 Tour de France. Even Carlos Sastre, probably the weakest time trialist to win a recent Tour de France, had to put in an extremely impressive stage 20 time trial to win the 2008 Tour. He finished within thirty seconds of the strong time trialist and eventual second-place finisher Cadel Evans and nearly thirty seconds ahead of Chris Froome, who would go on to finish third at the Olympic TT four years later.

One critical recent exception to this rule seems to be Carapaz. He is undoubtedly the worst time trialist to win a recent grand tour. He lost significant time in all three individual time trials at the 2019 Giro d’Italia, yet made massive time gains in the mountains on stage 13 and 14. However, this may have been primarily due to the fact that early favorites Nibali and Roglic were riding with weak team support, and were almost obsessively marking each other in the mountains, allowing Carapaz to sneak away and gain time on several critical stages.

These time gains, while impressive, likely wouldn’t have happened at the Tour de France, where typically stronger and more motivated teams would have pulled back any move that could jeopardize overall placement. The increasing emphasis in the peloton on efforts against the clock probably means that natural climbers with weaker time trial skills who may have won other grand tours, like Nairo Quintana, or career podium finishers like Romain Bardet, will likely never win the French grand tour.

As we’ve seen in recent years at the Tour de France, top riders struggle to put major time gaps into each other in the mountains. The top GC riders tend to mark each other more closely in the mountains when there are fewer time trial kilometers later in the race where they can make back time.

The real bottom line here is this: most of the sport’s strongest GC contenders originally climb up through the ranks by focusing either on being a strong climber or a strong time trialist. But the evidence shows that if they are going to make it to the very top of the elite level, they must concentrate and focus on improving in their weaker discipline, on becoming a top performer in both. And of course, the relative GC rankings rarely change on the flat, rouleur-oriented or sprint stages.

At the end of the day, if GC riders cannot diversify and broaden their skill set, they are unlikely to be a serious grand tour threat. Despite all the media talk about climber-friendly or time trial-friendly courses, recent history shows that one does not win a grand tour by being the top climber or the top time trialist – one must be among the very best in both disciplines.

If this assumption holds true, those who want to contend for the 2020 Tour should stay diversified – the climbers would be wise to bank some major hours on their time trial bikes and the time trial specialists shouldn’t necessarily throw in the towel just because there are only 36km of ITT. It seems quite possible that ultimate victory will be decided or sealed against the clock on Stage 20.