CapoVelo.com
CapoVelo.com - - "The Cyclist Who Went Out in the Cold: Adventures Along the Iron Curtain Trail"
56023
post-template-default,single,single-post,postid-56023,single-format-standard,no_animation

“The Cyclist Who Went Out in the Cold: Adventures Along the Iron Curtain Trail” 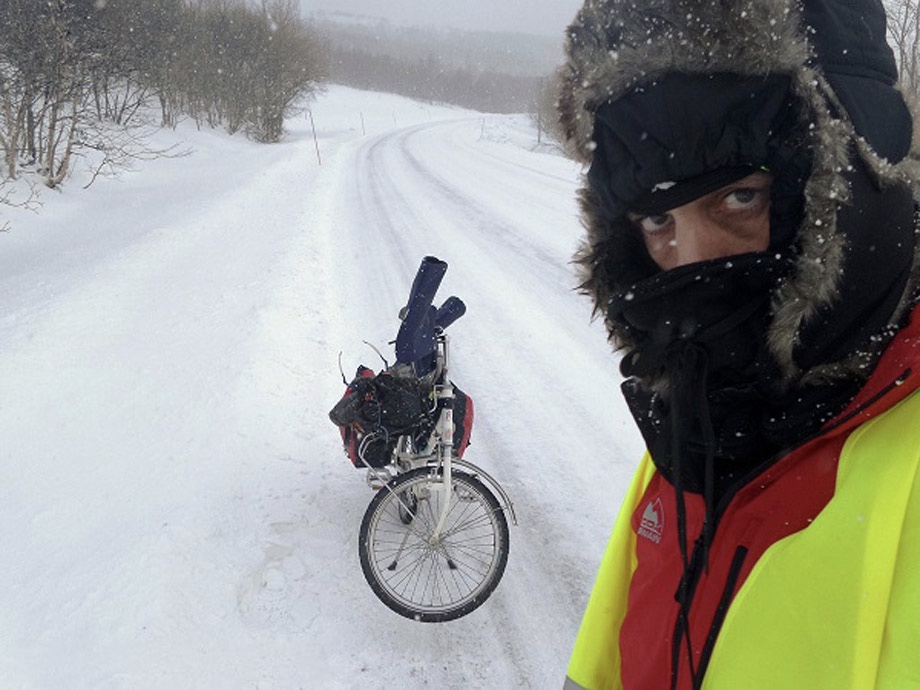 Tim Moore is a British travel writer and humorist with an acute sense of history. He does risky and unexpected things in risky and unexpected ways, and lives to write about them. In one travelogue he retraces the Arctic trip of a stuffy British aristocrat and his long-suffering butler. In another he trudges a medieval pilgrimage route of 466 miles to Spain’s Santiago de Compostela with his belongings on a donkey. He biked the 2,175 miles of the 2000 Tour de France. And a century later, he recreated the disastrously challenging 1914 Tour of Italy — 1,926 miles riding a 99-year-old bike with wooden wheels.

But  Moore outdid himself in his latest adventure, chronicled in his book, “The Cyclist Who Went Out In The Cold.” As a 51-year-old man of uncertain fitness, Moore set out to bike the length of the recently-collapsed Iron Curtain, all 6,213 miles of it. Again he used a bicycle of the period, a MIFA 900 manufactured in East Germany during the 1970s.

He calls his bike the two-wheel version of the Trabant, the East German-made plastic-bodied mini car that was universally derided (as in “Q: Why does a Trabant have a heater in the back? A: To keep your hands warm when you push it.”). The MIFA is a step-through, folding bike designed for shopping with 20-inch wheels and a single speed: slow. It has a front brake that presses a block of rubber against the wheel rim — a system that other bicycle manufacturers phased out before World War I. He transplanted onto the MIFA a two-speed rear hub from a West German bike of the same period. Still, given the very long and challenging trip ahead, the MIFA was still a tool singularly ill-designed for the purpose (to paraphrase Churchill’s quip about golf clubs)

The beginning was challenging. On his March start date Moore was surprised by a heavy snow storm and minus 8 degree Fahrenheit temperatures. He found that biking through snow was like biking through sand, and that places to get food and shelter in Finland were often dozens of miles apart. Biking for days in sub-zero snowy weather through a Finnish landscape devoid of other travelers, human settlements, vegetation, and animals was tough mentally. He had been warned about this: “You probably won’t die,” his wife said the night before he left, “but I do worry that you might go mad.” He makes it safely through and has great things to say about the Finns’ gallant fight against Stalin’s aggression and their unfailing hospitality.

Biking got much easier after Finland: Moore advanced just 6.5 miles in two weeks in Finland, and was clocking 10 miles per hour by the end of the trip. But his mood got darker.

Most of what he writes about the next 13 countries is negative. The roads and the food are mostly horrible, the towns moribund, the officials craven, and the hoteliers sullen. Elderly people look decrepit, people who try to speak English have goofy accents, many seem lazy. The dark, soul-destroying Communist past is discussed at great length. Buildings appear bizarre to him and some of his hotel rooms are lit by just a single ceiling light. Once in a while he notices a beautiful gorge or a beautiful river but he catches himself and quickly returns to criticizing this or that. At times Moore dredges up even more depressing stories from a 1990 car trip to Eastern Europe: Communism had just fallen and things were really bad then.

However, Moore seems to have missed the unique beauty of this part of the world that existed before the Iron Curtain was drawn and after it fell. For example, how could he have missed the fields in bloom at that time of the year, the imposing Baroque buildings of the Habsburg era, the tidy architecture of the Prussian towns, the beautiful Byzantine design of the Orthodox churches or the many delightful local dishes? Most importantly, how could he have missed the revival of people’s spirits and their hopefulness since the dramatic fall of Communism?

Overall, though, the book chronicles a splendid victory: that this Iron Curtain tour could happen at all. Born in 1964, the author calls himself a child of the Cold War and recalls how scared he was of a nuclear attack from behind the Iron Curtain. Moore looks at his recent trip with marvel: “I still could not get my head around the fact that one could now traipse gaily hither and thither across the death-strip.” With the Soviet Empire gone, this cranky man on his funny bike could now travel freely across many borders once forbiddingly closed.

Asking for trouble and getting it, he sets off from the northernmost Norwegian-Russian border at the Arctic winter’s brutal height, bullying his plucky MIFA 900 through the endless and massively sub-zero desolation of snowbound Finland.

Sleeping in bank vaults, imperial palaces and unreconstructed Soviet youth hostels, battling vodka-breathed Russian hostility, Romanian landslides and a diet of dumplings, Moore and his ‘so-small bicycle’ are sustained by the kindness of reindeer farmers and Serbian rock gods, plus a shameful addiction to Magic Man energy drink.

Haunted throughout by the border detritus of watchtowers and rusted razor wire, Moore reflects on the curdling of the Communist dream, and the memories of a Cold War generation reared on the fear of apocalypse — at a time of ratcheting East-West tension.

After three months, 20 countries and a 58-degree jaunt up the centigrade scale, man and bike finally wobble up to a Black Sea beach in Bulgaria, older and wiser, but mainly older.