The Vibe of this Year’s North American Handbuilt Bicycle Show 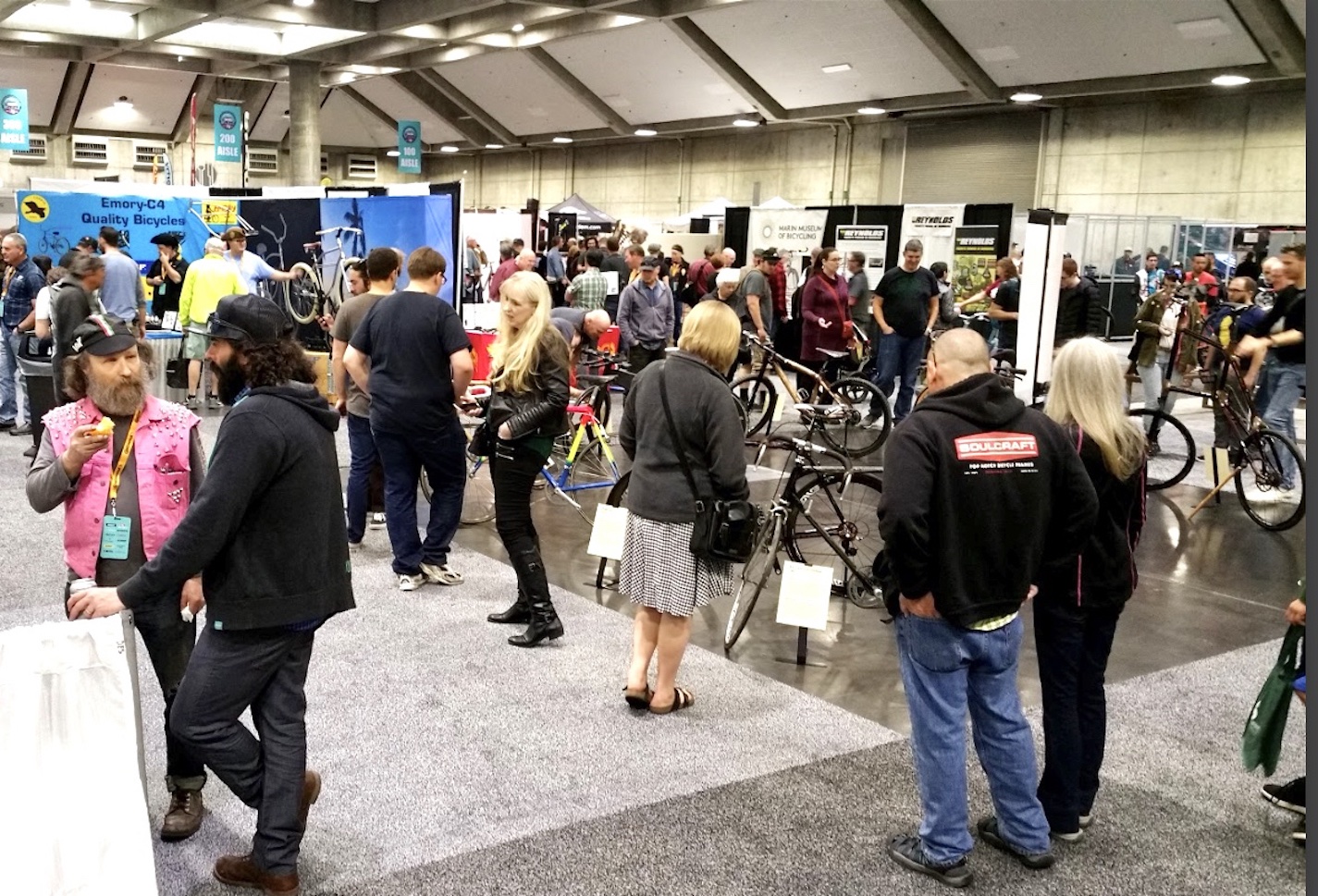 article and images by Juan Montalvo

The cycling world can often feel highly polarizing with its myriad sub genre of riding styles and bicycles; often giving rise to a feeling of being out of place with regard to identity in the cycling community. Road bikes, mountain bikes, gravel bikes, town bikes, cross bikes, all road bikes ad-infinitum: where does one line end and the other begin?

Finding a sense of belonging when there are so many varying avenues in cycling can often be difficult, but events like the North American Handbuilt Bike Show are truly the antidote to ones perceived lack of inclusion. For three consecutive days framebuilders and enthusiasts the world over congregate for the bigger purpose of sharing their mutual affinity for one thing; the bicycle.

Irrespective of frame material, wheel size, tire width, suspension or lack thereof; NAHBS is to cyclists what the Olympics is to athletes: a near religious sacrament.  No bicycle style is forgotten as participants are limited only by their creativity and expressive genius.  From hand filed and polished steel lugs to custom tube-to-tube carbon construction, this year’s show encompassed a darn-near all inclusive umbrella for builders to reside under.

This year’s edition of NAHBS was held in the sunny city of Sacramento, CA.  With the event taking place in the Sacramento Convention Center, participants and attendants were poised for easy access to the venues’ convenient location in the heart of the downtown area.  As the floodgates opened to the public on Friday morning, the show had a certain buzz in the air as people spread far into the reaches of the event while bikes were being moved around, photographed, judged and ogled over by NAHBS staff and volunteers.  For three full days we saw not only the incredible talent of individuals and small teams of frame builders, but offerings from bag, component, tire and accessory manufacturers alike.  The diversification of the show was truly a treat for those who were hoping to experience the full spectrum of what the cycling industry has to offer.

Something for every taste would prove to be on display such as T-Lab with their completely custom-formed, highly ovalized titanium tube sets and consistent tig welds, Favaloro’s elegant, fully convex, carbon topbtube/seatstay transitions, and Grandis with their immaculately finished, classic lugged steel frames.  If one somehow failed to find something that got their eyes wide open and their ears perked up, they may need to consider a new point of interest as NAHBS brought out some of the most artistic in execution, functional in design, traditional in construction and cutting edge in medium.

Thanks to Don Walker and his amazing staff, this years’ show (the 15th to be exact) reined in not only a huge number of builders, but also helped organize a comprehensive list of lectures and clinics. “Demystifying bicycle tubing diameters, and why it matters”, “Bikes for all abilities – opportunities, advocacy & awareness” and “Bike-Cad for frame builders and fit specialists” were a few points on the spectrum of the twenty-two workshops offered.  To help keep the atmosphere buzzing for all three days, the event had an outstanding offering of cold brew and hot coffee courtesy of Verve coffee roasting company.

With a record number of attendants and nearly 210 exhibitors, next years’ 2020 NAHBS in Dallas, Texas is sure to be just as outstanding.  Such an abundance of enthused builders and even more enthused bicycle fanatics renders it rather clear that the custom hand-built bicycle is very much here to stay.