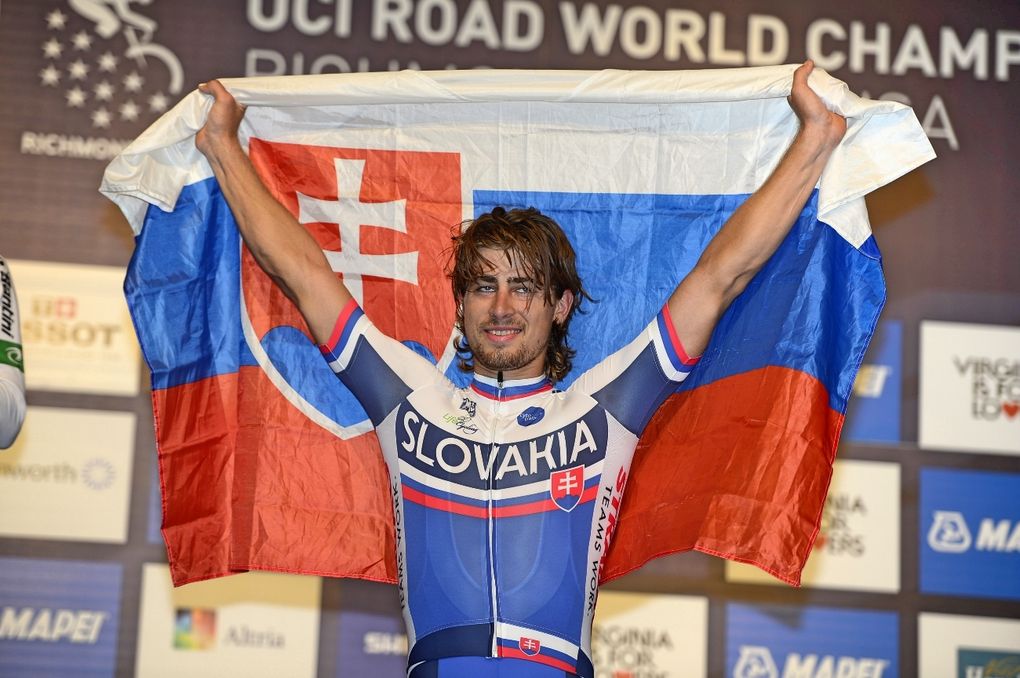 28 Sep 2015
By Gianni Pericolo - In LATEST ARTICLES, THE GREAT RACE

Given his lack of wins, it’s been a rather tense season between Peter Sagan and Tinkoff-Saxo’s team management , but yesterday’s victory in the World Championship road race, seems to have bolstered spirits between the two.

Although Sagan was really representing his country (Slovakia) at the Worlds, Oleg Tinkov and his team couldn’t resist seizing the opportunity to capitalize on their rider’s success.

Peter Sagan asserted his willpower in Richmond, Virginia to convincingly claim the coveted World Championship title and secure Tinkoff-Saxo a historical first Worlds Road Race title. The entire team followed the race with excitement and extends a warm applause to the newly crowned and well-deserved Champ after having witnessed Sagan’s inspiring dedication throughout 2015.

Tinkoff-Saxo’s Team Owner Oleg Tinkov couldn’t be any clearer in his reaction to Peter Sagan’s World Championship win that came just 30 days after having suffered second degree burns at Vuelta a España.

“Peter is the beast! Cycling without him would be different!”, states Oleg Tinkov concisely.

A decisive attack from a superior Peter Sagan on the steep incline of 23rd street saw the Slovak secure a stirring solo win at the 2015 World Championships Road Race. According to Tinkoff-Saxo’s Head Sports Director Steven de Jongh there was no doubt to who was the strongest on the day.

“After a great race, the best rider won! By far the strongest in the last lap! Peter won despite the fact that he had a small team around him. He did his move on the right moment. One moment of hesitation between Hagen and Van Avermeat was enough. We are all very happy for Peter and congratulate him and the Slovakian squad”, says Steven de Jongh.

The World Championship title comes after a season of hard, persistent work. Tinkoff-Saxo first witnessed Sagan’s resolve on the slopes of Kilimanjaro, where he insisted on carrying his luggage all the way instead of leaving it to the local porters. Throughout 2015, Peter Sagan has battled adversity yet come out on top on multiple and memorable occasions such as in his overall Tour of California win and in pulling on the green jersey at Tour de France.

Tinkoff-Saxo sees yesterday’s win, which Sagan himself proclaims to be the biggest of his career, as an ideal near conclusion to the season – and an exciting start to 2016. For Tinkoff-Saxo’s General Manager Stefano Feltrin, Peter Sagan will become an ideal ambassador for the sport by wearing the rainbow jersey in his final appearances of the season such as the inaugural Abu Dhabi Tour in October.

“Simply a terrific victory after a very tactical race. It is going to be a great honor to have the rainbow jersey in our team. At Tinkoff-Saxo we will all do our outmost best to help Peter reach other great victories wearing this very special jersey. He is certainly going to be a great ambassador for cycling and friendship between people wearing his rainbow jersey – he already is and these colors just underline what a true champion he is”, concludes Stefano Feltrin.