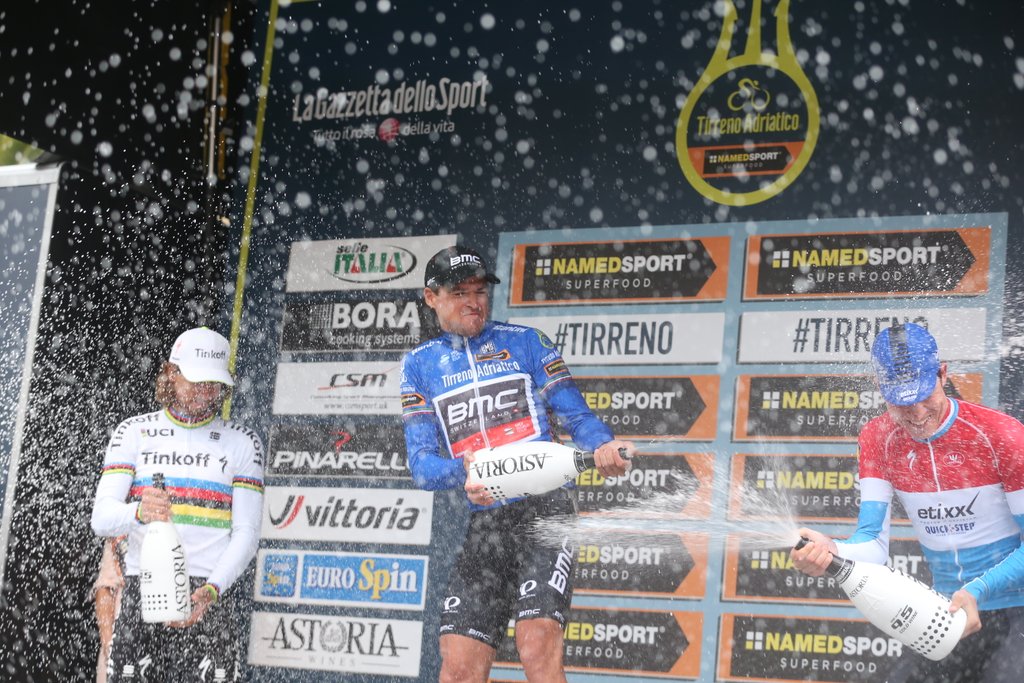 Fabian Cancellara crushed the final time-trial event at the Tirreno-Adriatico today, powering his way along the flat 10.1-kilometer course in a time of 11:08 (54.4km/h) – grabbing his fourth victory in six years.

Cancellara won the stage seven race against the clock in 2011 and 2012, finished second in 2014, and obliterated his winning time in 2015 by a full 15 seconds today, dominating the short time trial that concluded the week long.

“It was windy fast, short and, yeah, it felt good,” said Cancellara, clearly enjoying some of his best form in a few years. “I mean it was very hard; it may have seemed easy, but it was not.”

“I didn’t do anything specific today, with such a short time trial I focused on pure power. I did not have the easiest week, and I am really happy with my performance. I went out like a mad man, with everything I had.”

Cancellara set the fastest split time by nine seconds, and by the finish he added a few more for good measure, crossing the line 13 seconds ahead of second place Johan Le Bon (FDJ), and 15 seconds ahead of top rival Tony Martin (Etixx-Quick Step).

None of the riders to follow, including the final starters in the fierce battle of the general classification, would better the times of the top three early finishers.

“On one side of the course you enjoy to go 60km/h, but on the other side you have to really push the pedals, and it’s painful,” explained Cancellara about the non-technical, flat parcours. “The speed bumps on the way out you hit at 60km/h and with the wind and cobblestones, you have to be careful and find the right line. They are not that fun.

“The last two kilometers look flat, but especially from kilometer two to one, it feels a little bit uphill, around 0.5 to almost 1 percent gradient and that makes it really hard. The last kilometer is endless long; there it’s hard for the head, and you have to push a lot.

“When I saw 1k to go my legs felt already empty, full of lactic acid, everywhere, almost out of your ears. You have to give all-in, all that you have, until the end because the finish line is what counts; there you can stop breathing and stop thinking.”

While the stage win was a fight between the time trial specialists, the final riders went to war in a separate battle for the overall victory.

This is about the clock, about who goes the fastest, so you have to find a way to go on a level where you are normally not riding. It’s an over-limit race.

Bauke Mollema gave a strong performance in the time trial to finish in a time of 11:48 to move him from 12th to 9th place in the general classification.

“I did all I could. It’s a good day for the team, we won with Fabian and I finished in the top 10 and that was the maximum result we could do for this week,” said Mollema. “Of course, I did not come here for 9th place, but looking at the circumstances and the cancellation of the mountain stage, I have to be satisfied with this, I could not do more.

“I think my level is good, I had a good week, but it’s a strange scenario for me: I am going home with a feeling that it never really started because we never had any real climb. That is a pity, but that’s cycling, we cannot control the weather.”

The GC war ended in one of the closest finishes possible: Greg Van Avermaet squeezed out the overall win by one second, crossing the line seven seconds slower than Peter Sagan (Tinkoff) to clinch the blue leader’s jersey.

“We are super happy that Fabian won the TT today, but more so with how he won with such a big difference – his form is super,” said director Dirk Demol. “On the other side we did not get to play for the overall for Bauke, it’s fully understandable we could not race the mountain stage, it was not possible, but it is regrettable. When we see the time trial that he did today we could be top five or more, so it is a little disappointing. But now onward to Milan-Sanremo and the Flemish Classics, especially Flanders and Roubaix.”