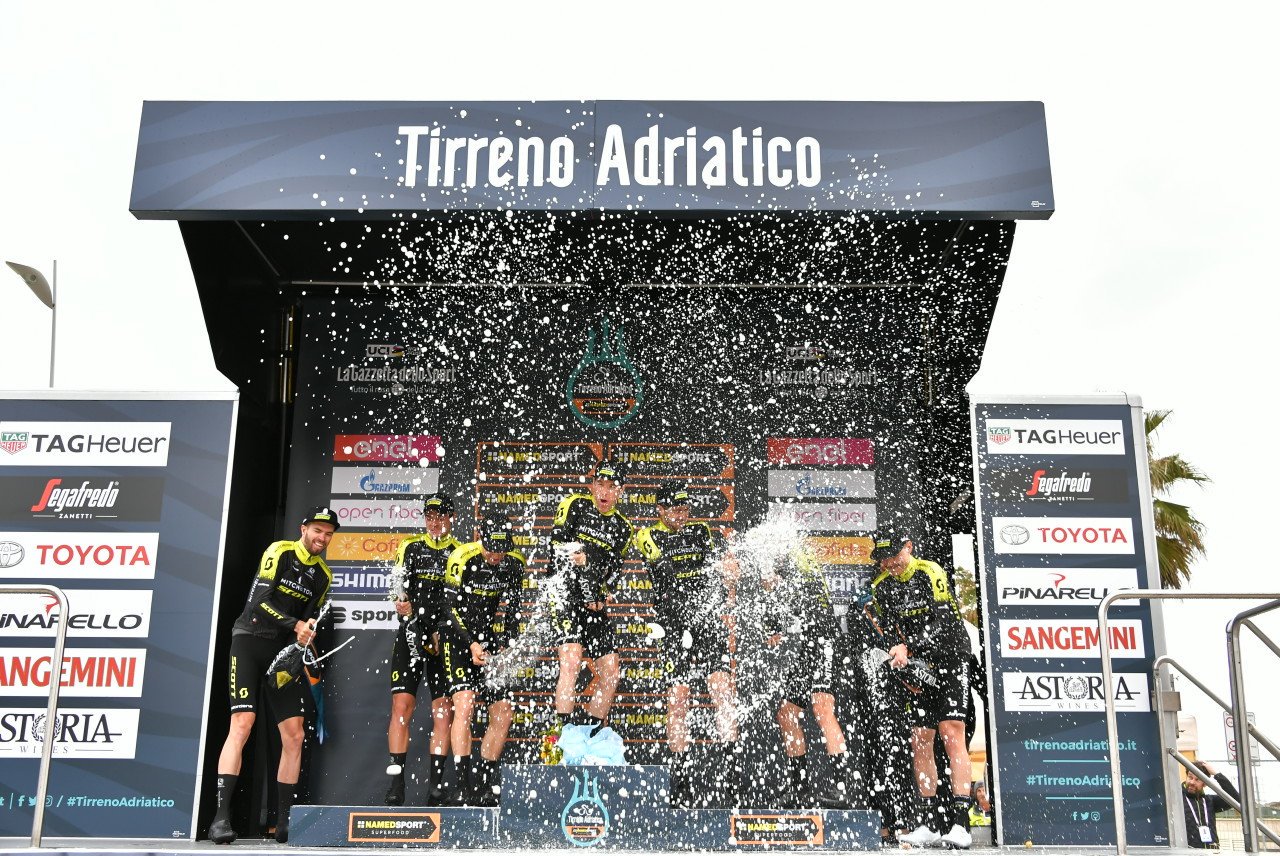 Mitchelton-SCOTT powered their way to victory in the opening team time trial of Tirreno-Adriatico today, taking the stage by an impressive seven seconds in Lido di Camaiore.

Despite being the last team off the start ramp, the seven-man squad didn’t let the pressure get to them, setting the second fastest time at the intermediate split before upping the pace and taking the win.

Australian Michael Hepburn was the first rider to cross the line and will line-up on the start in Camaiore for stage two in the leader’s jersey.

The opening stage got underway in rainy conditions, making the relatively straightforward 21.5km course more technical, with a slippery road surface to contend for the teams setting off early.

As the last team off the start ramp, Mitchelton-SCOTT had to deal with mixed conditions with the sun having dried some sections of the course, while others remained wet.

It was a strong start with Australian time trial champion Luke Durbridge putting in some big turns on the front as the squad passed the time check just two seconds down on the fastest time set by Team Jumbo-Visma.

There were some nervous faces in the hot seat as it became obvious that Mitchelton-SCOTT were on a fast one with five riders still taking their turns on the front.

Disaster almost struck heading onto the finish straight when a member of the public strayed onto the course and the team had to take avoiding action, narrowly missing the woman and her dog.

With a short run to the line the squad regrouped and powered over the line to take the day by seven-seconds and start the week of racing in perfect fashion.

“Team trials are very technical these days and it’s something our team enjoys doing, especially myself,” said Hepburn.

“Tirreno is one of my favorite races of the year, I always seem to be in good condition here, but to be completely honest, I don’t deserve the jersey more than anyone else in the squad, that was just the order we were coming into the home straight.”

“It was a good little advantage for us being last off, knowing the times and also with the weather, the road dried up a little bit.”

“We’ve been here before and gone off early and the wind changes, but finally this year we had a bit of luck on our side.”

“We were quietly confident in our team, we have a lot of big boys, a lot of powerful time trialists and today was one of our chances to get some time and we did that.”

“Super start! We’ve been trying to win a TTT for a long time, I think I’ve been here four or five years now and every time we try, every year we bring a super strong team and we’ve been close and now we’ve finally got it!,” said Adam Yates.

“Tonight we’ll look at the standings and work out where we are, it’s going to be tough, there’s no big, super hard mountain stages this year, but we’ll see and just take it stage by stage.”

Meanwhile, Jumbo-Visma finished seven-seconds behind the Australian squad, followed by Team Sunwb a further eight-seconds back.