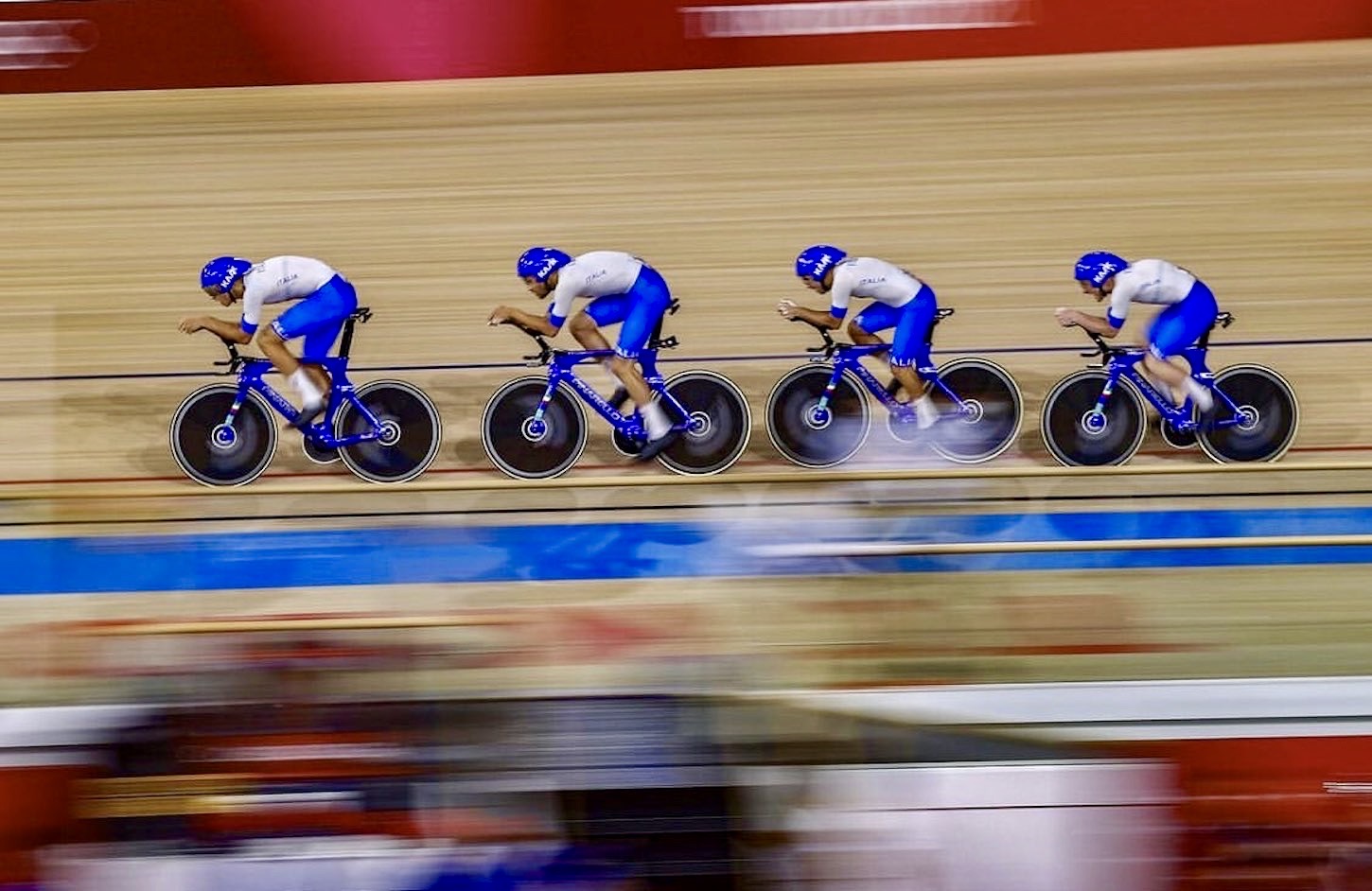 The second day of track cycling at the Olympic Games in Tokyo saw Germany take gold in the women’s team pursuit and the Netherlands dominate the men’s team sprint. In addition, many Olympic and world records were beaten in the Izu velodrome.

Franziska Brausse, Lisa Brennauer, Lisa Klein and Mieke Kroeger had to set a new world record to overthrow Team GB from the top spot in the women’s team pursuit. “It’s just a harmony, we’re pretty good at it,” Klein observed after the German quartet achieved massive improvements in the years leading to Tokyo 2020. “When it works, it’s like being on rails.”

“Damn, this is so beautiful”, said Roy van den Berg moments after bringing the Netherlands their first gold medal in a men’s track event at the Olympic Games since 1932. Van den Berg participated in all the rounds of the men’s team sprint, first with Harrie Lavreysen and Matthijs Büchli, before Jeffrey Hoogland replaced Büchli. The Dutchmen dominated Team GB in the final.

Early bangs came with the opening event of the day, the first round of the women’s team pursuit. The German quartet had already set a new world record (4’07’’307) on Monday, but it lasted barely 24 hours.

With the 3rd heat pitching Great Britain against Team USA, the Izu velodrome was already on fire, and so were the riders. The Americans came very close to the new world record: 4’07’’562. But Team GB were flying at a higher pace on the track: 4’06’’748!

How long would that reference stand? Barely a few minutes, as Germany dominated heat 4 with a time of 4’06’’159! The stage was set for a thrilling battle for gold against Great Britain, while the USA would face Canada in the final for bronze.

The hierarchy was clearly settled when the Germans powered to gold and another world record (4’04’’242) to beat Team GB (Katie Archibald, Laura Kenny, Neah Evans and Josie Knight). The British team’s silver medal ended their domination of the team pursuit at the London 2012 and Rio 2016 Olympic Games.

The powerful stars of the men’s team sprint also showed right from the beginning of Tuesday’s session they were ready to light fireworks at Tokyo 2020. In the qualifying, Australia already beat the Olympic record (42’’371), only to see the Netherlands smash their time (42’’134) moments later. Team GB, led by the icon Jason Kenny, then squeezed in between with a time of 42’’231.

Intensity rose with the first round when the Australians beat the Olympic record, again (42’’103)! This time, it was Team GB who beat that record in the following heat: 41’’829. But the Netherlands went even faster – 41’’431 – earning their place against Great Britain in the final for gold, while Australia were to face France for bronze.

The Australian run of Olympic records stopped at the most crucial moment, while France (Florian Grengbo, Sébastien Vigier and Rayan Helal) powered to bronze, their first medal in the cycling events of Tokyo 2020. Moments later, the Oranje trio set a new and final Olympic record (41’’369) to win gold from Team GB (Ryan Owens, Jack Carlin and Jason Kenny), who had to settle for silver.

Men’s team pursuit: another world record for Ganna and Italy

Deprived of the opportunity to chase gold in the men’s team pursuit after Monday’s qualifying, the Australian quartet showed their worth and their willingness to take bronze as they beat the Olympic record set by the Danes the previous day: 3’44’’902.

But that was just an appetiser ahead of a fierce high speed battle between Italy and New Zealand. The Kiwis were in the lead position until Filippo Ganna put in a massive turn at the front to power the Squadra Azzurra (with Simone Consonni, Francesco Lamon and Jonathan Milan) to the world record: 3’42’’307, more than 2 seconds faster than the time set by Denmark in last year’s UCI Track Cycling World Championships!

In the final heat, the Danes were flying too until Frederik Madsen didn’t notice he was catching up to Great Britain’s Charlie Tanfield and crashed into him. The two riders hit the deck and the Commissaires ruled that the Danes would face Italy for gold while Australia and New Zealand will battle for bronze.

The finals of the men’s team pursuit will be held on Wednesday. The third day of competition in the Tokyo 2020 velodrome will also include the first rounds of the men’s individual sprint and the women’s keirin, featuring the Japanese star Yuka Kobayashi.