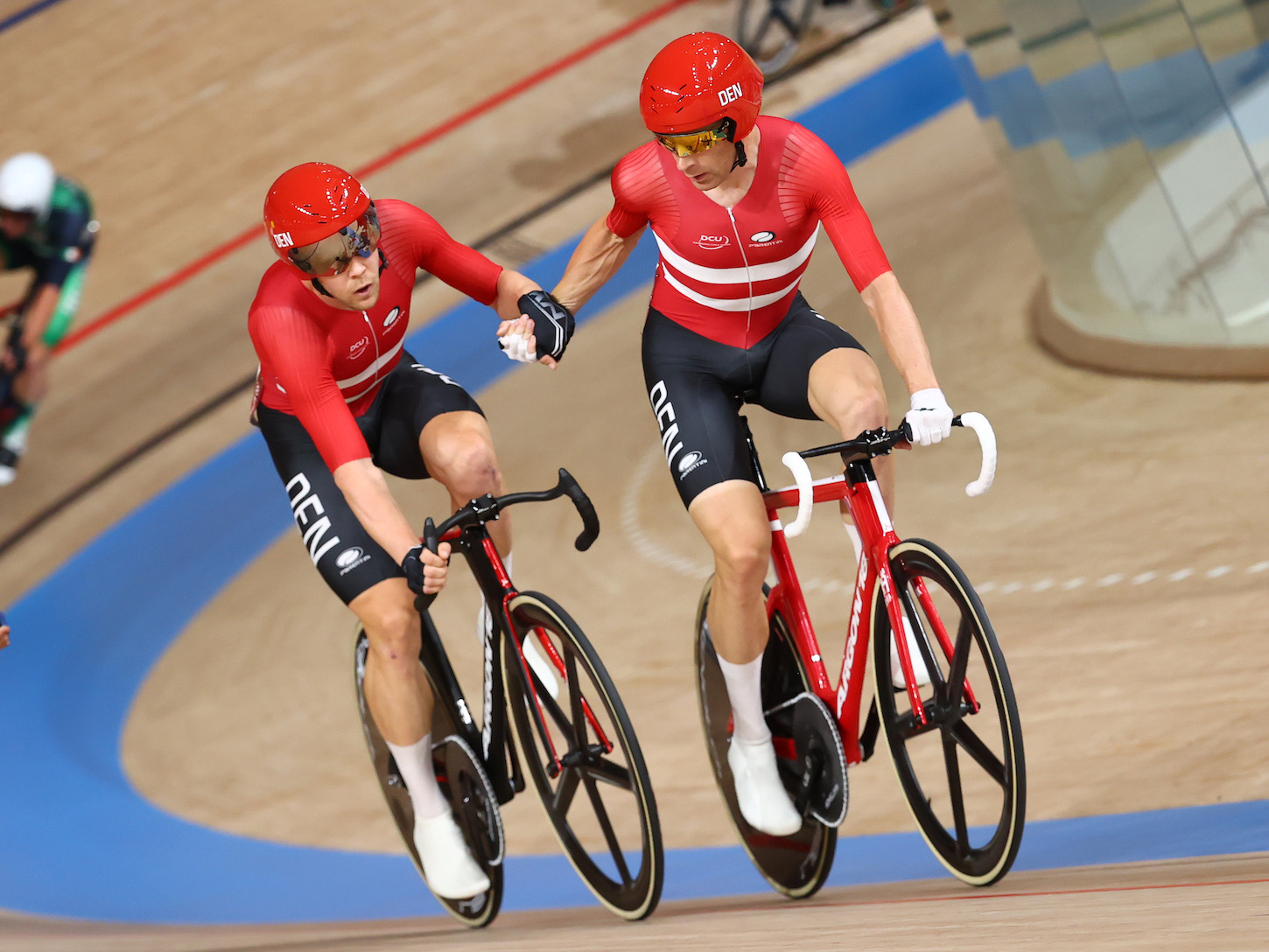 The men’s Madison provided a thrilling battle as the main event of Saturday, the sixth day of action in the Izu velodrome, while the sprinters battled their way through the first rounds of the women’s sprint and the men’s keirin on the eve of the final day of competition at the Olympic Games.

After 200 laps, Lasse Norman Hansen and Michael Morkov shouted their happiness before tears rolled down their cheeks as they had won gold in the Madison, 13 years after the event’s last appearance at the Olympic Games, in Beijing 2008

Morkov was right in the heart of that event in Beijing, where he was 6th in the Madison and a silver medallist in the team pursuit. He also raced in Pruszkow in 2009, becoming the UCI Madison World Champion alongside Alex Rasmussen, a feat he repeated last year in Berlin with Hansen. They are the new golden duo who now reign over Mount Olympus!

The Danes took it relatively easy in the first part of the race, scoring 6 points across the first five sprints. But they steadily rose to the top of the standings, riding consistently in the front positions. At the halfway point, Morkov and Hansen were second with 19 points, trailing just 1 point behind Great Britain’s Ethan Hayter and Matthew Walls (winner of the Omnium on Thursday).

The French duo of Benjamin Thomas and Donavan Grondin dominated sprints 11, 12 and 13 to take the lead. But the Danes replied to take the lead with 30 laps to go. Then they covered their rivals’ attacks to secure victory (43 points) ahead of Great Britain (40 points), who narrowly edged France (also on 40 points) thanks to the 10 points awarded in the final sprint.

Women’s sprint: big names out of the equation

The action had already reached high levels with the first races of the day, the 1/8 finals of the women’s sprint, featuring an explosive duel between Tianshi Zhong, gold medallist in the women’s team sprint, and the German Emma Hinze, who took silver. This time, Hinze got the best of her rival, and her compatriot Lea Sophie Friedrich also dominated her heat. Zhong was eventually eliminated in the repechages, along with New Zealand’s Ellesse Andrews, France’s Mathilde Gros and ROC’s Anastasiia Voinova.

Kelsey Mitchell was the first rider to qualify for Sunday’s semi-finals, swiftly dominating her fellow Canadian Lauriane Genest as the format moved to a ‘best of three races’ in the quarter-finals. Hinze soon followed her example, beating Shanne Braspennincx (NED, winner of the keirin), and so did Hong Kong’s Wai Sze Lee, beating Katy Marchant (GBR).

It was a tighter duel between Friedrich and Olena Starikova. The Ukrainian sprinter won the first race by 0.001s. The German gold medallist (team sprint) survived the second battle but Starikova eventually powered to the semi-finals as she won the third race.

The first round of the men’s keirin also provided early fireworks in the Izu velodrome. Rayan Helal (FRA) and Maximilian Levy (GER) finished first and second in the first heat, meaning the reigning Olympic Champion Jason Kenny (GBR) would go through the repechages. Dominant in the team and individual sprints, the reigning UCI World Champion of the keirin, Harrie Lavreysen (NED), suffered the same fate in the fourth heat, won by the Japanese Yudai Nitta. His compatriot Yuta Wakimoto won the 5th and final heat to delight the local fans.

These sprinters will resume their battle on Sunday and one of them will eventually surge to glory on the Japanese track, in the country that shaped keirin. The final day of competition at Tokyo 2020 will also feature the final rounds of the women’s sprint and the four events of the women’s Omnium (Scratch Race, tempo race, Elimination and points race). The final fireworks are coming!