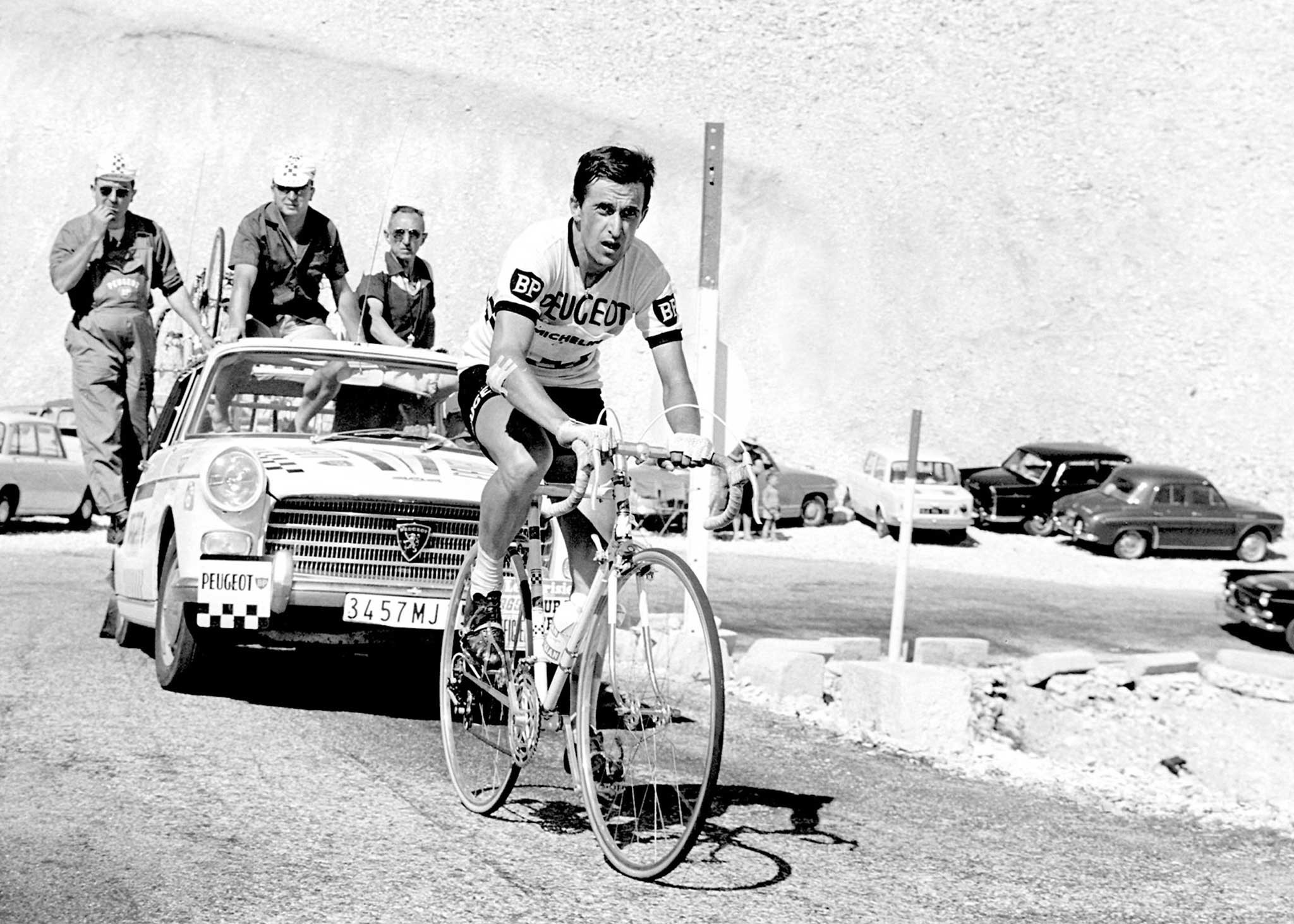 01 Sep 2015
By Campionissimo - In LATEST ARTICLES, THE PODIUM

To celebrate the 50th anniversary of Tommy Simpson winning the 1965 world road race championships, the British rider has once again, been immortalized by Rapha, with a special edition jersey and  cap.

The design of the jersey is punctuated by the style of Great Britain’s team kit of the 1960s, along with Simpsonissimo, a headline taken from Miroir Sport, to regale Simpson’s World Championship victory.

Additionally, the red stitching is homage to Simpson’s combative riding style, along with bespoke graphics that symbolize his mining heritage, while the inner collar that contains the quote:: “A glorious mix of courage and cunning.”

The jersey is based on Rapha’s Aero cut, featuring skintight, high-stretch fabric, which is treated with the brand’s Coldblack technology.

According to Rapha, proceeds from sales will be donated to Simpson’s family, for their work to maintain the Tommy Simpson memorial on Mont Ventoux.

Few cycling lives are as well documented as that of Tom Simpson. His career has been pored over and celebrated in articles, books and television documentaries, and honoured with a memorial on the roadside at Mont Ventoux. It can be easy to forget just how groundbreaking he and his peers were – those young Anglophone interlopers made their way into a staunchly continental sport that was, and in many ways still is, acutely ­conscious of its traditions and history.

Simpson’s predecessors were mostly rough-and-tumble track racers such as Reg Harris, who drove a tank in World War Two, and Cyril Cartwright, who supplemented his winnings with shifts as a miner. These riders were bruisers who spent part of the season­ racing grass-track and trained for decidedly Home Nations events like the ­quarter-mile time trial, a far cry from the World Championship stripes that Simpson would earn in 1965.

The heritage of British cycling helped form Simpson and his fellow mid-century professionals like Barry Hoban and Brian Robinson, but they quickly moved on from British competition and turned their attention to beating the Europeans at their own game. This meant excelling in the Classics, on the cols and in the Grand Tours, mastering the finesse of road racing. Simpson did all this and more, building an impressive palmarès and winning over legions of fans both at home and abroad with his unique mix of brutal attacking and gentlemanly manners. Within a couple of years of his move to France, Simpson had more than done his bit to prove British riders did not have to be ­idiosyncratic time trialists.

To mark the 50th anniversary of Simpson’s pioneering World Championship victory, Rapha has produced the special edition Tom Simpson Jersey, which takes its design cues from key elements of Simpson’s life and career. Simpson was a kit fanatic – making his own saddles out of leather cut from his wife’s handbag and sourcing rare components that he kept ­hidden from team-mates and adversaries – and the Simpson ­capsule ­collection of jersey and cotton cap pays ­tribute to this.

LE GENTILHOMME
Simpson courted the image of the English gentleman and played on the stereotype popularised by the best-selling French children’s book Les Carnets du Major Thompson, in which a staid former major struggles to adapt to Parisian life.
Simpson posed for photos with a top hat and teapot to hand but the image was reinforced by his attitude, earning him many friends in the ­peloton and press. But this etiquette did not diminish the ferocity of his attacks, do-or-die affairs that could win him a race or land him in a ditch.

A WORLD CHAMPION’S STRIPES
Simpson’s rainbow stripes, echoed on the jersey, were earned in San Sebastián with the help of a team who worked tirelessly for him. Barry Hoban, Alan Ramsbottom and Simpson’s close friend Vic Denson exhibited teamwork and tactical nous that put the Italians and Germans to shame.

Simpson goaded Rudi Altig into working with him in the race-winning­ move, shouting: “Come on, Rudi, remember the Baracchi!” – a two-man time trial the pair had raced in two years before. In the Baracchi, Altig had almost ridden Simpson off his wheel with a ferocious pace.

LE PRIX DE LA COMBATIVITÉ
“His body ached, his legs grew tired, but still he would not give in,” recalled Tom’s brother, Harry, when asked to describe Tom’s character. The red dossard of the combativity prize had not yet been invented, but Simpson’s fearless style of racing attracted countless admirers and is reflected in the jersey’s red cuff and neck details. Many of his famous ­victories came from audacious attacks that no one dared follow, and Simpson racked up plenty of kilometres alone at the head of races. “Tom Le Plus Fort” ran one French headline of the day, and appears on the back of the jersey. “Simpsonissimo”, the adjective coined by Italian fans, appears on the jersey’s chest.

SIMPSON AND RAPHA
St. Raphaël, the Alsace-based maker of aperitifs, lent its name to two professional racing teams and Simpson raced for both. He was only 21 when he signed for St. Raphaël-­Géminiani, earning his spot with impressive results in Brittany’s amateur races. The next year he advanced to the highly regarded Rapha-Gitane-Dunlop team, rewarding­ the management’s decision to promote him with victory at the 1961 Tour of Flanders. The St. Raphaël-sponsored teams epitomised the early-’60s peloton style, with well turned-out racers wearing understated, elegant kits. Other team sponsors who featured in Simpson’s career included British Petroleum, whose shield appears on the jersey’s sleeve around Simpson’s initials.

THE BLUE AND THE RED
The colours of British cycling did not change for decades – the blue-and-red jerseys of the postwar era remained largely unaltered until the early ’90s – meaning generations of riders were united by a stylistic link. Simpson’s national kit was made from lightweight wools with block-dyed colours, high collars and quarter-length zips. The Simpson Jersey has been brought up to date with the use of a lightweight and high-wicking technical fabric, its tailoring informed by thousands of hours of testing in the pro peloton.