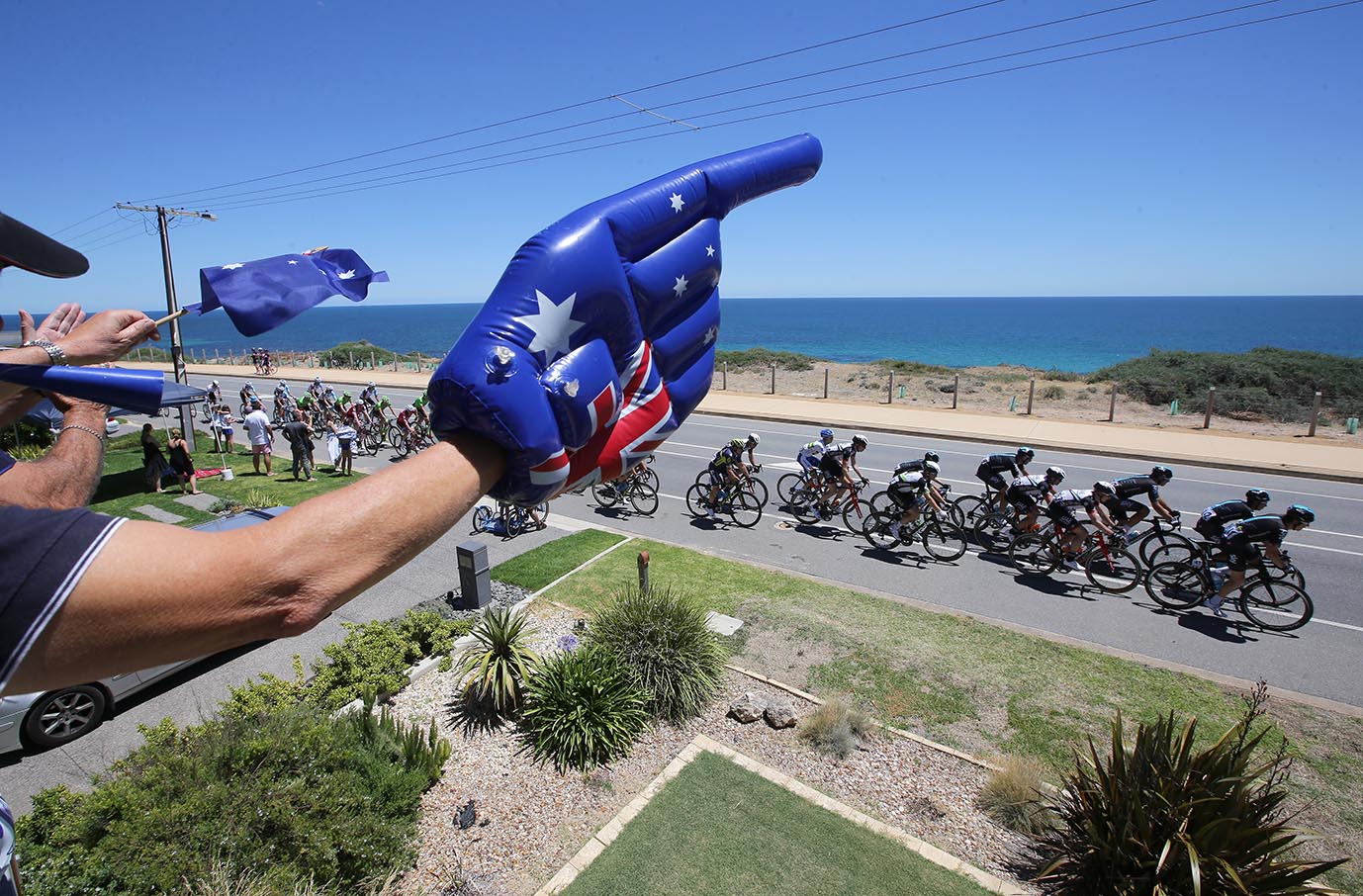 On a day the climbers came out to play Australian Richie Porte showed them how it’s done claiming his fourth straight win on Willunga Hill and locking up his first Santos Tour Down Under crown.

In a precisely timed attack the overnight race leader executed what has become his signature jump to soften up the opposition on the final ascent of BikeExchange Stage 5. It did the job because when he pounced again his rivals could do little more than watch him ride away.

Although Porte began the day saying the stage win was not his priority there was no doubt that, as the form climber in the race, he was favourite to be first over the line after the 151 kilometer race through the vineyards and coastal holiday beaches of the McLaren Vale wine growing region.

Of the 125 thousand fans who flocked to the stage many set up in their preferred viewing position hours in advance and thousands took advantage of the glorious weather to ride from point to point on the course.

But it is the ascent of Willunga Hill that attracts the diehard fans who clamber for the best view and weren’t disappointed.

“I’ll tell you what, that hurt more than the other three that I’ve rode up here,” said Porte after crossing the line alone, in a time of 3:40.13, 20 seconds ahead of Nathan Haas (Dimension Data) who pipped Colombian Esteban Chaves (ORICA-SCOTT) in the sprint for second place. “I went from quite a long way out and it’s just incredible team work today and I’m just happy to finish it off for the guys.”

“That street circuit in Adelaide it’s not easy (and) anything can happen there,” said Porte who extended his lead from 20 seconds to 48 seconds. “I’m happy with where I am at the moment. I’ve put some good time into the other guys and you know I think it will make tomorrow feel a little bit more relaxed for us.”

The performance of Porte this week is a confidence boost after his 2016 season came to a premature end when he crashed during the road race at the Rio Olympic Games and fractured his shoulder blade. However he has made the most of his time off the bike and trained well for this week’s return to racing.

“This is not an easy climb so to win it… it’s great for morale,” said Porte. “Obviously for me the biggest goal this year is July (and the) Tour de France but things are going well.”

The effort of Haas to lead the best of the rest across the line moved him up to third overall while Chaves has moved up to second.

“It was very hard today, but it was also very beautiful,” said Chaves whose popularity is evidenced by his growing legion of Australian fans. “It was like the Tour de France on the climb. It is so nice to hear people yelling your name.”

“We tried to split the bunch at the bottom with Sky, but that was not possible,” said Chaves of the pace set in the approach to the final climb. “When Richie attacked the first time, I could go with him. On the second attack, it was too hard, and I could not follow.”

“I am second and I am very happy with the start of the season,” said Chaves who was promoted one place in part due to misfortune for Gorka Izaguirre.

The Spaniard from the Movistar team started the day ranked second but was still suffering the effects of his crash on the stage into Victor Harbor.

“The pain from my injuries finally caught up with me,” said Izaguirre. “I made it OK through yesterday but that was not a hard stage and I knew after the first passage up Willunga that it would not be easy.”

“I tried to hang out, but when the attacks came, it was too much.”

He struggled to stay in touch on the final climb finishing almost two minutes behind Porte and effectively surrendering his place on the podium.

“It’s a shame to lose the podium, but that is bike racing,” he said.

“I cannot believe what I’ve just done,” said an thrilled Haas. “I wanted to see if I could go with the first acceleration because it was a headwind. I thought I made a big mistake by letting myself explode.”

“I am so proud of what me and my team did today. I race until the straps come off and second is better than third,” said Haas. “Hat’s off to Richie (Porte), because what he did today was so impressive.”

In the meantime McCarthy was ruing his bad luck.

“Someone swung out, and took out my front wheel, and I had to unclip,” said McCarthy. “It was the worst-possible place for that to happen and I had to almost come to a complete stop.”

“It took me awhile to get going again and I could not follow the first attacks,” he explained. “I really fought back and I almost caught (fourth placed Diego) Ulissi at the line (but) I had to fight with everything I had to come back.”

“It’s a shame not to have had a clean run on the climb,” he said. “The legs are good and I owe it to my team to keep racing tomorrow for the time bonuses. It’s not like the final stage of the Tour de France. We will keep fighting.”

Earlier in the day as the race director dropped the flag to signal a start to racing Julien Berard (AG2R La Mondiale) and Will Clarke (Cannondale-Drapac) launched the first attack of the day and were soon joined by Jacques Janse Van Rensburg (Dimension Data) and Arnaud Courteille (FDJ).

The quartet set off at a good pace and by the time they contested the first of the two iiNet Intermediate Sprints of the day at Snapper Point (63km) they had established a handy lead.

Maison edged Clarke for top points with De Gendt third. Fifty kilometers later it was De Gendt who picked up the maximum bonus ahead of Bauer and Clarke.

The leaders hit the bottom of the Willunga climb for the first time with a gap of 2:30 to the peloton that had been riding tempo to keep them close enough to catch when the time came.

De Gendt had started the stage wearing the polka dot jersey of Subaru King of the Mountain because he was sitting second behind Porte for climbing honours and Porte was sporting the Santos Ochre Leaders livery.

In a bid to pull clear of Porte the Belgian wanted to score the maximum points over the summit at Willunga and he did that with Bauer second and Maison third.

But any hopes the leaders had of a stage celebration were soon dashed as Team SKY and ORICA-SCOTT combined forces to try and split the field and hunt down the escapees. They made the catch five kilometers from the mountain top finish line.