Tour Down Under 2018 People’s Choice Classic 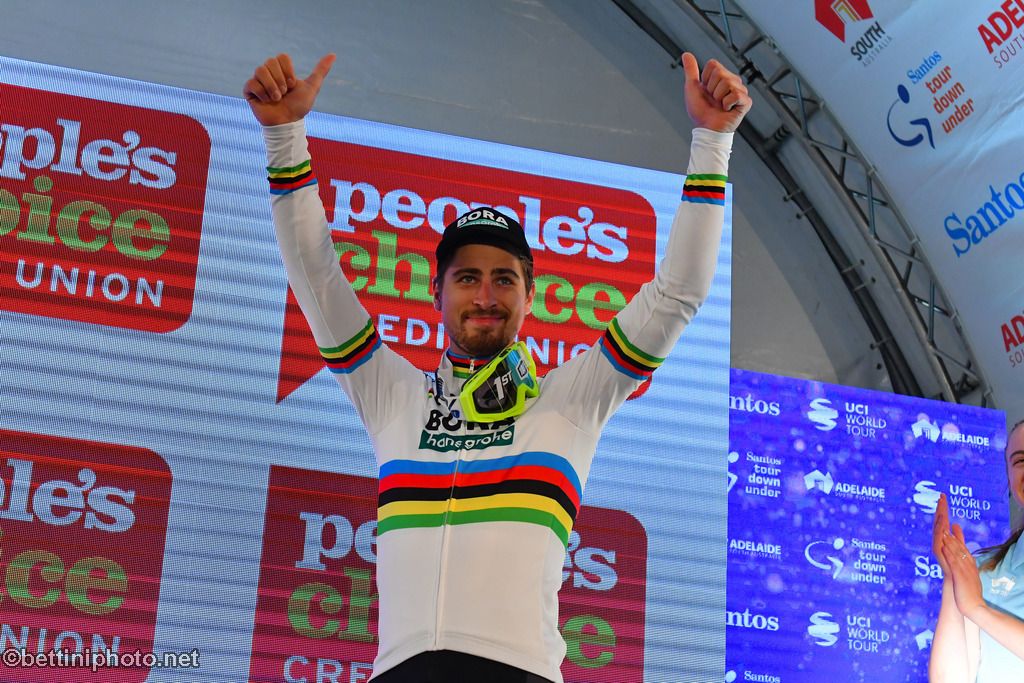 photo credits @ Town Down Under

It was a sprint to the line between the peloton’s top riders during the opening race of this year’s Santos Tour Down Under, which saw reigning World Road Champion Peter Sagan seize the victory to kickstart the 20th edition of Australia’s highest ranked event.

Twelve-deep in the peloton as it veered left onto Hutt Street, Sagan saw his bunch-leading BORA-teammates had gone, in his mind, too early.

With former People’s Choice Classic winner Caleb Ewan (Mitchelton-SCOTT) pushing ahead and two-time Santos TDU champion André Greipel (Lotto Soudal) pushing hard at the front, Sagan burst through the front of the pack to win by over a wheel from the German, with Ewan finishing third.

Although the People’s Choice Classic is a non-points race, Sagan’s win was the first time that a rainbow-jersey holder has crossed the line first at the Santos Tour Down Under.

Sagan will ride for teammates Jay McCarthy and Sam Bennett in the Tour, but he relished the first-up win on Sunday night.

“I was well positioned ahead of the sprint but some guys came from behind and closed me in a little bit, I didn’t expect I could win today but at the end it went very well,” Sagan said.

“My team mates were a little bit too early at the front but it looks like a good week ahead. My condition is good.”

“I’m very happy for my team. It’s a very good start of the season, I thank all the people who turned up today!”

That group worked hard on securing the intermediate primes, which went the way of Boaro (Santos Prime 1) and Narval (Subaru Prime 2 and southaustralia.com Prime 3).

The breakaway maintained a solid lead over the peloton up until the second prime, when the main group began to close in within 20 seconds by the three-quarter mark of the race and had absorbed the frontrunners by lap 18.

Lead of the peloton changed hands between Sunweb, Astana, and Quickstep as it made its way through the streets for the #seesouthaustralia prime on lap 20 (claimed by Jay McCarthy, BORA-hansgrohe).