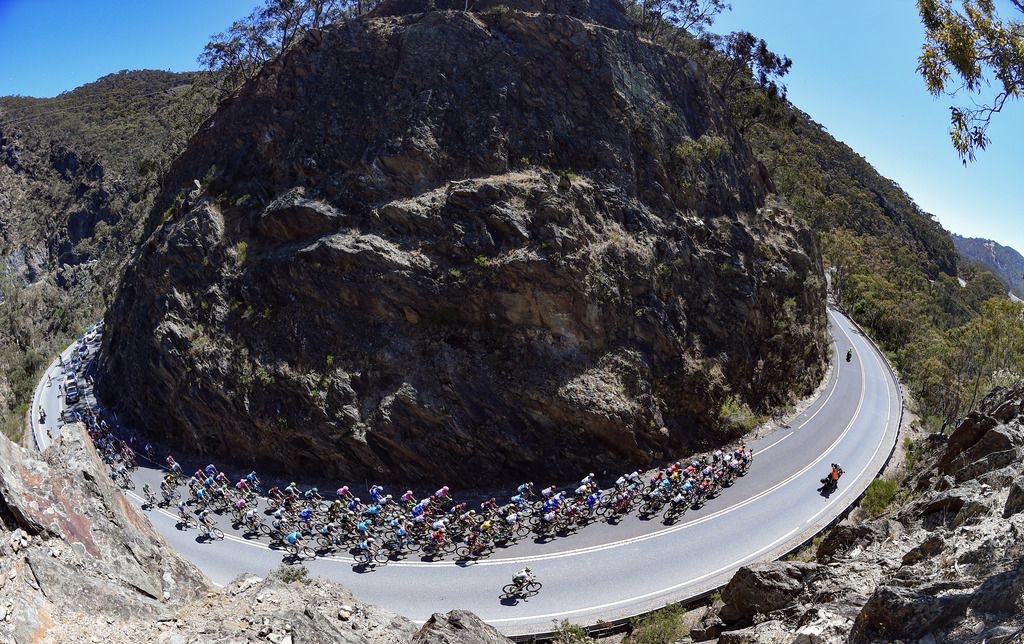 “Cycling is a funny sport. Things can happen,” said South African Daryl Impey with heavy understatement after taking the overall lead of the Santos Tour Down Under on Saturday.

Albeit, Impey (Mitchelton-Scott) was talking with caution about his odds of defending the Santos Ochre Leader’s jersey in Sunday’s final Be Safe Be Seen Mac Stage 6 in Adelaide.

“I can’t count my chickens before they hatch.”

However, while the 33-year-old South African is in the box seat to finish the job. His ‘funny’ comment could well have defined how Saturday’s 151.5km Stage 5 from McLaren Vale to the summit of Willunga Hill unravelled – and to his favor.

The stage was won brilliantly by Tasmanian Richie Porte (BMC), his win being his fifth in a row on the iconic climb.

Porte attacked the lead group with 1.5km to go on the 3.5km climb to the finish, and then again with 1km left to discard the one rider who could follow his move – Queenslander Jay McCarthy (Bora-Hansgrohe) – who was another overall threat.

Porte, the defending Santos Tour Down Under champion, crossed the finish eight seconds ahead of a fast finishing Impey and 10 clear of Dutchman Tom-Jelte Slagter (Team Dimension Data) and four others.

But in the aftermath of the stage that saw the overnight race leader and Slovakian world champion world champion Peter Sagan (Boar-Hansgrohe) finish 49th at 2:33 behind, Porte and Impey were locked on equal time overall after all the time differences and time bonuses for the stage were counted.

In third place overall was Slagter, the 2013 tour winner.

Impey, who began the stage in second place overall at two seconds to Sagan, was eventually awarded the Santos Ochre Leader’s jersey after having the lowest count back of stage places.

Will Porte Challenge for Time Bonuses?

Technically, Porte can still challenge for the overall lead in Sunday’s sixth stage, a 90km circuit race in Adelaide by going for time bonuses in the two intermediate sprints and finish.

However, as both riders recognised after Saturday’s stage, the chances of Porte pulling off such a feat are highly improbable – and not just because of Porte’s lack of sprint.

Not only is Impey a handy sprinter – as he has reminded here – but his team also have two other options for sprints in NSW’s Caleb Ewan and South Australian Alex Edmondson who could easily cover Porte should he attempt an upset.

Asked how optimistic he is of defending the overall lead and winning the Santos Tour Down Under, Impey, whose last spell in an overall race leader’s jersey was in the 2013 Tour de France when he wore the yellow jersey on stages 6 and 7, was bullish.

“I am feeling confident, barring anything happening,” Impey said.

“If Richie wants to have a go for the sprints we have got Caleb, ‘Edmo’ [Edmondson] and myself to try and beat him for the sprints. I think he has his work cut out for him that way.”

Impey will understandably still remain vigilant on Sunday. But assuming Porte is unable – or unwilling – to challenge for the intermediate time bonuses and they are on the same time going into an anticipated sprint finish, Impey’s lead-out role for Ewan should provide another better stage result than Porte.

Furthermore, Porte all but conceded that he will not challenge, realizing that Impey’s Mitchelton-Scott team is a far better sprinting power here as a team than his BMC team.

Porte is happy enough to have again won the Queen stage of the Santos Tour Down Under after recovering from a broken pelvis – among other injuries – in a horrific high speed crash while descending a mountain in last year’s Tour de France.

“Daryl is quick. He has been second two times in stages here against guys like Sagan,” Porte said.

“Realistically, I don’t have a chance to move up because if I start going then guys like Caleb Ewan are going to start going in the intermediate sprints too. I am happy with where I am all things considered.

“I had a tough half end to last year. To be up here and win at Willunga for the fifth time in a row, I would have to say I am happy; but of course I would have loved to win here as well.

“If I was good enough to win I would have won it today on Willunga. Hats off to Daryl. He is a good mate, a fantastic bike rider. I have to be happy with second to be honest.”

For Impey, Saturday’s outcome came as a surprise for some, considering his team had not championed his overall chances in the Santos Tour Down Under.

Mitchelton-Scott said its priority was to try to help Ewan win stages in bunch sprints.

However, Impey’s form off the back of a strong off-season training in South Africa set him up to utilise his all-round qualities that positioned him well in the sprints and hills.

While the team did not publicise it, Impey was elevated to a leadership role for the Australian UCI WorldTour event, and he admitted after that the team was deliberately coy about it.

“We came with the objective for Caleb for sure,” Impey said.

“But we kept it quite quiet. I put quite a bit of work in back in South Africa. It [the tour] really was a target for me this year, but we tried to keep it on the down … It was just fantastic to have the team support me the way they did. To commit to me and to commit for Caleb the way they did is special.”