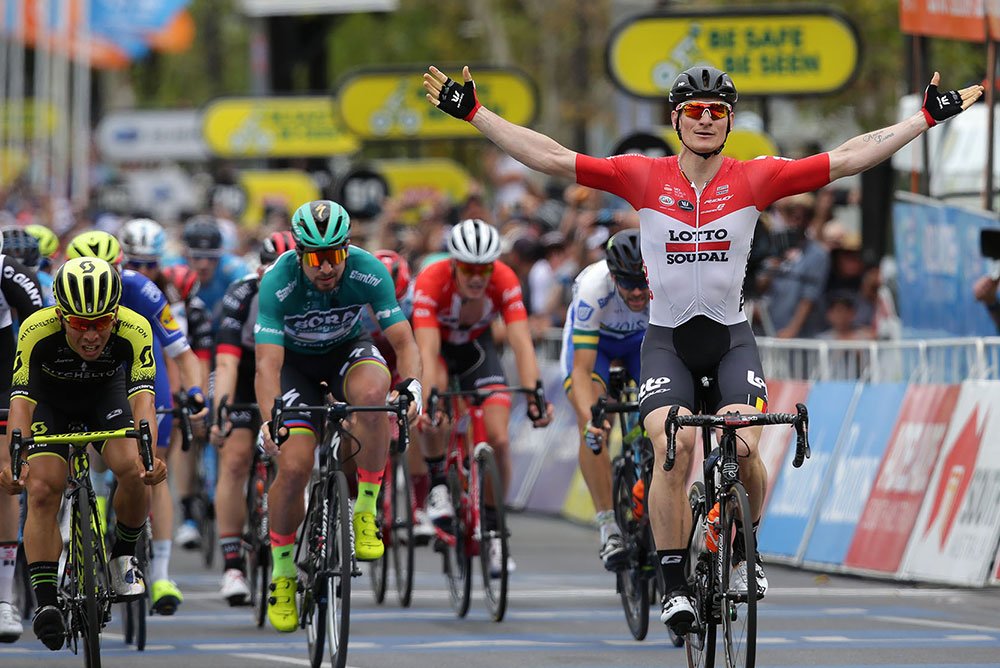 Daryl Impey is the new king of Adelaide after taking the Santos Ochre Winner’s Jersey on the city’s streets on Sunday afternoon, while the Be Safe Be Seen MAC Stage 6 was taken out by André Greipel (Lotto Soudal) from Caleb Ewan (Mitchelton-SCOTT) and Peter Sagan (BORA-hansgrohe).

It is the first time a South African has claimed the winner’s ochre in the race, and comes as neo-pro countryman Nic Dlamini (Team Dimension Data) took the Subaru King of the Mountain winner’s jersey following his domination of that classification earlier in this week.

The result is noteworthy for Impey’s Mitchelton-SCOTT team as well, given it came to Adelaide seeking stage wins for lead rider Caleb Ewan – not the general classification.

It also means Mitchelton-SCOTT (the current guise of the GreenEDGE operation) draws level with AG2R La Mondiale with four GC wins at the race.

Speaking after the race, Impey dedicated his thrilling victory to his family back in South Africa, but admitted it was a nervous day in the saddle.

“Coming in … I didn’t expect to win the race, but sometimes the stars line up and things go according to plan,” Impey said.

“I worked real hard in the off-season, [I’m] so happy to get this win.

“[But] it was pretty hectic… I’ve been in this position before with Simon [Gerrans] trying to defend the jersey for him.

“I’ve prepared for that. But it’s definitely more nerve-wracking when you have the jersey yourself.

“I’m stoked to get to the line, and obviously with the team I knew it was under control.”

Notably, Mitchelton-SCOTT claimed both the men’s and women’s general classifications at this year’s event, with Amanda Spratt claiming the victory in the Santos Women’s Tour Down Under.

For Greipel, the German sprinter’s victory extended his stage wins record to 18 at the Santos Tour Down Under.

His Be Safe Be Seen MAC Stage 6 win was just the second time this year that a rider had claimed multiple stages (Greipel won Stage 1 in Lyndoch as well).

The peloton was truly out of formation as it swung down Pennington Terrace and onto the final uphill sprint to the line on King William Road.

Quick-Step emerged as the best positioned team on the run to the line, with Elia Viviani gunning for his second victory.

Caleb Ewan (Mitchelton-SCOTT) drew level with the Italian, but Greipel came from six deep with his incredible turn of speed to take victory.

2018 marks the first time since 2013 that an Australian has failed to win a classification in the Santos Tour Down Under, highlighting the truly international spirit of the event.

Bahrain-Merida was crowned the Wilson Parking Winning Team for having the best cumulative time across its line-up.

Meanwhile, the American rider Logan Owen (EF Education First-Drapac p/b Cannondale) claimed the merit of being the final southaustralia.com Most Competitive rider for this year’s tour.

He and Ben O’Connor (Team Dimension Data) pushed for the points across the two southaustralia.com prime sprints and the Subaru King of the Mountain on Montefiore Hill during Sunday’s concluding stage with Owen taking the first prime sprint and final KOM points, while O’Connor took the other two opportunities in those classifications.