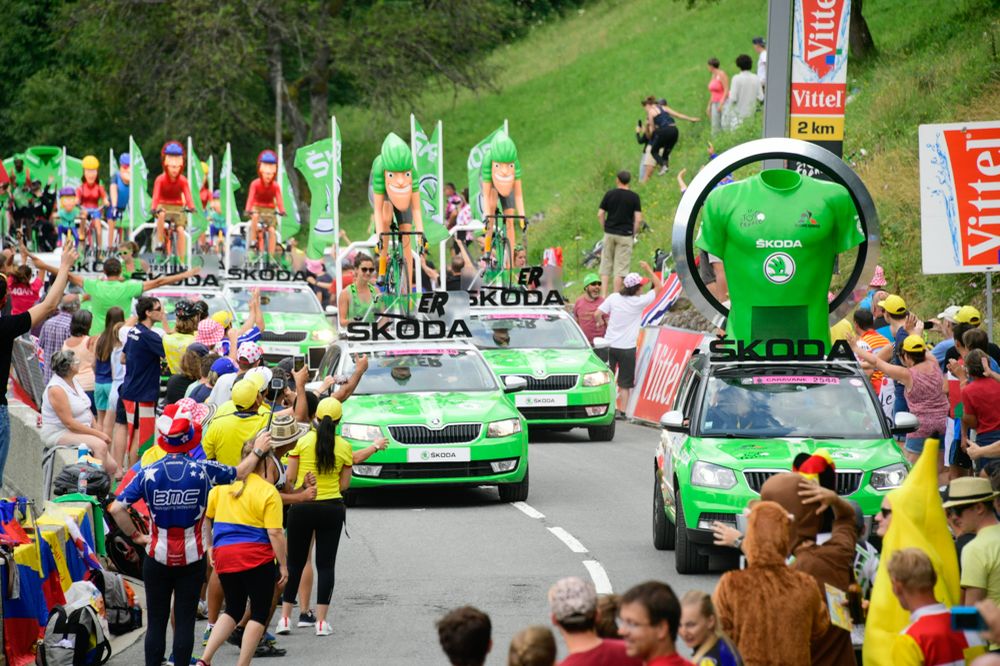 Romain Bardet (Ag2R) claimed stage 19 of the Tour de France today, after escaping from the yellow jersey group on the lower slopes of Mont Blanc and later powering his past Rui Costa (Lampre-Merida) during the closing kilometers –  who was the last survivor of the day’s breakaway group.

Meanwhile, Joachim Rodriguez (Katusha) and Alejandro Valverde (Movistar) followed the young French rider across the finish almost half a minute later to round out the podium.

Earlier in the stage, race leader Chris Froome (Team Sky) managed to recover from a crash alongside Vincenzo Nibali (Astana) during the descent just before the final climb.

Fortunately for Froome, his teammates were able to usher him back to the group and out of jeopardy.

In the meantime, second place GC rider, Bauke Mollema (Trek-Segafredo), was not so fortunate, as the Dutch rider veered off the road along the same decent, and failed to regain contact with the group – thus surrendering his second place position and slipping as far back as 10th place in the overall classification.

As for Adam Yates (Orica-BikeExchange), the third place GC rider was forced to fight his way back after suffering a mechanical problem just before the penultimate climb, consequently slipping back to fourth place at the end of the day.

Froome now leads Bardet in the overall classification by 4:11, followed by Nairo Quintana (Movistar) who capitalized on the day’s dramatic events to move up into third place at 4:27 back.

Earlier in the day, Astana broke up the monotony of today’s stage by taking over the pace-setting duties from Team Sky, subsequently causing several good climbers to fall off the back of the peloton.

When the rain started falling during the final 50 kilometers, the peloton was plagued by a number of crashes, beginning with Pierre Rolland (Cannondale), who came down hard on a descent and struggled to get back on his bike, while Porte was left with a fight to rejoin the peloton after a similar crash along the wet roads.

Up ahead, Rui Costa (Lampre-Merida) was waging a lone battle, while several of his former breakaway companions attempted to bridge their way back to him.

Froome was the next casualty, when the British race leader went down hard on one of the corners of the recent, forcing him to take the bike of teammate Gearaint Thomas in order to resume racing.

At that point, Bardet had already attacked off the front of the peloton, quickly gaining almost a minute at the base of the final climb.

From there, the French rider made his way up to Costa with just under 8 kilometer to go.

Back in the peloton, BMC decided to attack with the goal of moving Porte up to the front.

However, shortly thereafter, Dan Martin (Etixx-Quick Step) accelerated off of the front in pursuit of the lead duo, where Bardet had finally managed drop Costa just before the summit.

Porte once again upped the pace, with both Quintana and Froome easing their way up to him.

The pace proved to be too much for Yates however, as the white jersey holder slipped off the back of the peloton during the final 3 kilometers.

Meanwhile, Martin was caught by Joaquim Rodriguez (Katusha) and the rest of the group, as Froome came to the front in hopes of deterring any further aggression.

Porte and Quintana would later attempt one final attack, but it was Fabio Aru (Astana) who gained the bigger advantage before Alejandro Valverde and Quintana came to the front for Movistar.

As a result, Froome conceded time to both Quintana and Porte in the end, while Yates fell to 13th position – losing his podium spot to Quintana.