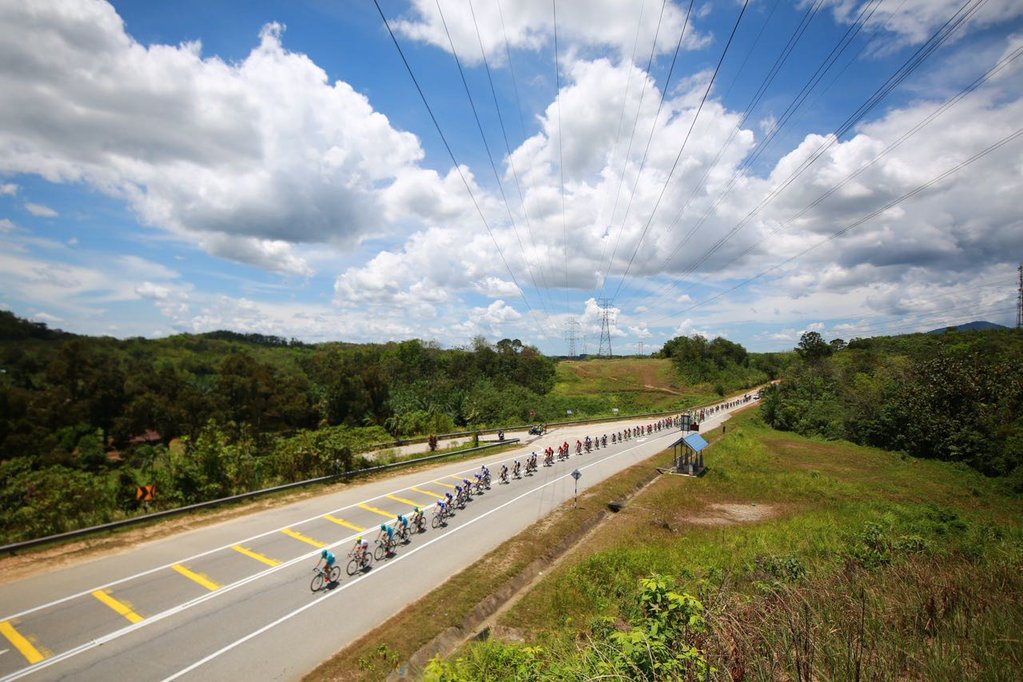 Apart from a short-lived attack from a handful of riders from ONE, Funvic and Southeast, no one managed to ride clear during the first 20 kilometers of racing.

As the peloton approached the first KOM sprint at the 29 kilometer mark, Team Hengxiang did an excellent job of setting up their KOM leader Wang Meiyin, to hold-off any challenges from Marcelo Felipe (7Eleven) and Kangeun Joo (KSPO).

Not long after, Guardini took the first of the intermediate sprint points ahead of van Rensburg, Matthew Goss (ONE) and Jesper Hansen (Tinkoff).

The first split in the peloton didn’t occur until the 48.5 kilometers mark, with Julen Amezqueta (Southeast) managing to escape briefly for a few kilometers before being reined back in.

Less than 10 kilometers later, Karol Domagalski (ONE) and Amir Mustapha (Malaysia) attempt a subsequent attack, but the duo was quickly reeled back in as well.

From there, van Rensburg looked poised to win the second intermediate sprint at the 63 kilometer mark, but the Dimension Data rider punctured just before the line, giving way to Luca Chirico (Bardiani) to claim the points ahead of Jesper Hansen, Michael Kolar (Tinkoff) and Lachlan Norris (Drapac).

Finally, a small group containing Meiyin, Kim Hyeonseok (KSPO), Mazuki Amirul (Terengganu), Loh Sea Keong and Mohammed Aiman (Malaysia), came to shape the day’s first breakaway group. And, from there, the escapees succeeded in establishing a 3:20 advantage over the peloton.

Manarelli won the next of the KOM points up for grabs, ahead of Meiyin and Hyeonseok.

However, at that point the escapee’s lead had dwindle to less than two minutes, with Astana busy setting the pace at the head of the peloton.

Heading into the final 40 kilometers, Manarelli once again took the last of the KOM points head of Meiyin, Hyeonseok and Aiman.

Not long after however, the breakaway group would surrender one-by-one to the peloton, leaving Meiyin, Loh and Amirul as the last of the escapees to get swept up, as the race once again readied itself for another sprint finale.

With 5 kilometers to go, Drapac hit the front to organize the lead-out, only to be passed by Dimension Data who took control as they entered the final 2 kilometers.

The South African team stayed on the front with two riders until Drapac again came to the fore just before the flamme rouge. That’s when Tinkoff launched their train, as Evgeni Petrov succeeded to deliver his teammates Michael Gogl, Michael Kolar and Erik Baska into the first three positions.

Gogl and Kolar did the lead-out for Baska who was followed by Brenton Jones (Drapac), van Rensburg, the Androni pair of Marco Benfatto and Francesco Chichi – followed by Guardini.

However, the outcome was never in doubt, as Guardini easily powered his way past his rivals with plenty of time to celebrate his fourth victory, while Palini made a strong finish to nix van Rensburg on the line and take second place.

Meanwhile, Miguel Angel Lopez finished safely in the peloton to retain his grip on the overall race lead. However, after van Rensburg picked up a total of 6 bonus seconds in the first intermediate sprint and at the finish, he saw his advantage over the South African rider reduced from 29 to 23 seconds.