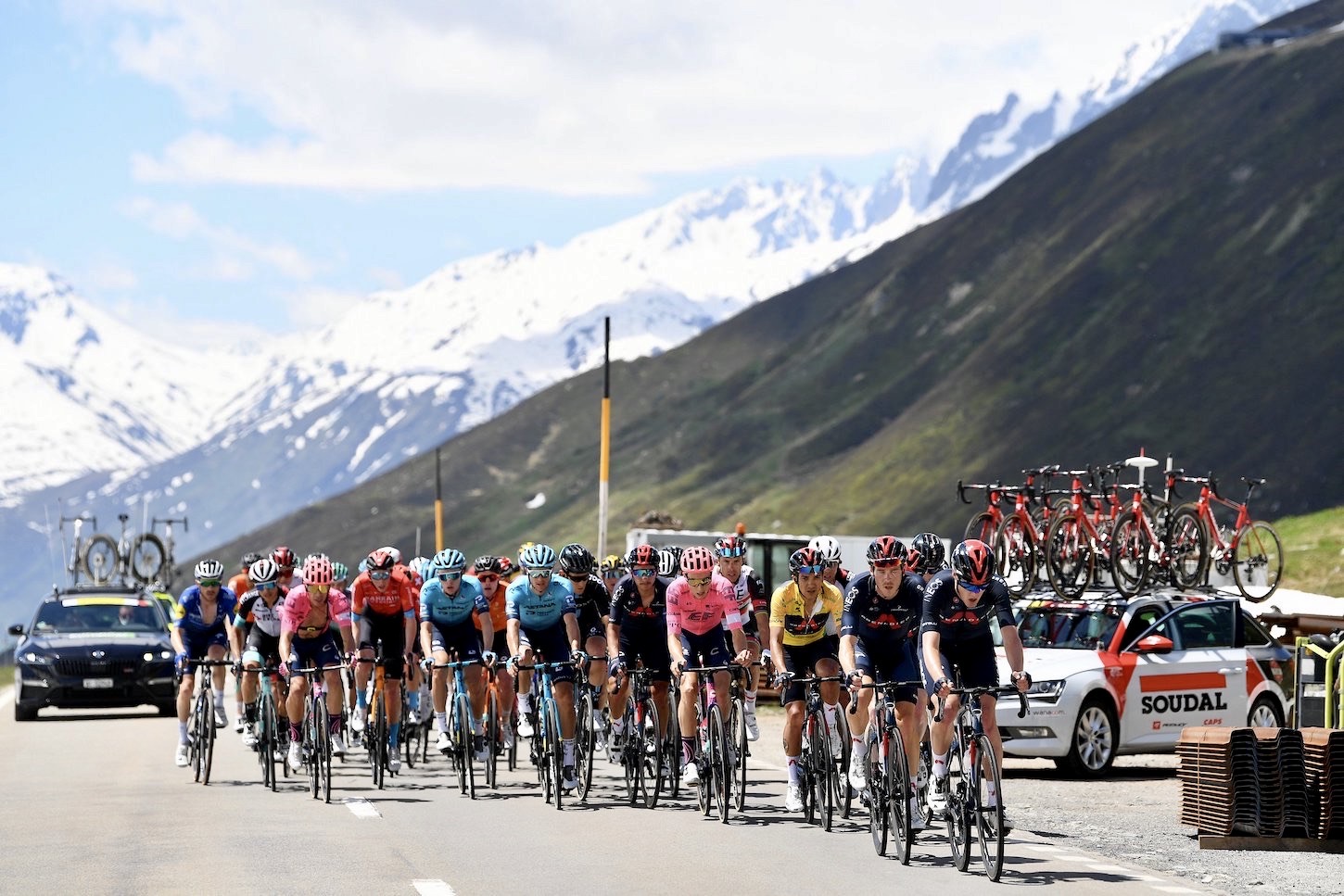 Carapaz negotiated attacks from Rigoberto Uran (EF Education-Nippo) as he kept hold of his 17-second lead, taking another title for Ineos Grenadiers.

“I’m really happy it’s a team victory as we’ve all worked together really well,” said Carapaz after his win.

“When you know you do things well you always get your reward and we have got a lot of confidence for what is to come.

“The truth is this is a showing of the strength of the team that we have and of course I am going to share the leadership with Geraint,” Carapaz explained. “We just want to win the Tour [de France] and depending how it goes, and we are going to go there with a strong team.”

Meanwhile, Mäder pulled away from the leading bunch and sprinted away from Michael Woods (Israel Start-Up Nation) to claim the stage victory.

Mäder and Woods descended into the final kilometers in Andermatt together before Woods lead out the final sprint in Andermatt. Mäder timed his move to surge past the Canadian in the final 50 meters, scoring his second victory of the season.

In the meantime, Mattia Cattaneo was rewarded for an attacking ride with third-place.

Sunday’s race was a combination of Friday’s sixth stage and Saturday’s mountain time trial, with both routes added together, albeit in the opposite direction. This made for a particularly tough day, with Oberalppass, Lukmanierpass and the Gotthardpass combing for a total of 3,560 meters of climbing.

Attacks began the moment the flag dropped, Wout Poels (Bahrain Victorious) getting away while chaos reigned behind him, with other teams desperate to close him down.

Over the top of the Oberalppass, with 12km done, Poels had a lead of around 20 seconds, but Poels was caught by five chasers on the descent.

From there, Marc Soler (Movistar) Omar Fraile (Astana-Premier Tech), Fabien Doubey (Total Direct Energie) Dries Devenyns (Deceuninck-Quick-Step) and Søren Kragh Andersen (DSM) Poels’s group were not allowed too much of an advantage, with three chasers only 15 seconds back when they reached the bottom.

The road began to climb almost as soon as they reached the valley, where the leaders were joined by Stefan Küng (Groupama-FDJ) and two DSM riders, Tiesj Benoot and Andrea Leknessund, making for a group of nine riders

However, after 37km more attacks came from the peloton and those who had just managed to get back on drifted backwards again as the bunch began to shatter on the climb to Lukmanierpass.

Hermann Persteiner (Bahrain Victorious), Nans Peters (Ag2R Citröen), Mauri Vansevenant (Deceuninck-Quick-step) also got across, and a group of 15 fought for the mountains points on Lukmanier, as the peloton allowed the gap to grow.

As the final climb approached cohesion in the breakaway began to falter, leaving only Devenyns, Pernsteiner, Peters, Leknessund and his DSM team-mate Benoot at the front.

As they reached the cobbles of the Tremola climb of the Gotthardpass only Benoot and Pernsteiner remained, while Carapaz’s team led the bunch only 30 seconds back.

The Austrian made an attempt to stay away, but was only delaying the inevitable and was caught when the attacks began three kilometers before the top of the climb.

Urán attacked shortly afterwards, dropping Carapaz’s only domestique, Eddie Dunbar. However, Urán was unable to shake his rival and a group of nine formed.

Woods took a 20 second lead over the top of the climb, and on the  15km descent to the line was joined by Mäder with the pair going on to fight for the win.