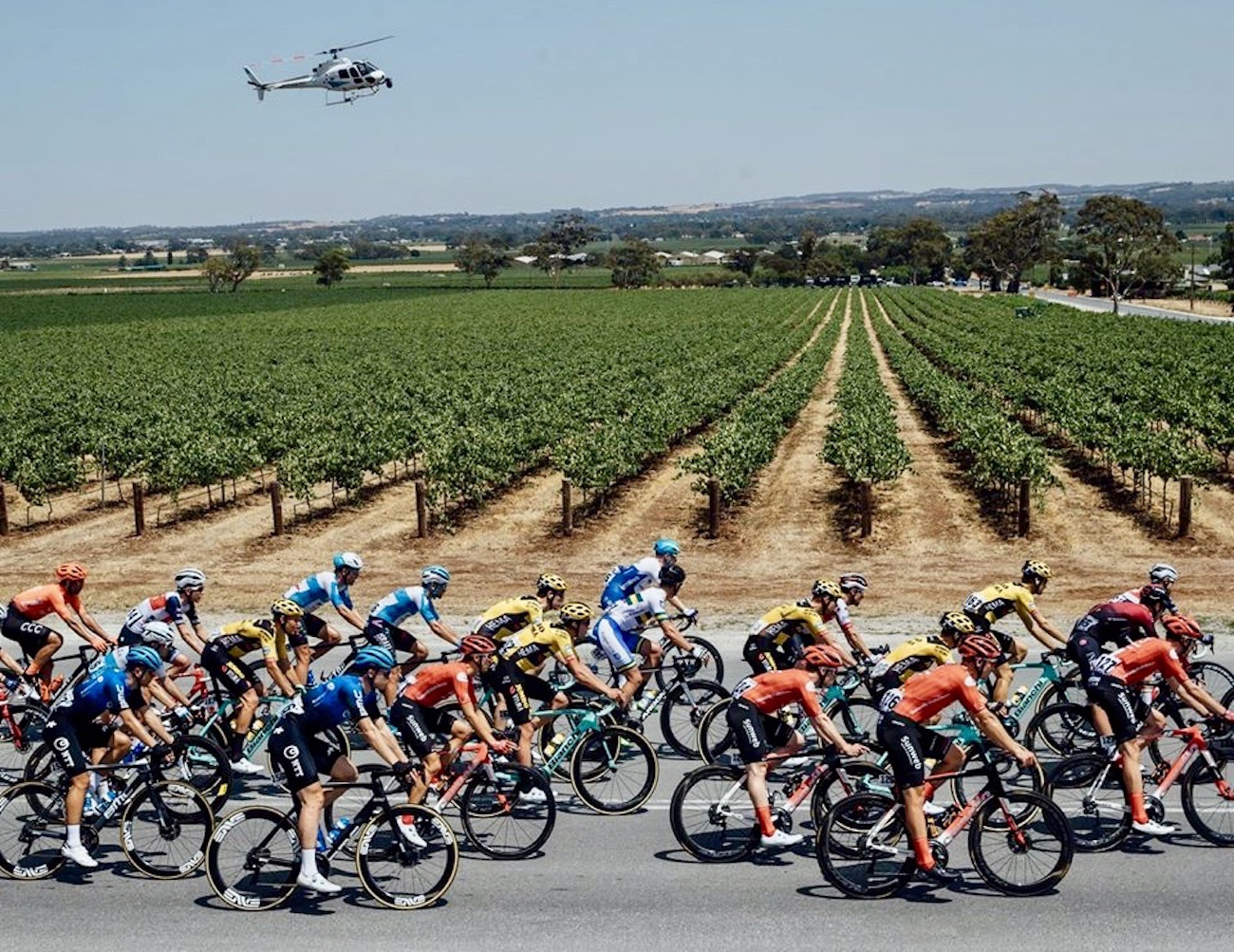 In just his second race in the Deceuninck-Quick-Step colors, the reigning Irish champion Sam Bennett has repeated the team’s efforts from one year ago, winning the opening stage of the Tour Down Under today, claiming the first Ochre Leader’s Jersey of 2020.

The 29-year-old Irish winner of the stage was pushed all the way to the line by the young Belgian sprint sensation, Jasper Philipsen of UAE Team Emirates, but Bennett took the victory by roughly a bike length.

Bennett, the winner of three stages of the Giro d’Italia and two at the Vuelta a España last year (while riding out his contract with BORA-hansgrohe), held his nerve and maintained his top-end speed in pursuit of the fast finish by Philipsen and, metres before the line, surged into the lead, crossing the line first but saving his salute until he was assured that the win was his.

The Irish champion’s jersey was swapped soon after for the ochre colour of race leader. He was also presented with the blue jersey as leader of the Ziptrak Sprint classification.

The victory in Tanunda today is Bennett’s first TDU stage win and although pleased, he remained calm on the podium offering only a few quiet words when asked to explain his race and the emotions associated with becoming the latest sprinter to join the Wolfpack and benefit from the impressive work of lead-out maestros like Michael Morkov. There were several riders on Bennett’s side who were also part of the support cast that set things up neatly for Elia Viviani one year ago, when – as the Italian champion, and part of the Wolfpack (before his move to Cofidis Solutions Credit for 2020) – took the first TDU stage win in 2019.

Bennett essentially replaces Viviani at Deceuninck-Quick-Step in 2020 and immediately he has reaped the rewards of the work done by his team-mates.

“The team has 11 new riders and here today were four new riders,” said Bennett, “and the team still rode the same.

“I think the experience of the other guys proved to be the difference.

“It wasn’t easy [to slot into the sprint role],” continued Bennett before adding: “But there’s a lot of experience in the team, and they kept that Wolfpack characteristic and it just worked really well.”

Bennett singled out the work of his New Zealand teammate, Shane Archbold, as something that made a winning difference.

“The whole team did a fantastic job and then Shane did a monster effort and it made it perfect for Morkov to wind it up because it meant he didn’t have to be exposed before he did his effort.

“Everybody did a fantastic job today.”

The 150 kilometer stage began with cooler than usual conditions and a light breeze in the Barossa, a region of South Australia famous for wine production. Riders faced five laps of a 30 kilometer circuit with the start and finish in Tanunda, a regular destination in the history of the Tour Down Under.

There was no neutral zone and the race began with a temperature of 20 degrees celsius but as the cloud cleared and sun shone, temperatures rose to almost 30 degrees – hot, but nothing close to the scorching conditions of the TDU one year ago.

With rolling hills early on the circuit, and the first of Ziptrak Sprints coming after rounds 15 kilometers, the peloton stayed together through to the rush for sprint points (and time bonuses) in Angaston.

On the approach to the first Ziptrak Sprint, Team INEOS amassed at the front of the peloton, setting things up for Chris Lawless and the young Brit did his best collect some early time bonuses.

At the line, however, it was a familiar scene for the Santos Tour Down Under, with the two-time champion (2018 and 2019) from Mitchelton-Scott, Daryl Impey, shaving three-seconds off his time by beating Lawless and Cofidis’ GC hope, Nathan Haas, in the sprint.

After collecting his time bonus, Mitchelton-Scott’s Impey stopped to swap bikes with an apparent mechanical issue so he was seen (for some of the stage) on last year’s grey Scott bike, rather than the new-season colours.

The opening laps were ridden at a steady tempo and the advantage of the escapees grew to 3:00 after 50 kilometers. This was the maximum gain for the quartet.

Points for the polka-dot Subaru King of the Mountain Jersey were awarded on Breakneck Hill during the second and fourth laps, 46.9 kilometers and 106.9 kilometers, respectively. It was Drizners who led Rosskopf and Sunderland, over the line.

The leading quartet worked well together through to the 93 kilometer mark when Rosskopf took advantage of a slight rise and went on the attack. There wasn’t a reaction from the Aussie trio and the American from CCC worked up lead of 25 seconds after a couple of kilometres on his own.

There was a touch of wheels at the 101km mark, with riders from BORA-hansgrohe and UAE Team Emirates caught up on the right-hand side of the road. Aleksandr Riabushenko (UAE) suffered most and didn’t remount his bike. He got in the race ambulance, holding his wrist and will attend hospital for examinations this afternoon.

On the approach to Breakneck Hill for the second category-three Subaru King of the Mountain, Rosskopf was alone at the front of the race, while the other escapees were all soaked up by the peloton. Rosskopf had a lead of 1:35 going through Angaston (105km). There was a surge from Drizners and De Vreese (Astana) on the approach to the second KOM; Rosskopf claimed first (3pts) with Drizners second (2pts) and De Vreese third (1pt).

All together for the approach to the line

Rosskopf and Drizners were equal on points in the quest for the Subaru King of the Mountain Jersey but Jarrad Drizners got the nod to attend the podium ceremony as he finished the stage ahead of the American from CCC.

Once Rosskopf took the points of the final climb his time in the front was over; he got swallowed up by the bunch at the 114km mark. From there the peloton was bunched through to the finish, with only a handful of riders – including world champion, Mads Pederson, drifting behind the peloton in the closing kilometres.

Meanwhile, Rosskopf’s CCC Team was asked to ensure he was present at the podium to collect the award for the Honda Motorcycles Most Aggressive Rider prize.

Bennett takes the win ahead of Philipsen

“I think it was definitely the work of the team that earned the win today,” said an elated Sam Bennett moments after taking his first victory with the Wolfpack. And he certainly doesn’t take the support for granted. “I’d be lying if I said I didn’t feel the pressure coming to Deceuninck-Quick-Step and trying to get that first win.

“The guys did an absolutely fantastic job, kept me in a great position, and then executed the lead-out perfectly. Every one of them played a superb role today.

“I did make one mistake, leaving it too late because it was a fast final,” said the humble winner in Tanunda. “I had trouble getting my wheel back in front but hopefully there’s another win later this week.”

The peloton is down one rider and we wait to find out how Riabushenko was affected by the crash that forced him to abandon. It’s a shame for UAE Team Emirates but that team can also take inspiration from the efforts of Philipsen who was Bennett’s closest rival in the sprint.

The top placings were earned by riders with a considerable reputation for sprinting: Bennett and Philipsen, followed by Erik Baska (BORA-hansgrohe), Elia Viviani (Cofidis), André Greipel (Israel Start-Up Nation), and Kristoffer Halversen (EF Pro Cycling); but down the results list you’ll see Caleb Ewan’s name in seventh place. Ewan, the winner of the Schwalbe Classic on Sunday, wasn’t able to challenge Bennett today. He lamented his poor positioning but also insists that he’s not done with yet. He’s still feeling confident and believes he can win again this week but it wasn’t to be in Tanunda where the Irishman from the Wolfpack got the last laugh.