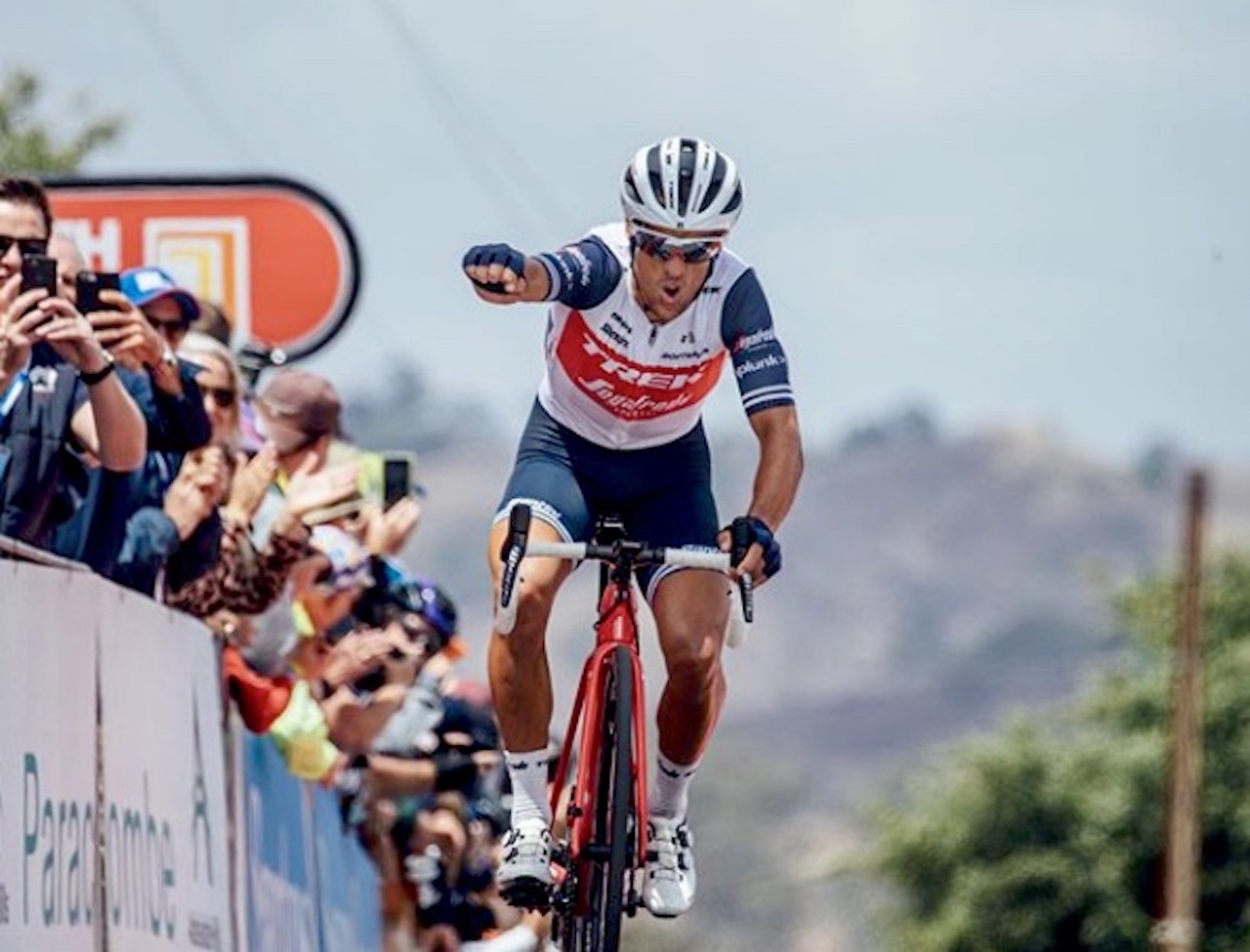 “The team was fantastic, firstly,” said an elated Richie Porte moments after crossing the finish line atop the steep climb up Paracombe Road at the end of stage 3 of the Down Under today.

“I have to take my cap off to those guys firstly,” continued Porte. “They put all their faith in me today. They did a really good job at controlling it. I felt good at the bottom of the climb and I got a bit of a gap there. My neo-professional teammate Juan Lopez was really good and it was a shame it was such a headwind in the final; [without it] I think we could have done some real damage.”

Still, he did enough to not just win the stage but he took the Ochre Leader’s Jersey too.

The race lead was expected to change and although Caleb Ewan reached the base of the climb with the front group, he soon lost contact when it got steep. The winner of Novatech Stage 2 finished Subaru Stage 3 in 61st place and is now ranked 55th at 2’19”.

With the time bonus for first place, and an advantage of five seconds over a group of eight who battled together to limit their losses to the experienced and capable climber who attacked at the base of the final hill, Porte now leads the 22nd Tour Down Under by six seconds.

It was an impressive display but the Tasmanian won’t be lulled into believing the race for the title is over. He knows all too well how big an impact time bonuses have, and he also understands how good the two-time champion, Daryl Impey, is at sprinting for these time gains.

Paracombe Road was used as a launch pad for the overall victory in 2015 when a selection of climbers closely marked each other much of the way up the relatively short, but steep climb that has an average gradient of 9.3 percent, with one nasty section at 20 percent.

Back in 2015, the game of tactics that backfired; Porte, Cadel Evans, Tom Dumoulin and Domenico Pozzovivo were all so concerned with one another that they didn’t have a chance to respond when local superstar, Rohan Dennis, blasted on by them all and took an outstanding victory.

This scene was replayed in Porte’s mind today as he took the initiative early. ‘To hell with the headwind,’ he seemed to say, ‘I’m going!’ And off he set, onward to a considerable advantage that earned him the win and a lead of six seconds over Impey. The runner-up in stage three, Rob Power (Team Sunweb) now moves up to third overall, nine second behind Porte.

“I think back to 2015 when myself and Cadel Evans were looking at each other and Rohan came from behind and smacked us, won the stage, and won the Tour. So to win here this year is a really good feeling,” said Porte before attending the podium protocol to collect his first Santos Ochre Leader’s Jersey of 2020.

“Daryl is still the man to beat the moment, with the bonus seconds on the road,” Porte said, well aware of the South African’s ability to suffer and minimise his losses on the crucial final climb of the final stage, when the race returns to Old Willunga Hill.

He’s already thinking of what’s to come on Sunday but he’s also keen to enjoy his winning moment atop the climb that’s also known as ‘Torrens Hills’.

“To take another victory is a great feeling so I’m going to savour that,” concluded Porte.

In the first Ziptrak Sprint (at 77km) the leading trio absorbed all the points and time bonuses on offer: 1. Scotson 5pts/3”; 2. Boivin 3pts/2”; 3. Bouchard 2pts/1”. Although the riders crested the climb used for the finish four times, points for the polka-dot Subaru King of the Mountain Jersey were only awarded for the final ascent, ranked category-one and translating to the following allocation of points for the first six at the finish: 16pts, 12pts, 8pts, 6pts, 4pts and 2pts.

Although there were more points on offer, Joey Rosskopf (CCC Team) has steadily built a solid collection of points and he maintains his lead in the climbing classification.

Up front during the race, the Australian/Canadia/French alliance was a strong one and the three leaders shared the work well, only interrupting their cooperation to surge for points. At the second Ziptrak Sprint (95km) the order across the line was: 1. Boivin; 2. Bouchard; 3. Scotson. Despite their efforts, the peloton steadily ate away at their advantage and with 3.0km to go, the trio were just 35” ahead.