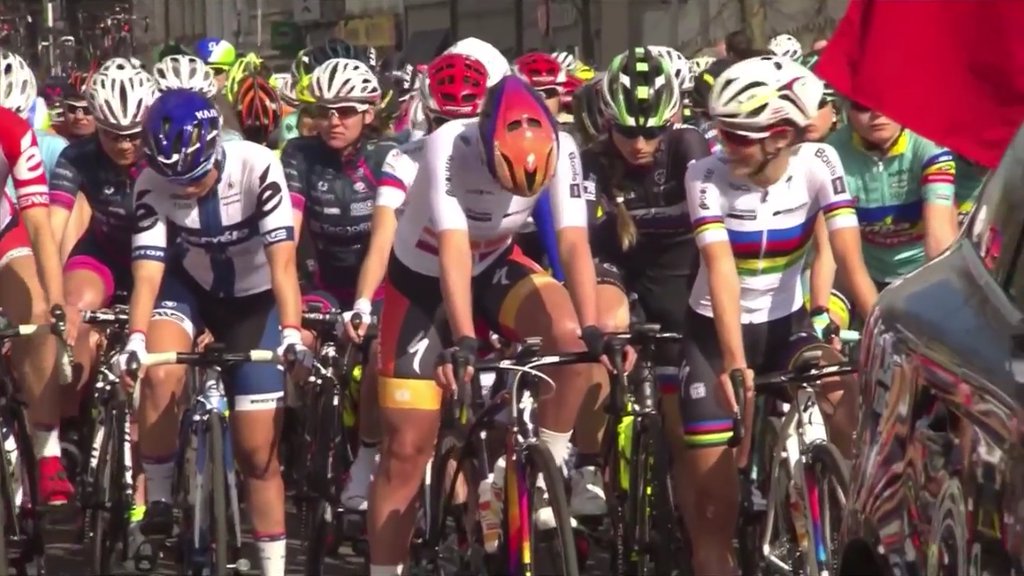 Lizzie Armitstead (Boels Dolmans) managed to edge out Emma Johansson (Wiggle High5) in what turned out to be a photo finish in today’s Women’s Tour of Flanders.

With less than 150 meters to go, both riders proceeded to open up their sprint, and proceeded should-to-shoulder in a frantic dash for the line – with Armitstead seizing the victory by the closest of margins.

Despite a series of breakaway attempts, the peloton remained together for the first half of today’s race.

However, after 70 kilometers of racing, Thalita de Jong (Raboliv) and Iris Slappendel (United Healthcare) succeeded in riding clear along the cobbles of the Paddestraat.

Slappendel later proved unable to keep on terms with her breakaway companion, while tackling the third climb of the day, and subsequently fell back into the clutches of the peloton.

In  the meantime, De Jong continued to remain out front alone, clinging to a half minute lead along the Berendries. But, it wasn’t long after, that the Belgian rider was caught by the Boels-Dolmans controlled peloton along the 6th climb, just after the 100 kilometer mark.

From there, a flurry of attacks followed along the Kanarieberg, with 11 riders taking to the front. But, short of a couple of acceleration on the part of Megan Guarnier (Boels-Dolmans) and Elisa Longo Borghini (Wiggle-High5) on the Kruisberg, the head of the peloton came back together just before the start of the Oude Kwaremont.

The grueling nature of the Oude Kwaremont took its toll on the peloton, quickly reducing it to a group of 11 riders again, with race favorites such as Longo Borghini, Armitstead, Pauline Ferrand-Prévot (RaboLiv) and Emma Johannsson (Wiggle-High5), demonstrating their mettle along the steep climb.

After cresting the Oude Kwaremont, a well-timed move came from Johansson along the way to the Paterberg, with only Armitstead able to match her aggressions.

It wasn’t long before the duo opened up a slight gap over the remaining 9 chasers, as they reached the foot of the Paterberg, with Armitstead  forced to do most of the hard work.

With just 4 kilometers remaining, the duo’s lead had stretched out to almost 20 seconds, while Ellen Van Dijk (Boels-Dolmans) did her best to slow the chase in the interests of her teammate – Armitstead.

With their lead reduced to just 10 seconds during the final kilometer, Johansson began opening up her sprint, briefly overtaking Armitstead.

However, the World champion managed to hold her ground, ultimately reaching the finish side by side with her rival, and snatching the victory with a final bike throw.