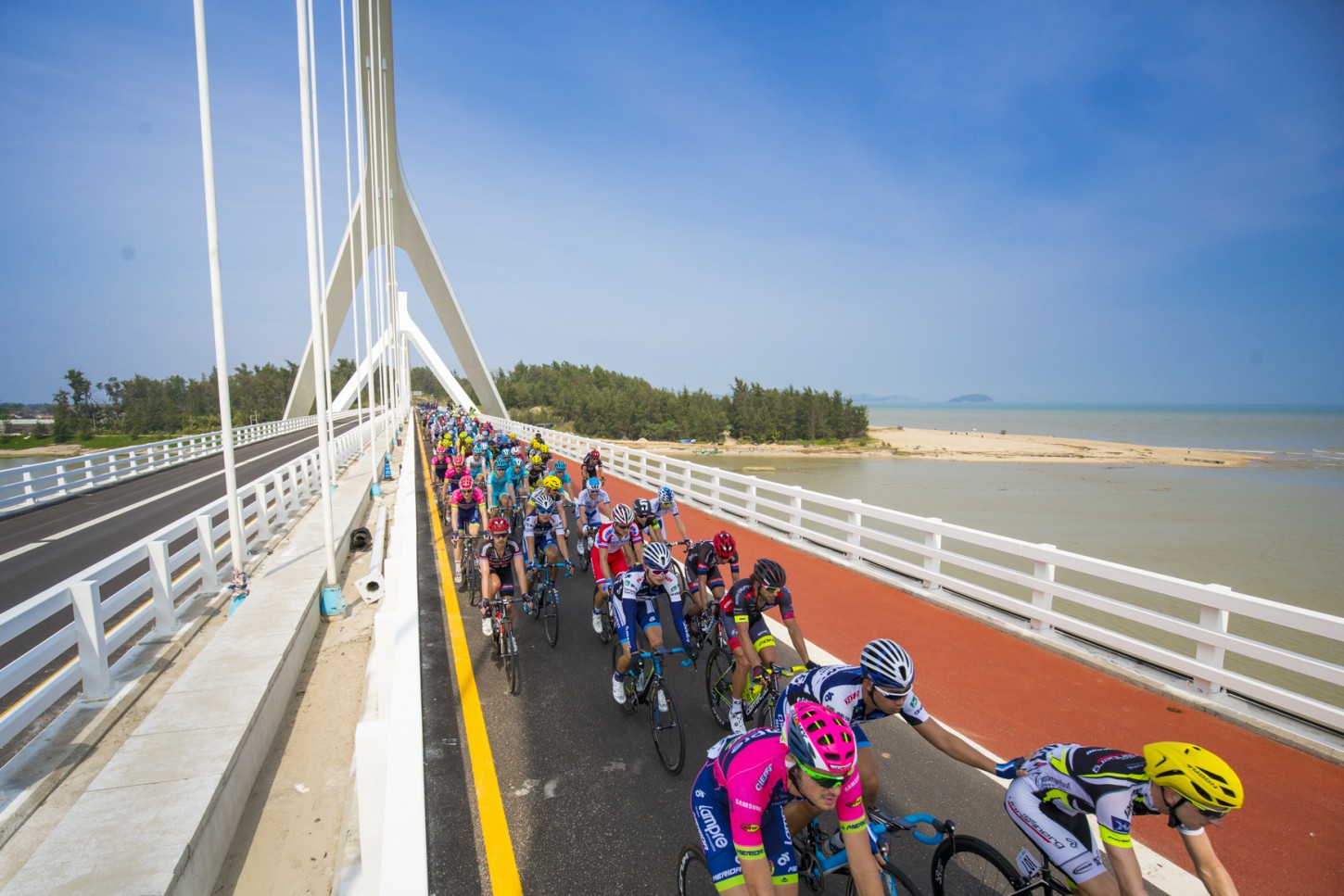 Different day, same straight result for the third stage in a row as German sprinter Max Walscheid (Giant-Alpecin) once again proved he was head of the class with a stage 5 win at China’s nine-day Tour of Hainan (UCI 2.HC) on Wednesday, October 26.

The 23-year-old national road race silver medalist (2016) was forced to kick early to avoid being shut out of the finish, but managed to outmuscle stage 1 winner and previous race leader Rafael Andriato (Wilier Triestina-Southeast) and Roberto Ferrari (Lampre-Merida) at the line. Australian Brenton Jones (Drapac) was also in the mix in fourth – his fifth top 10 result of the race.

“It was a really close sprint and I had to open really early because I didn’t want to get boxed in,” said Walscheid following the 184.9km stage from DanZhou to ChangJiang. “I had strong legs but in the end the others were really strong and I had to go until the last centimetre and luckily it was enough.”

With the early race sprints behind them, riders now face what could be considered the queen stage on Thursday with two category 1 climbs, including the longest with a summit at at 722m in elevation just over 10km from the finish.

“I’m really happy with how the race has gone so far,” said Walscheid, who has no illusions of hanging on to the yellow leaders jersey after stage 6. “Tomorrow is kind of a rest day for the sprinters, so I will try to survive and stay within the time limit. “Hopefully there is another stage for me coming up, but I don’t have big ambitions for tomorrow.”

With Walscheid expecting to surrender the lead, the door will be open for his teammates to vie for a result. However, after five hot, long days of racing in support of the current leader, that could prove to be a difficult task.

“We have a good team here,” explained Walscheid, who along with Fredrik Ludvigsson (DEN) and four other teammates were involved in a horrific head-on collision during a training ride in Spain earlier this year. “But they’ve worked really hard for me in the first five days, so tomorrow they can go on their own if they want. We will work on the tactic tomorrow morning and we will see then how it unfolds.”

One rider expected to contend for both the stage win and the overall lead is Astana’s Alexey Lutsenko (KAZ), who sits in fifth position on general classification (GC) 27 seconds behind the leader. The 24-year-old Kazakhstan rider and 2014 under-23 UCI road race world champion took the mountains classification jersey from 21-year-old Frenchmen Lucas De Rossi (Delko Marseille Provence-KTM), who was forced out of the race due to what is being reported as an orbital bone injury following a mass pileup with 20km remaining in the race. De Rossi’s teammate Ashbjørn Kragh Andersen was also involved and was forced to withdraw.

“Tomorrow is the day,” said 2016 Paris-Nice stage winner, Lutsenko. “It is a good opportunity for a stage win and maybe yellow jersey. I will put all my energy into getting a good result and hopefully I can make it happen.”

Immediately after Lutsenko took the first climb, a category 4 at the 6.9km mark, a seven-man break quickly accelerated to a 55-second lead after 12km.

Former polka-dot jersey holder Zhao took the second KOM of the day, just ahead of Sousa and French climbing specialist Vaubourzeix. A group of five continued onward after Zhao, who is tied on KOM points with Lutsenko, intentionally dropped off.

The 28-year-old Yeung once again claimed the intermediate sprint, this time with Williams (AUS) and Sousa in tow before the break dwindled to just the two riders from Vorarlberg.

Jäger earned ‘Most Aggressive Rider’ honours on the day when he found himself the sole rider to remaining when his teammate Sousa punctured at 41km to go. The 22-year-old Austrian rejoined the field just before the crash that took out De Rossi and Andersen.