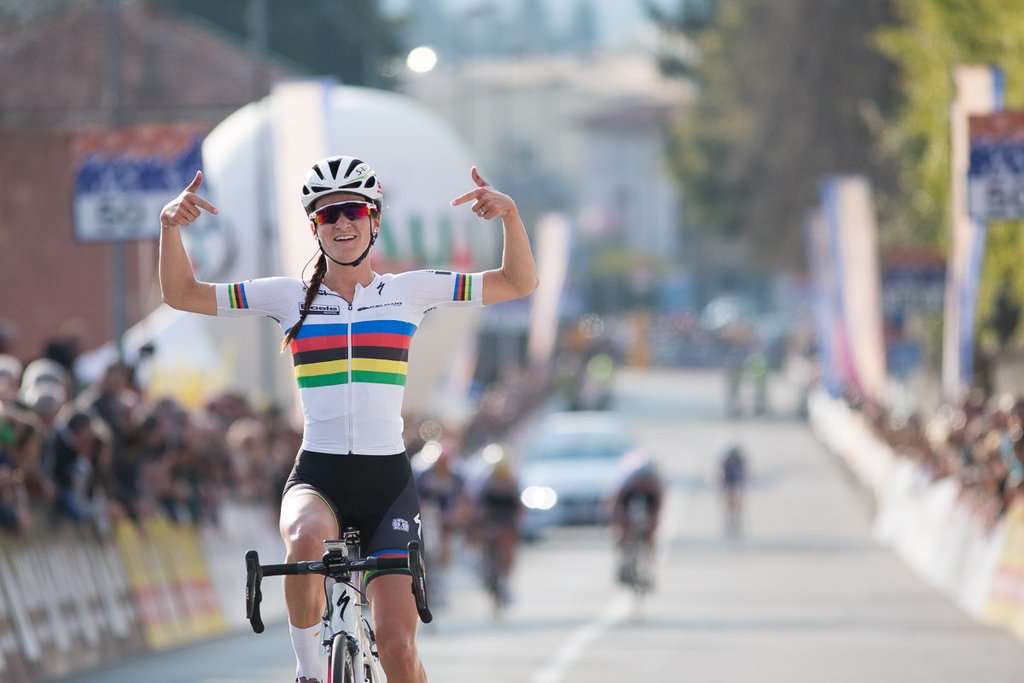 World champion Lizzie Armitstead climbed to the top step of the podium in Cittiglio today, after the British rider turned a late race attack meant to set teammate Megan Guarnier up for victory into a race-winning move.

For Armitstead, it’s back-to-back victories at Trofeo Alfredo Binda, a third win in the rainbow jersey and a jump back to the top of the UCI Women’s WorldTour classification.

For Boels-Dolmans, it’s continued dominance of the inaugural UCI Women’s WorldTour series and another 1-2 punch as Guarnier, won the chase group sprint for second. Three rounds into the inaugural Women’s WolrdTour series, and only Boels-Dolmans riders have managed to climb to the top step of the podium with Armitstead at Trofeo Binda and Strade Bianche and Chantal Blaak at Ronde van Drenthe last weekend.

“It’s all down to teamwork,” said Armitstead. “Absolutely.”

Armitstead and Guarnier were full of praise for the work done by their teammates to propel them onto the podium in Cittiglio. Boels-Dolmans was forced to start with five riders as Evie Stevens came down with the flu on Friday, delaying her 2016 road debut.

“Chantal, Kasia [Pawlowska] and Karol-Ann [Canuel] were incredible,” said Armitstead. “Every time they were dropped, they came straight back to the front of the race asking what they could do. We have five today, and that makes a big difference, but it didn’t matter today because everyone was so good.”

“I barely recognised that we were five,” said Guarnier. “They were just so amazing and always there. It kept me calm all day knowing the girls were so, so strong.”

Today’s winning move went on the third of four local laps over the hilly 123.3 kilometer race.

Each local lap included a single GPM climb, the Orino, but the entire circuit is rolling, which typically makes Trofeo Binda a race of attrition. The Cuvio, a steep kilometre-long unclassified climb at the start of each loop, set the scene for the race’s decisive move.

“The same selection kept happening on every climb,” said Guarnier. “It was just that nothing had stuck yet.”
“This one stuck because of fatigue,” noted Armistead.

Guarnier proved lucky to make the selection. The American champion crashed at the start of the penultimate lap.

“I was on the finishing straight in the middle of the pack, and a girl fell in front of me,” she explained. “My front wheel got taken out, and I got plowed into from behind. I landed on my knee. It hurts a lot now, but in the race, I had enough adrenaline, and my legs were good. I had to not think about it.”

Guarnier chased calmly and steadily back to the reduced peloton. Her teammates were at the back of the bunch, waiting to bring her back to the front of the group. Guarnier had made it back in the nick of time. Within minutes of making contact, Guarnier was in the race-winning selection.

With Armistead, Guarnier and Neff, Emma Johansson (Wiggle-High5), Alena Amialiusik (CANYON//SRAM), Annemiek van Vleuten (ORICA-AIS) and Rabo-Liv pair Anna van der Breggen and Kasia Niewiadom the group contained most of the pre-race favourites and nearly every major team. By the time the eight leaders crossed the finish line for the start of the final local lap, they had a one-minute advantage over the main bunch.

Neff attacked on the Cuvio and quickly gained an advantage.

“I had in my ear our director telling me it wasn’t our responsibility to chase,” said Armitstead. “He said to stay calm and wait, but I was a little frustrated because I knew the peloton was not that far behind us. [Giorgia] Bronzini was still there. She was riding really strong today, and, of course, in her home WorldTour race, she’s going to be motivated. I didn’t want the peloton coming back.”

The work done by the world champion ensured the group’s success and her own.

“I did a little more work than what I was told to do on the radio,” said Armitstead. “On the final climb, Rabobank attacked, and because I had done a lot of work to keep the break going, I was dropped. I could see them, and I knew I had to come back.”

Armitstead clawed her way across the gap and reached the leaders on the summit of the Ornio. With six kilometres still to race Neff had around a half-minute advantage, and Armitstead knew it was now or never.

“I came directly back on the top of the climb,” said Armistead. “I attacked directly. It was my last move. Today we were working for Megan, and I was just being a teammate and doing a stupid attack. But nobody saw me coming from behind, and I had a lot of speed.”

Just beyond the three kilometer mark, Armitstead caught Neff. The duo had a five-second advantage over the chase group as they hit the finishing stretch.

“I jumped,” Armitstead explained. “I was sprinting for the line, and Neff couldn’t match my speed.”

“I only caught Jolanda just before the line,” said Guarnier. “We had already opened the sprint, and that’s how overtook her.”