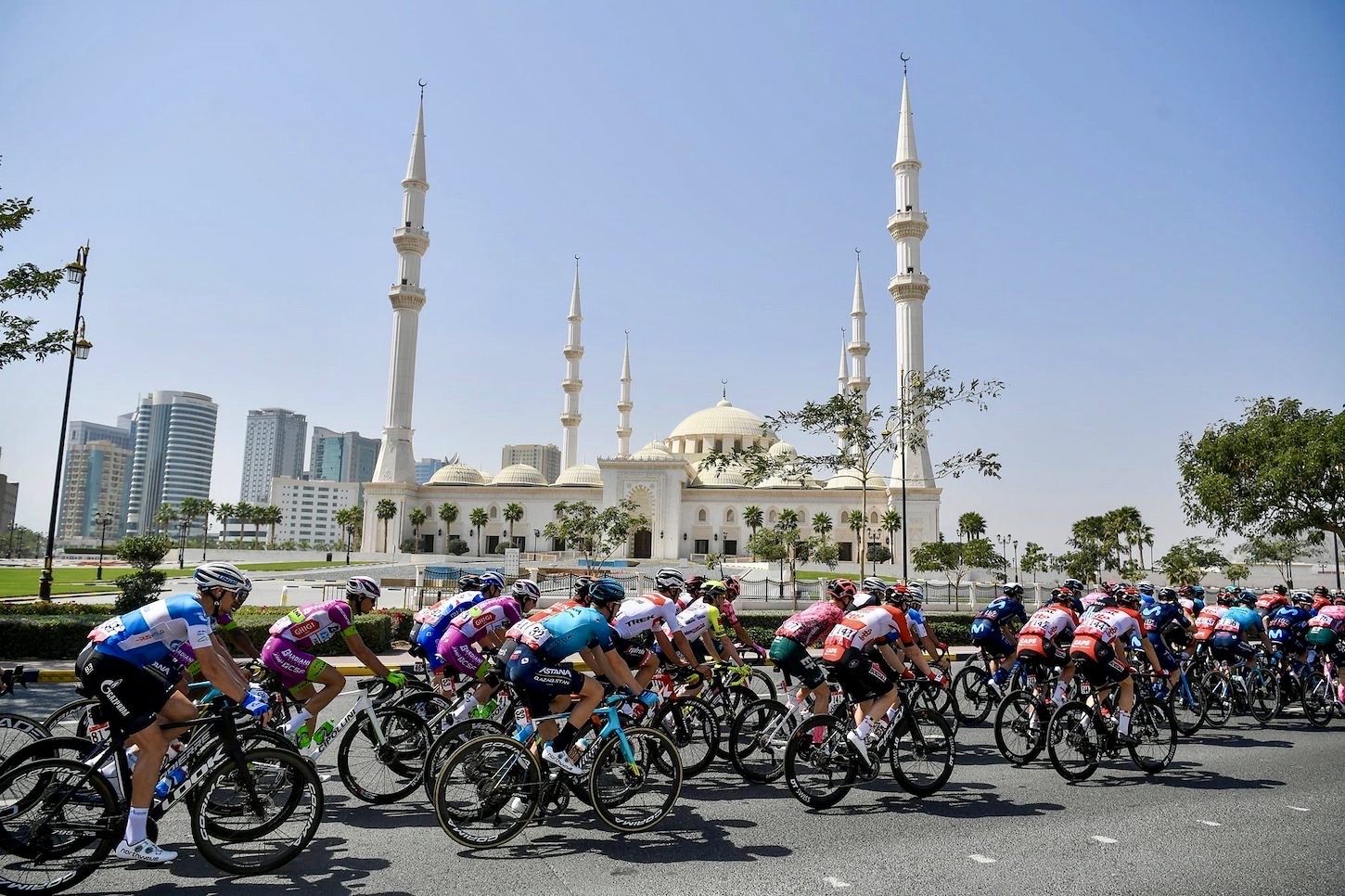 In what was always likely to be a day for the sprinters on the run to Al Marjan Island, Alpecin-Fenix did brilliantly to put their star man in position to deliver before a bit of chaos caused alarm.

Easily visible in his green jersey as leader of the points classification, Philipsen found a wheel after his lead-out man broke a chain, peeled off with a 200 meters to run and had too much in the tank for Olav Kooij (Jumbo-Visma) and Sam Bennett (Bora–Hansgrohe).

“It was a nice finish and we lined up well with the team, with a good plan,” Philipsen said. “Then with the final kilometer, my lead man lost his chain so it was chaos to find a good wheel. But in the end it all came out well, so super happy.”

After securing his second stage of the race, Philipsen added: “Winning is never boring so it is the same feeling.”

Meanwhile, Pogačar retained his lead at the head of the race, but there were moments of alarm for the Slovenian rider.

With a little over six kilometers to go, he was brought to a halt by a puncture.

He got back on with under two kilometers remaining, and was shepherded to the finish line by his team.

The two-time Tour de France champion ended up increasing his lead in the general classification by two seconds to four over Filippo Ganna (Ineos Grenadiers), as he took time in the intermediate sprint.

Three riders from Gazprom-RusVelo, Dmitry Strahkov, Pavel Kochetkov and Michael Kukrle attacked, along with Alessandro Tonelli (Bardiani-CSF-Faizanè) attacked from the outset of the stage.

However, the quartet was caught after 40 kilometers. Meanwhile, crosswinds caused an acceleration and then a split in the peloton, with Adam Yates and Filippo Ganna (Ineos Grenadiers) finding themselves caught out by the brief separation.

Back up front, Pogačar and Philipsen contested the first intermediate sprint, in the red leaders and green points jerseys respectively. The bonus seconds gained by Pogačar meant that he has extended his lead in the general classification.

The peloton came back together after 20 kilometers apart, with Strahkov, Tonelli and Kochetkov were again part of a breakaway that also included Johnatan Cañaveral of Bardiani-CSF-Faizanè. Strahkov claimed the second intermediate sprint, before the attack was swept up by the peloton.

With 31 kilometers to go, Kukrle attacked again, and remained alone out front until 2.8 kilometer to the finish.

Inside the final 7 kilometers, Pogačar faced a brief moment of danger when he punctured, but the Slovenian quickly made it back to the bunch and continued his overall lead in the race as a result.

In the sprint, Israel-Premier Tech kicked their lead-out off first, aiming to deliver Rudy Barbier in a prime position. Bora-Hansgrohe then took to the front, but Sam Bennett went early and could not keep up with Philipsen when he finally launched his sprint.

Kooij rounded Bennett in the final meters to take second, while Philipsen was able to enjoy his victory in front.