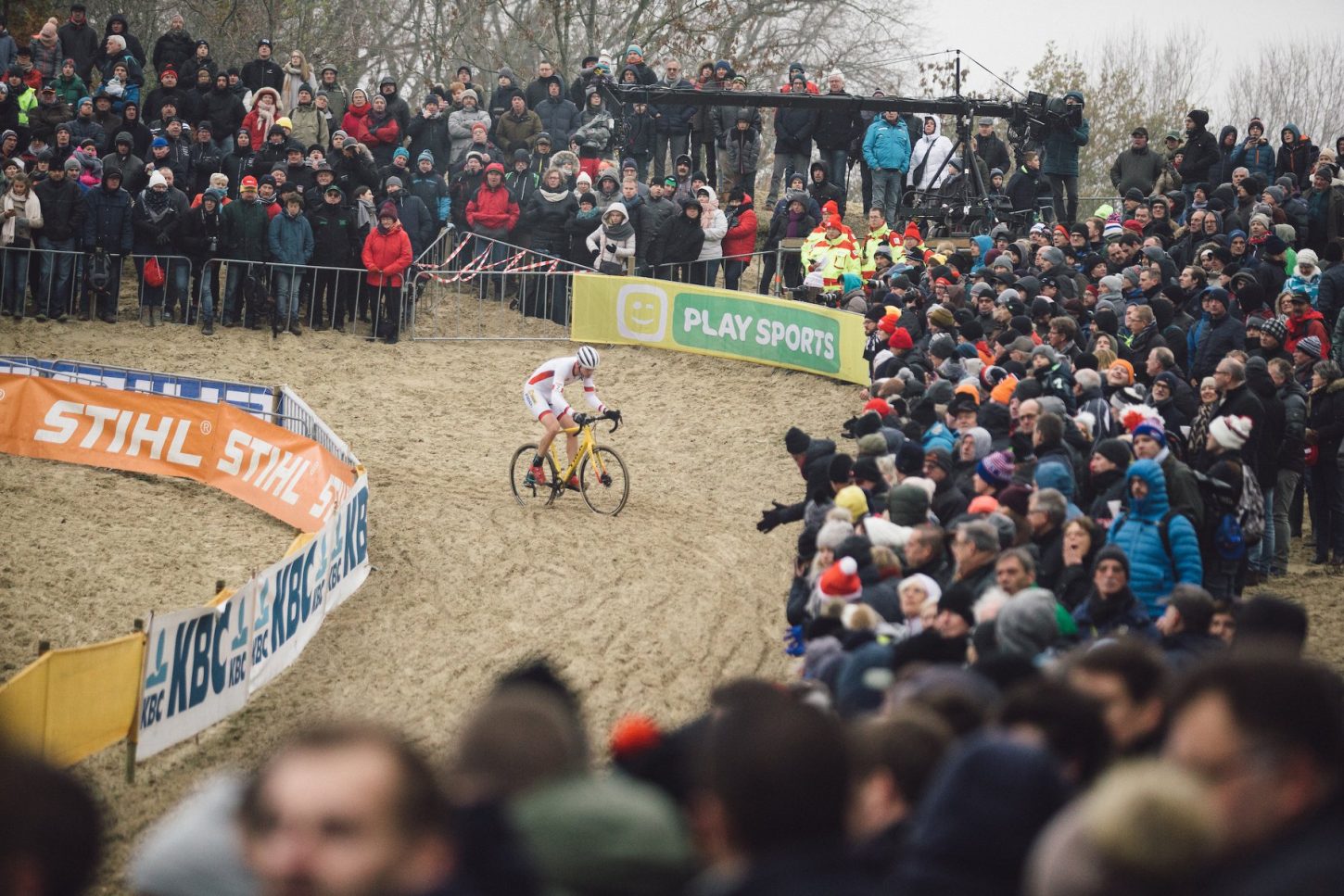 The 51st edition of the Dunecross in chilly Koksijde (Belgium) marked the halfway point of the Telenet UCI Cyclo-cross World Cup. Mathieu van der Poel (Corendon-Circus) and Denise Betsema (Marlux-Bingoal) took the Elite victories on the fog-covered course through the sand dunes by the North Sea.

Mathieu van der Poel, 23, led 47 riders over the first dunes, and was the only rider able to clock lap times below 7 minutes. Twenty-five seconds behind the European Champion, UCI World Champion Wout van Aert (Belgium) overcome early struggles to finish second, with Toon Aerts (Telenet Fidea Lions) in third place, which was enough to hold on to his World Cup lead.

In the women’s race, and early lead group of four was joined halfway through the race by 4-fold Koksijde winner Katherine Compton (USA) and 25 year-old Betsema. The latter eventually rode solo to the biggest win of her career. Nikki Brammeier (Great-Britain) was second ahead of European Champion Anne-Marie Worst (Steylaerts-777). In 12th place, Marianne Vos (Waowdeals Pro Cycling Team) remains atop the World Cup standings with a bonus of nine points over UCI World Champion Sanne Cant, 7th in Koksidje.

Ceylin Del Carmen Alvarado finished fourth and was by far the winner in the Women U23 category. World Cup leader Evie Richards (Trek Factory Racing CX) remains in the lead after her 9th place.

Thomas Pidcock (Great-Britain) punctured early on in the Men U23 race but bounced back to claim a solo victory – and strengthen his lead in the standings – ahead of an impressive Antoine Benoist (France) and Jens Dekker (Netherlands). UCI World Champion Eli Iserbyt (Belgium) punctured too and he finished a distant eighth.

A 25 year-old Dutch mother of two, Denise Betsema switched focus from mountain bike to cyclo-cross last year, already cracking the top-10 in several smaller races. She finished 25th at her only World Cup participation, in Bogense, venue of the 2019 UCI World Championships. This year, she has gone from strength to strength, finishing 13th in Bern, 5th in Tábor and now capturing the win in Koksijde. “It’s morale-boosting to know that you can beat the best with the eye on the World Championships,” she said. “I’ve learned to set my goals high enough.”