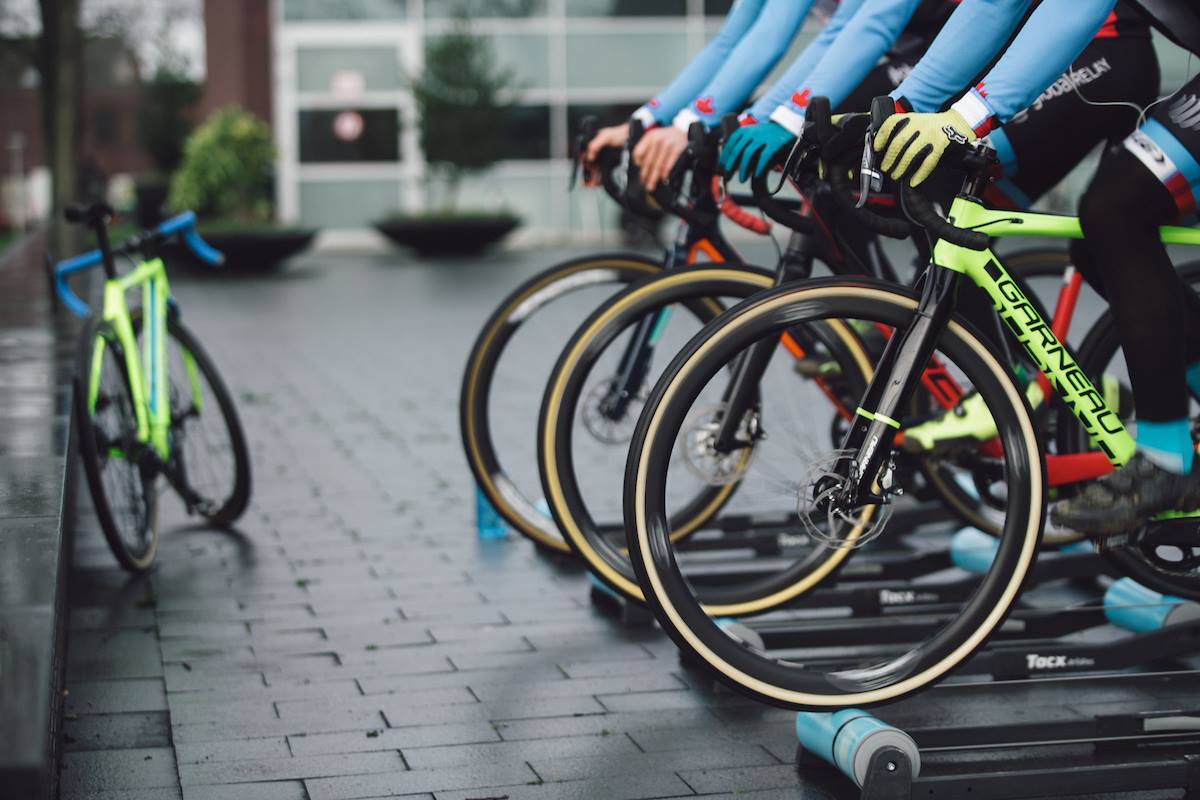 The ninth and final round of the season’s Telenet UCI Cyclocross World Cup was contested in Hoogerheide (the Netherlands), in the Noord-Brabant region, on the last Sunday of January. One week ahead of the Valkenburg-Limburg 2018 UCI Cyclo-cross World Championships, race organiser Adrie van der Poel designed a fast and technical 2800m course in his hometown. A top notch starting field with no less than 256 riders from 19 countries showed up on a windy, grey but relatively warm day.

Straight from the start, Mathieu Van der Poel (Corendon-Circus) powered away from his 72 rivals, clocking the fastest lap of the day in the process. His arch rival Wout Van Aert needed a full lap before he was able to launch his pursuit. By that time, Van Aert was 15 seconds down on Van der Poel, and for most of the race the gap hovered between 15 and 23 seconds. Late in the race, the gap lessened but Van der Poel was never severely threatened. He took his seventh UCI World Cup win of the season, confirming his first overall World Cup victory. Van Aert was a close second in Hoogerheide and finishes second overall. Michael Vanthourenhout (Marlux-Bingoal) won the battle for third place over Laurens Sweeck (ERA-Circus). Toon Aerts (Telenet Fidea Lions) finished seventh in Hoogerheide which was enough to hold off Vanthourenhout for third place overall.

UCI World Champion Sanne Cant (BEL) was already certain of her third overall victory in the World Cup. Nevertheless, she seemed keen to test her form after suffering some illness last week. Italian Champion Eva Lechner (CLIF Pro Team) took a blistering start and from the 62 starters only Cant was able to keep up. During the second lap, young Evie Richards (Trek Factory Racing XC) clocked the fastest lap time of the race, and by half way was closing in on the two leaders together with French Champion Pauline Ferrand-Prévot (Canyon // SRAM Racing) and Jolanda Neff (Kross Racing Team). Cant powered away from Lechner and completed her solo until the finish, taking her fifth World Cup win of the season. Behind her, a spectacular crash on the slippery off-camber descent took out Ferrand-Prévot and Neff.

Lechner narrowly held off Richards for second place and finishes third overall in the World Cup. Seven-fold UCI World Champion Marianne Vos (Waowdeals Pro Cycling Team) won the sprint for fourth place ahead of Kaitlin Keough (USA). That was more than enough for Keough to hold onto second overall in the Telenet UCI Cyclocross World Cup.

Thanks to her third place in the Women Elite category, Evie Richards was the winner in the Women Under 23 category. Fleur Nagengast (Telenet Fidea Lions) is the overall winner in this category. In the Men Under-23 category Thomas Pidcock (Great-Britain) was already certain of the overall victory. Despite an early crash he finished as runner-up behind Eli Iserbyt (Belgium). Tomas Kopecky (Czech Republic) is the overall World Cup winner in the Men Junior category after finishing fourth in a race that was won by Niels Vandeputte (Belgium).

In a race category that is dominated by Mathieu van der Poel and Wout Van Aert, most other riders will target the bronze medal at the UCI World Championships in Valkenburg-Limburg. Among those contenders is Michael Vanthourenhout. The Belgian rider twice won the Valkenburg World Cup round in the Men Under-23 category. Back in 2015, he captured his first Elite World Cup podium result in CrossVegas. Since then, he has managed at least one World Cup podium result every season. Last year, that was again in CrossVegas and… in Valkenburg. This year, he had to wait until the final round in Hoogerheide to get that podium result. Just like last year, he finished fourth overall in the Telenet UCI Cyclocross World Cup. Hitting peak form just in time for Valkenburg?