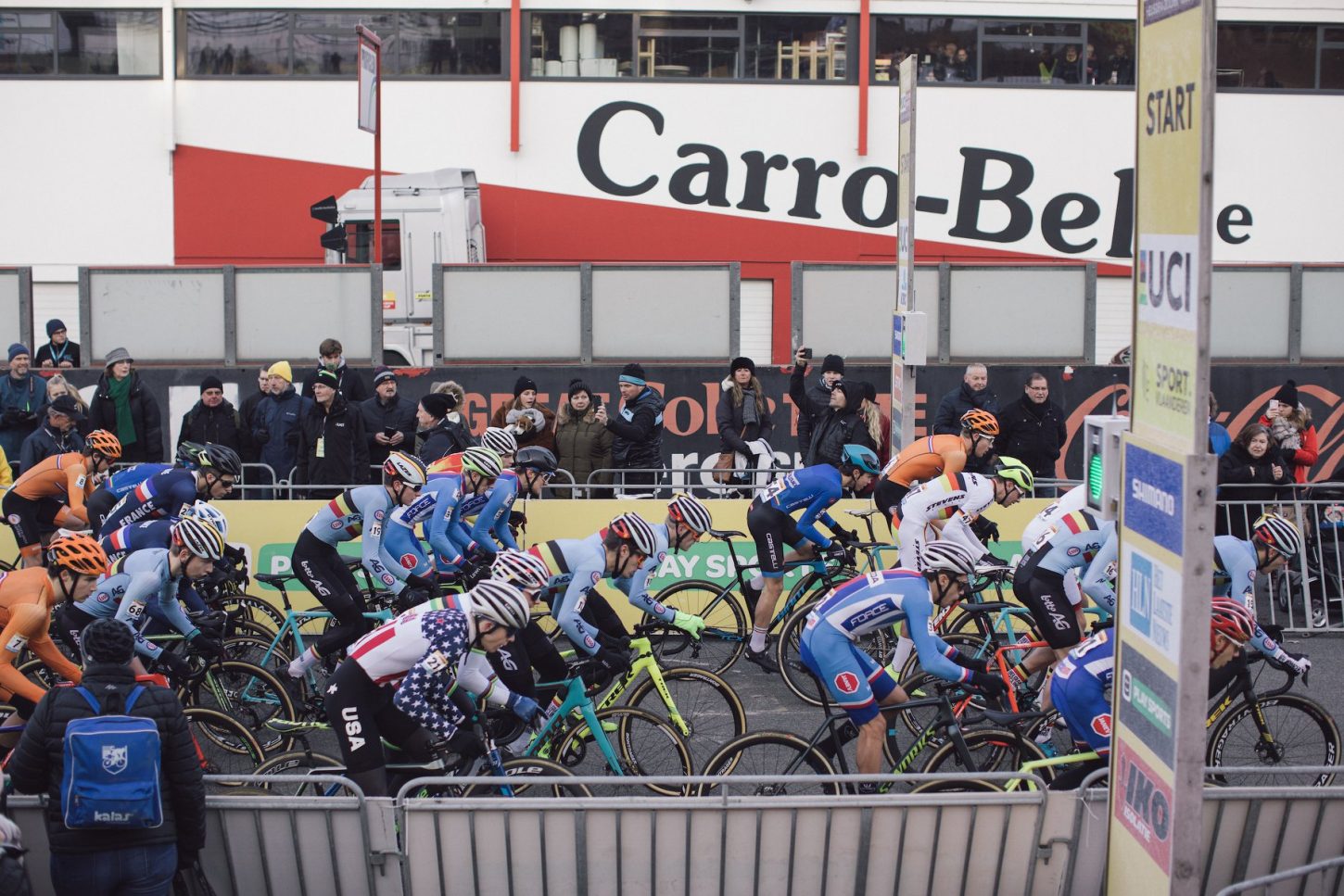 Boxing Day offered the cyclo-cross fans a splendid day of action at the former F1 car racing circuit in Heusden-Zolder (Belgium) where the seventh round of the Telenet UCI Cyclo-cross World Cup was contested. In stark contrast to the mudfest at the Namur citadel three days earlier, the post-christmas conditions in Heusden-Zolder were cold and dry thus blistering fast. Unbothered by the conditions, Mathieu van der Poel (Corendon-Circus) dominated both Namur and Heusden-Zolder in the Men Elite category. Marianne Vos (Waowdeal Pro Cycling Team) won the race in the Women Elite category.

An early puncture from UCI World champion Wout van Aert (Belgium) initiated an acceleration from World Cup leader Toon Aerts (Telenet Fidea Lions). Twenty minutes into the race Van der Poel made his move and powered away from Aerts and Michael Vanthourenhout (Marlux-Bingoal). The European champion completed yet another impressive solo and took his fifth consecutive World Cup win. Behind him, Vanthourenhout dropped his chain and disappeared from the top-10. Van Aert went up and over Aerts and steamed towards second place. Twenty-two year old Joris Nieuwenhuis (Development Team Sunweb) surprised by taking third place, well ahead of Aerts. The latter narrowly remains in the World Cup lead ahead of Van Aert with only two rounds remaining.

Shortly after the start of the Women’s race with 87 riders, a crash near the front of the pack took down European champion Annemarie Worst (Steylaerts-777). Despite an early move from Marianne Vos, a tactical race unfolded in which Vos recovered halfway from a dropped chain and everything would be decided in the final lap. Vos excelled in the final technical sections of the 3.1km long course and gapped Dutch champion Lucinda Brand (Team Sunweb) and UCI World champion Sanne Cant (Corendon-Circus). Vos took her seventh Heusden-Zolder victory and extends her World Cup lead over Cant.

Shortly behind the top-3, Ceylin Del Carmen Alvarado (Corendon-Circus) finished fourth which was more than enough to win the Women Under 23 race. She takes over the lead in the World Cup standings from Fleur Nagengast (Telenet Fidea Lions), fifteenth in Heusden-Zolder.

In absence of World Cup leader Thomas Pidcock (Great-Britain) and Antoine Benoist (France), UCI World champion Eli Iserbyt (Belgium) took a commanding victory in the Men Under 23 category, well ahead of Maik van der Heijden (Netherlands). Thanks to his second World Cup win of the season, Iserbyt moves up to second place in the World Cup standings behind Pidcock.

The Telenet UCI Cyclo-cross World Cup podium was treated with a fresh face in Heusden-Zolder on Boxing Day. Dutch rider Joris Nieuwenhuis (Development Team Sunweb) cracked the podium in the Elite category for the first time in his career. He finished at short distance from Van der Poel and Van Aert. He’s an expert in Heusden-Zolder as he twice won the Men U23 World Cup rounds in 2015 and 2016. Three days earlier, a mud-clad Nieuwenhuis managed his best World Cup result at the World Cup round in Namur by finishing fourth. He crossed the finish line while playing some air guitar. Why were the cyclo-cross fans treated to some rock & roll? Nieuwenhuis celebrated earning his own reward for cracking the top-5 at the highest level: a new electrical guitar.

Injuries and illness marred most of the 2017-2018 season but clearly, the 2016-2017 UCI Cyclo-cross  overall World Cup winner and 2017 UCI Cyclo-cross World champion in the Men Under 23 category managed to take the next step in his career. He’ll combine cyclo-cross and a road campaign at the highest level with Team Sunweb in 2019.