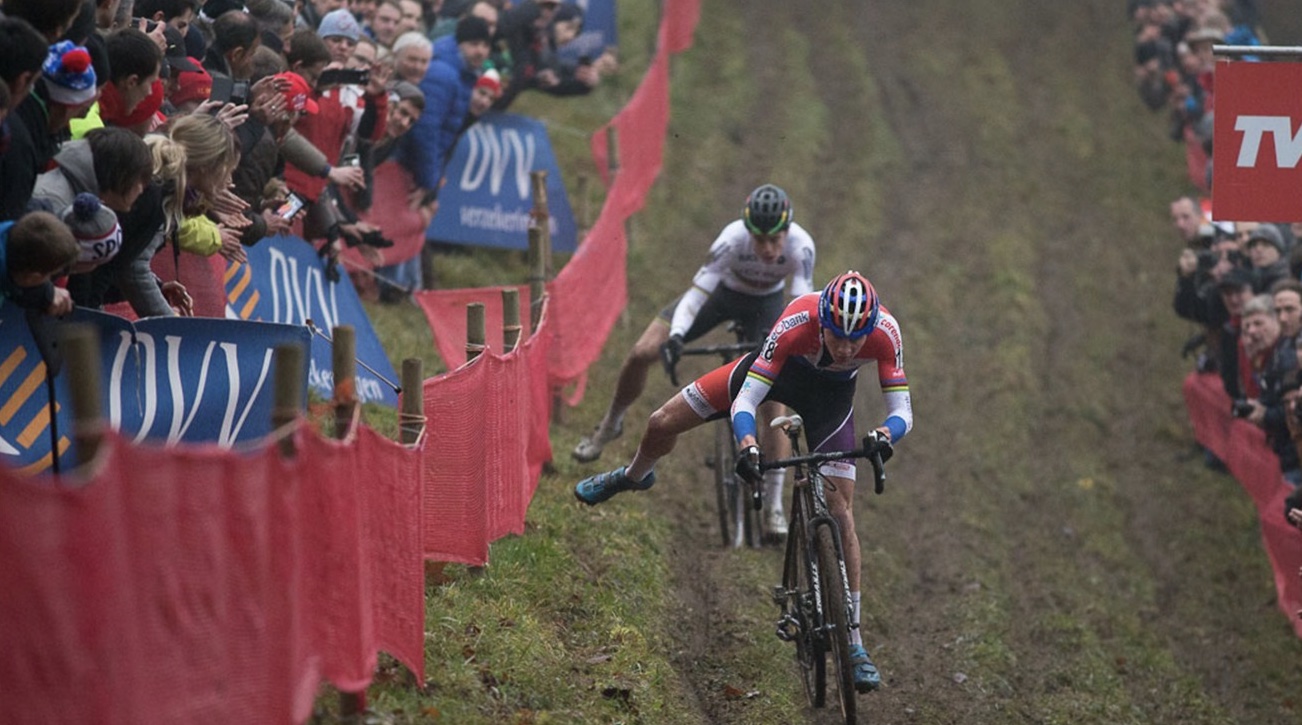 The sixth round of the Telenet UCI Cyclo-cross World Cup took place at the citadel in Namur, Belgium, on a course known for its countless steep climbs and drops and tricky off-camber descent.

The fascinating duel between Dutch Champion Mathieu van der Poel (Beobank-Corendon) and UCI World Cup leader Wout Van Aert (Crelan-Vastgoedservice Continental Team) was eventually won by the Dutch rider who powered away on the steepest climb of the course. It was the seventh consecutive World Cup win for Van der Poel, who’s now unbeaten in the World Cup for a year. Kevin Pauwels (Marlux-Napoleon Games) rode a strong race to finish third. Van Aert now holds 370 points and strengthens his lead in the World Cup standings over Pauwels (294).

In the Women’s race, Czech rider Katerina Nash (Luna Pro Team) won in Namur for the second time in her career, riding in front the whole way. At first the 39-year-old rider battled with team-mate Eva Lechner (Luna Pro Team) but the Italian Champion dropped back with a flat tyre. Nash had mechanical problems too during the fourth of six laps and World Cup leader Sophie de Boer (Kalas-NNOF) bridged up. In the final lap De Boer also had a flat tyre and Nash rode away towards victory. Lechner managed to overtake De Boer to grab second place. In the World Cup standings De Boer now totals 323 points, increasing her lead over Sanne Cant (IKO Enertherm-Beobank), 13th in Namur.

– What you should know about the Heusden-Zolder World Cup round –

Heusden Zolder has been part of the UCI World Cup series since 2008, and has twice hosted the UCI Cyclo-cross World Championships (2002 and 2016). Riders tackle a fast course up and around the car racing rack, Circuit Zolder. The circuit features a small hill, the “Sacramentsberg” with a chapel on top. At one point on this climb is an area where fans are not permitted, providing a break from noise for the athletes.

The site also features a BMX track, which hosted the UCI BMX World Championships in 2015 and will repeat the organization in 2019.

Belgian rider Kevin Pauwels (Marlux-Napoleon Games) has been riding at the highest level for a decade. Ever-consistent in the UCI World Cup, the 32-year-old has won the overall twice. UCI World Champion as a Junior and as an U23 rider, Pauwels has still to claim the Elite title, which would see him winning in every category, a feat only Lars Boom and Niels Albert managed up until now.