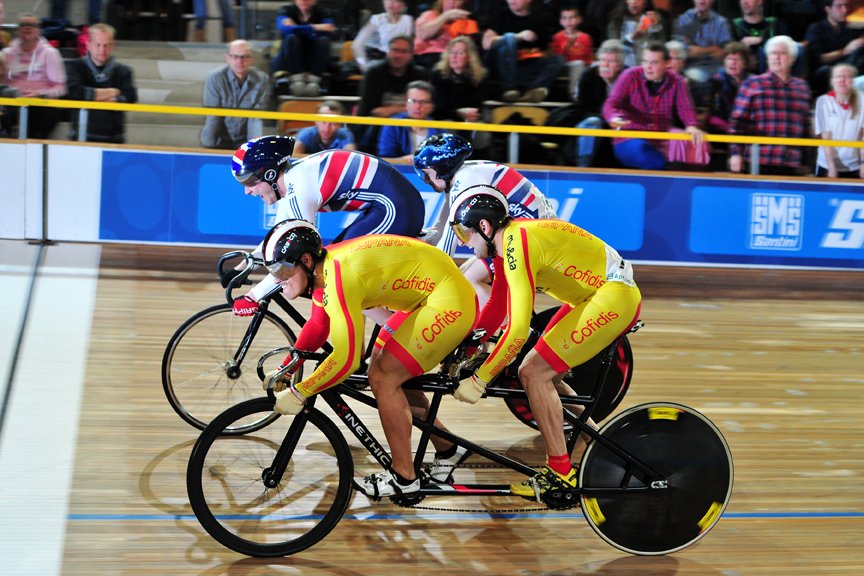 China’s para-cyclists set the tone on the first day of the 2016 UCI Para-cycling Track World Championships by seizing four gold medals on Thursday at the Montichiari velodrome in Italy.

The biggest surprise by far came in the women’s C2 individual pursuit, where Dutch rider Alyda Norbruis, winner of three world titles in 2015, was beaten in the final by China’s Sini Zeng.

Norbruis had seemed to establish her dominance in qualifying by covering the 3,000-metre race distance 1.352 seconds faster than Zeng. But the Chinese rider edged out her rival by 0.811 seconds in the final to snatch the gold medal.

China’s Jufang Zhou had secured gold in the time trial in 2014 by beating the C5 world record. On Thursday, she regained her crown.

Covering the 500 metres in 37.389 seconds, the Chinese rider got the better of the 2015 World Champion, Great Britain’s Sarah Storey, who finished with 37.589. The podium was completed by another British representative, Crystal Lane (37.796).

The opposite occurred in the C4 class: London Paralympic Champion and reigning World Champion Jianping Ruan had to settle for silver this time. Victory went to the British rider Kadeena Cox, who recorded a hugely impressive time of 37.456 seconds (new world record), ahead of the Chinese rider by 0.379.

The gold medallist in the women’s C1 pursuit, Jieli Li was the only athlete in her class and so did not have to face a rival in the final.

The Chinese men did not go empty-handed either: in the men’s C1 pursuit, Zhangyu Li overcame Canada’s Ross Wilson in the final after beating the world record in qualifying (3 min 51.961 secs).

Great Britain’s para-cyclists had nothing to be ashamed about with their haul of medals on Thursday, taking to the top step of the podium on three occasions.

In addition to Kadeena Cox, Megan Giglia and Jody Cundy also earned themselves a gold medal.

Jody Cundy demonstrated that he is still the master of the C4 kilometre. The reigning World Champion and world record holder smashed the opposition with a time of 1 min 4.654 secs. His nearest rival was Slovakia’s Jozef Metelka who was forced to concede 1.392 seconds.

Nine UCI World Champions will be crowned today. The men’s and women’s finals in the C1, C2 and C3 time trial will be contested as well as the B class tandem pursuit finals. The women’s scratch race final for the combined C1, C2, and C3 classes will also be held.