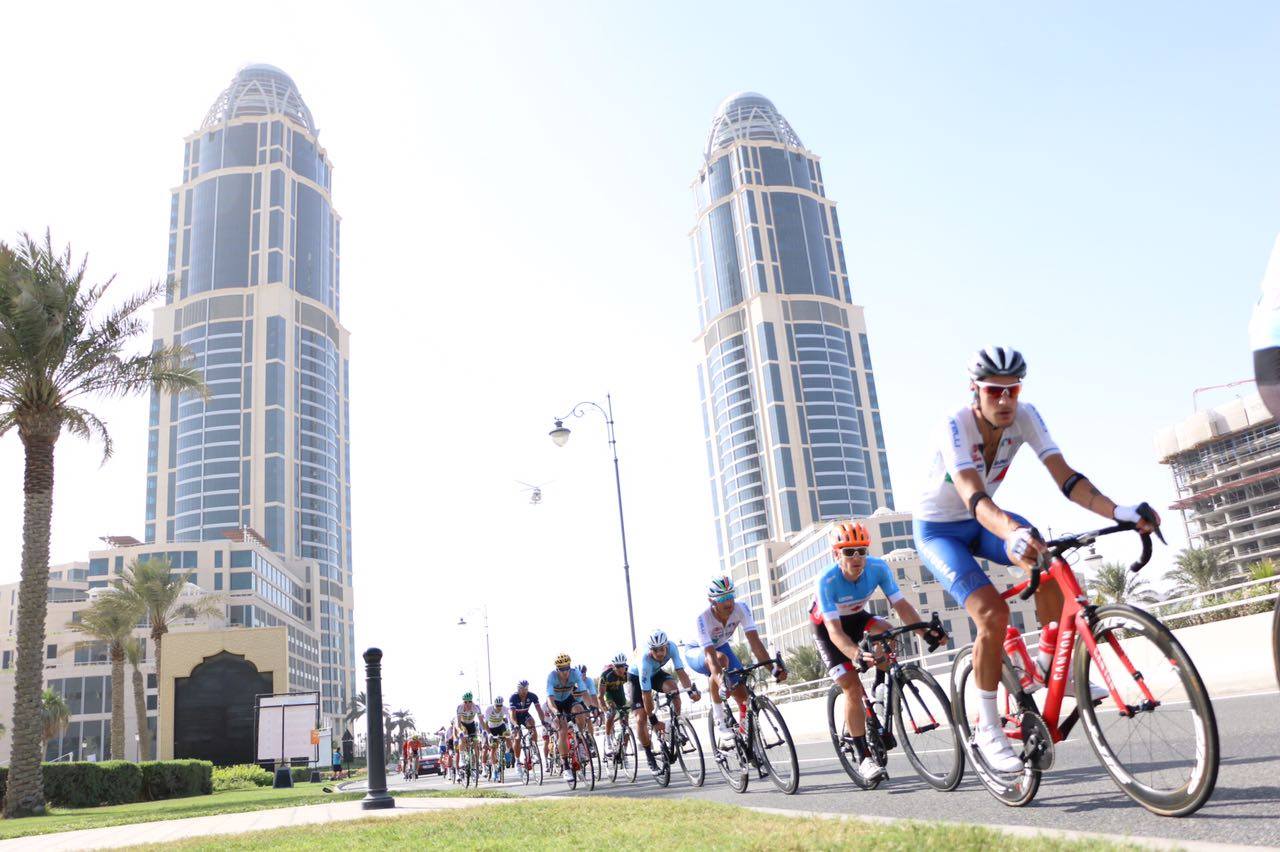 “I don’t believe it. I’m still in shock,” Sagan said. “I’m very happy because there was a crosswind and I was the last one to make the first group. In the end, it was a sprint so we should see.

“There was a bit of a headwind so I felt I needed to come from the back. I felt I was lucky because [Giacomo] Nizzolo didn’t close me out. If he closed me out for sure we would have crashed because I wasn’t going to brake. We should have crashed but I’m happy. It’s unbelievable.”

Today’s race was marked by high winds and heat, with team Belgium splitting the peloton early-on to create a 30-rider lead group that would maintain its advantage until the finish.

Amongst the riders that didn’t make the split were race favorites Marcel Kittel, Caleb Ewan, Nacer Bouhanni, and Andre Greipel.

Upon entering the finish circuits around Pearl Island, Niki Terpstra and his teammate Tom Leezer (the Netherland) attempted late attacks before team Belgium once more tick control of the lead group.

Cavendish and Sagan marked each other carefully, but when the world champion chose his line along the barriers through a small gap left by Giacomo Nizzolo (Italy), Cavendish was forced to briefly pause during the closing 150 meters – allowing Sagan to ride clear.

The escapees initially opened up a modest advantage over the peloton. However, after 30 kilometers of racing, their gap stretched out to more than 11 minutes.

Back in the peloton, team Belgian began upping the pace, subsequently causing the main field to shatter with 150 kilometers to go.

This move proved to be the defining moment in today’s race, as several big nations like Germany, France, Spain and the Netherlands found themselves detached from the front. Even Cavendish found himself with only only British team-mate – Adam Blythe.

Having the advantage in numbers, team Belgian continued to upped the pace in the lead group.

A short while later, the remnants of the days breakaway group were caught, as the lead group’s gap continued to grow to more than two minutes as they hit the final seven 15.2 kilometer finishing laps around Pearl Island.

Despite a valiant effort to bridge to the leaders, both Degenkolb and Kittel both dropped out inside the final 50 kilometers, looking completely spent.

With 40 kilometers to go, the lead group had gained another minute over the dwindling number of chasers, pushing their advantage out to three minutes.

Into the final two laps of Pearl Island, team Italy was sharing the pace-setting with Belgium, with Australia, Norway and Britain just behind. The impetus of the chase faded and it was clear the winner would be decided from the front group.

Heading into the final lap, the lead group was strung out behind the remaining Belgian riders. As the Belgian workers dropped out one by one, Italy moved to the front inside the final 10 kilometers.

Terpstra was the first to try and launch an attack inside the final 5 kilometers, but was quickly snubbed out. Fellow Dutchman Tom Leezer then launched a move with 2 kilometers to go and opened up a gap.

With Leezer caught in the final 500 meters, the leading contenders started to open up their sprints with Sagan taking the victory by a bike length over Cavendish, who had swerved around Matthews and lost some momentum.