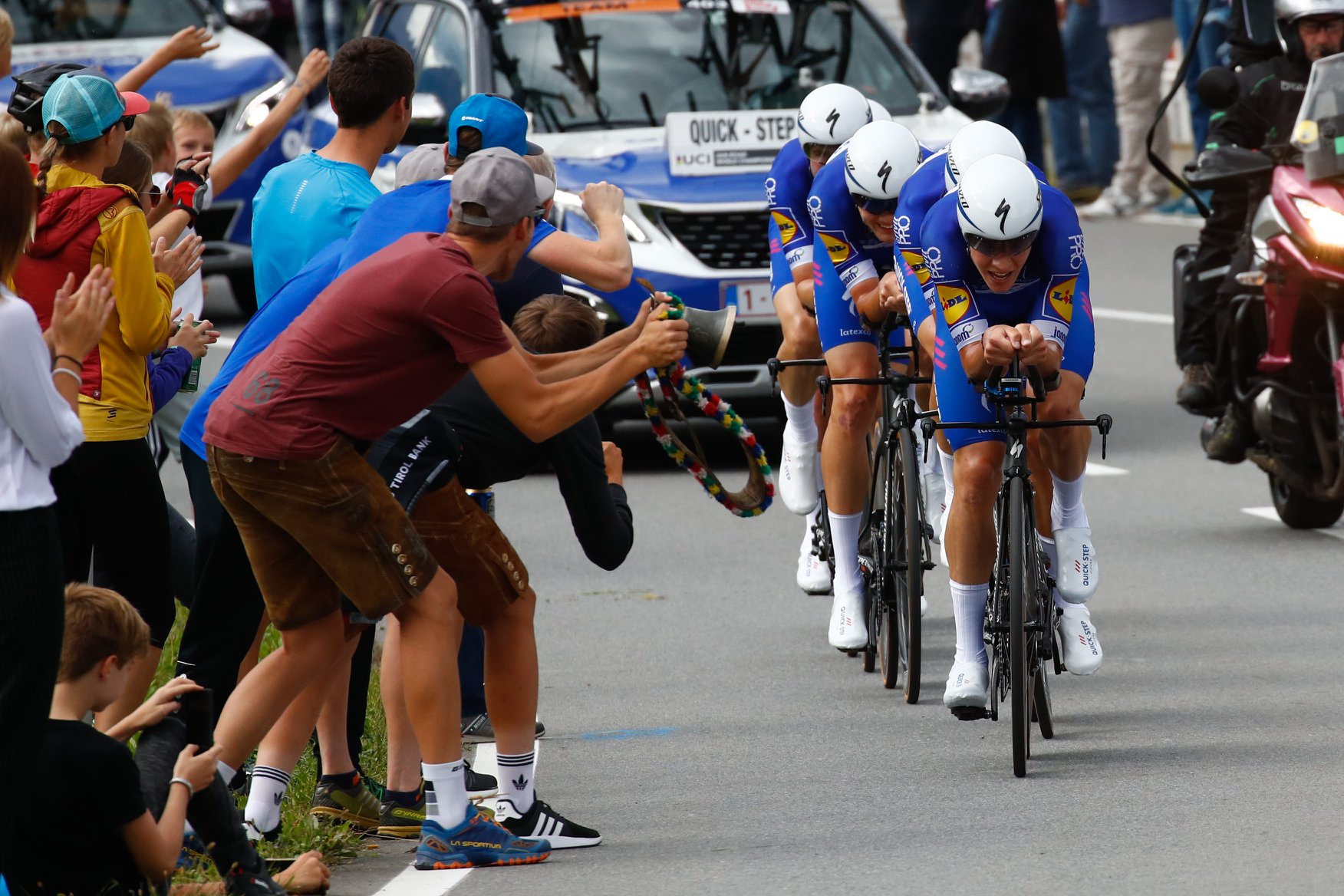 Kasper Asgreen, Laurens De Plus, Bob Jungels, Yves Lampaert, Maximilian Schachmann and Niki Terpstra put in a tremendous ride on Sunday afternoon in the last ever World Team Time Trial Championships for trade teams, stopping the clock in 1:07:26 after averaging 55.6km/h over the 62.8 grueling kilometers of the course and taking the gold medals in Austria, as well as adding the rainbow logo to their jerseys.

Victorious in 2012 (Valkenburg), 2013 (Florence) and 2016 (Doha), Quick-Step Floors were again one of the top contenders and rode with huge confidence as they left the start house in Ötzal, posting the third-fastest time at the first intermediate and using the 4.6km-climb averaging 5.6% which featured inside the last 20 kilometers to their advantage, pulling back time from the teams which lied ahead on the leaderboard and blasting through the last checkpoint just hundreds of a second behind first place.

The slopes of the challenging ascent wreaked havoc for many teams, with Ag2r-La Mondiale crawling at the peak, to wait for their essential fourth rider.

Once all had reached the top of the greatest test of the event, the quickest performance was held by Team Sunweb but their 50-00-21 was only 1s faster than the time set by Quick-Step Floors, and 4s faster than BMC.

Next in line was Team Sky, a full 31s back, marking them and others out of podium contention with just over 17km left.

At the finish line, Mitchelton-Scott briefly made their way to the hot seat, with 1-08-22, but were out before they sat down, with Quick-Step Floors clocking 1-07-26 at an average speed of 55.5kph.

Team Sky finished without troubling the podium, 44s slower than the blue train. BMC, on arrival, shifted Team Sky from second place, but were still just under 20s behind the riders in the hot seat.

With 2 kilometers remaining, the final team on the course, Sunweb, was 18s down, the chance of victory by this point impossible. Their final time remained at 18s slower than the winners leaving Quick-Step to celebrate their fourth victory at the event which will never be run in this format again.